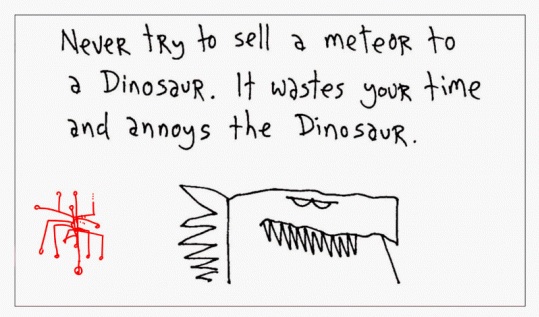 Financial Industry as Organized Crime: A new documentary film “Inside Job”, demonstrates that the recent hijacking and sinking of the global economy was a deliberate criminal conspiracy by the financial industry. The collapse of the Soviet Union was followed by the takeover of their economies by organized crime. It appears the criminals in the US couldn’t be bothered to wait for the collapse of that country’s society. Salon interviews the film’s writer/director.

Here Comes the Rage: Ilargi argues that Obama has now shown total inability as a leader in all three of the key crisis areas facing us in the decades to come: economy (bailouts), energy (offshore drilling), and ecology (BP disaster). Unfortunately, this will just make most people look for another leader to take his place, instead of realizing that no one can solve these problems for us.

Closing the Barn Door: Sharon Astyk explains why political solutions are always designed to “fix” yesterday’s crises, not to avert future ones. “Now we’re concerned about everything.” Too late, my brother, too late, but never mind.

The Anti-Psychiatry Movement: Last month Toronto hosted an international meeting of “victims” and “survivors” of psychiatry. Speakers and attendees argued it is a pseudo-science whose fraudulent practitioners work in concert with Big Pharma to pathologize and profit from the perfectly understandable anxieties we all feel in this horrifically overcrowded, crisis-riven, violent global society. They claim, persuasively, that it is our culture, not us, that is sick and needs to be fixed. Of course the political and corporate powers were outraged and are lobbying to prevent public funds being used for such exposes in future.

ADHD Linked to Pesticides; Cancer Linked to Chemicals; Slaughterhouse Work Linked to Crime: New studies suggest that industrial chemicals in our air, water and food are not only poisoning our bodies, they are damaging our brains, and that they are a major cause of cancers. Thanks to Tree for the links. In the same vein, Prad links us to an article showing that industrial slaughterhouse workers not only become desensitized and deranged by their work, they are also prone to commit crimes in their communities.

Immigration’s Generation Gap: I argued last year that two of the biggest social issues of the coming decade would be immigration and the right to die. A new study suggests that boomers, who tend to be progressive on most issues, are the opposite on immigration issues, and that the issue substantially pits the young against the old.

Listening Posts: Quarterly meetings of reflective citizens, to see what is emerging as the consensus of what is really happening in the world. “A sharing of preoccupations and experiences.” Thanks to Amy Barnes for the link.

Consensus Decision-Making: A link by Jeff Patton to four articles by Laird Schaub (who I just met last week) on better decision-making through consensus. A good companion to Tree’s consensus articles.

Going Mainstream, Selling Out: What is it about fame, position and the spotlight of the mainstream media that makes courageous progressives turn into cowardly, don’t-rock-the-boat conformists? Keith Farnish calls out Joss Garman.

California, Going Broke: Sam Mills’ story shows how one state is abusing its citizens in its effort to cut costs.

Real-Time View of Ships in the Salish Sea, from fellow Bowen Islander Bob Ballantyne (not limited to the Salish Sea; you can see location and details of ships in all major shipping areas of the world). Note: Doesn’t work in Firefox.

Meetings, Bloody Meetings: A hilarious take from Ann Nichols on everyone’s least favourite activity. Add this blog to your blogroll. Thanks to Tree for the link.

The Secret Life of Plants, from the BBC (thanks to Dale Asberry for the link)

How Recipes Should Look, link from Jerry Michalski‘s amazing Twitter feed (as are the two items that follow)

Real-Time Visualization on Steroids, from Britain’s Royal Society for the Arts

Civilization: “Are you tired of primitive living?” A great video satire. Thanks to Paul Heft for the link.

From Pamela Slim (via Gaping Void): You, less than, is a lie. Remember who you are.

From AV Flox (also via Gaping Void): A child would not hesitate to pack up a sleeping bag and sleep on a pier under the stars with you. (Thanks too to Hugh Macleod at Gaping Void for the cartoon at the top of this post).

From Imagine Alternatives (via Tree): Finding ways not to call the police.

From Rumi (via Panhala)

Let yourself be silently drawn
by the strange pull of what you really love.
It will not lead you astray.

From Melissa Moore: On the Eve of Turning 12