Not much to say this month as an intro to the links below; I think yesterday’s post about the insanity of our inexhaustible search for large-scale ways to save us from us sums up where I’m at: Full of joy, puttering away at learning to be present, and contributing as best I can to a thousand small sanities. 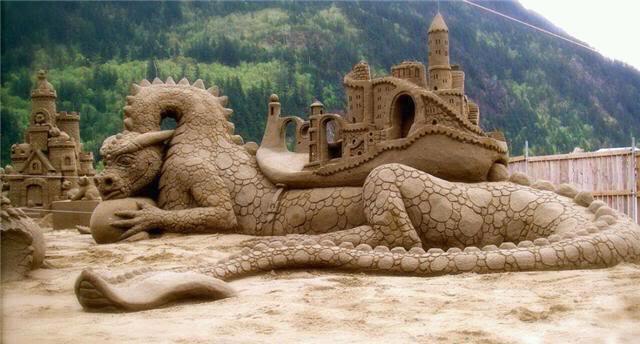 sand sculpture in honour of the year of the dragon — online in several places, source unknown

What Am I To Do With Feelings Like These?: Paul Kingsnorth’s Pilgrimage: This month’s Orion features a tour de force of passionate, sensitive writing about how the environmental movement has lost its way, and what he’s doing now as a result, from Dark Mountain co-founder Paul Kingsnorth, his best work I think since the Manifesto. Two excerpts from this lovely piece of writing (but please go read the whole article):

I look out across the moonlit Lake District ranges, and it’s as clear as the night air that what used to come in regular waves, pounding like the sea, comes now only in flashes, out of the corner of my eyes, like a lighthouse in a storm. Perhaps it’s the way the world has changed. There are more cars on the roads now, more satellites in the sky. The footpaths up the fells are like stone motorways, there are turbines on the moors, and the farmers are being edged out by south-country refugees like me, trying to escape but bringing with us the things we flee from. The new world is online and loving it, the virtual happily edging out the actual. The darkness is shut out and the night grows lighter and nobody is there to see it.

It could be all that, but it probably isn’t. It’s probably me. I am thirty-seven now. The world is smaller, more tired, more fragile, more horribly complex and full of troubles. Or, rather: the world is the same as it ever was, but I am more aware of it and of the reality of my place within it. I have grown up, and there is nothing to be done about it. The worst part of it is that I can’t seem to look without thinking anymore. And now I know far more about what we are doing. We: the people. I know what we are doing, all over the world, to everything, all of the time. I know why the magic is dying. It’s me. It’s us…

I don’t have any answers, if by answers we mean political systems, better machines, means of engineering some grand shift in consciousness. All I have is a personal conviction built on those feelings, those responses, that goes back to the moors of northern England and the rivers of southern Borneo—that something big is being missed. That we are both hollow men and stuffed men, and that we will keep stuffing ourselves until the food runs out, and if outside the dining room door we have made a wasteland and called it necessity, then at least we will know we were not to blame, because we are never to blame, because we are the humans.

What am I to do with feelings like these? Useless feelings in a world in which everything must be made useful. Sensibilities in a world of utility. Feelings like this provide no “solutions.” They build no new eco-homes, remove no carbon from the atmosphere. This is head-in-the-clouds stuff, as relevant to our busy, modern lives as the new moon or the date of the harvest. Easy to ignore, easy to dismiss, like the places that inspire the feelings, like the world outside the bubble, like the people who have seen it, if only in brief flashes beyond the ridge of some dark line of hills.

But this is fine—the dismissal, the platitudes, the brusque moving-on of the grown-ups. It’s all fine. I withdraw, you see. I withdraw from the campaigning and the marching, I withdraw from the arguing and the talked-up necessity and all of the false assumptions. I withdraw from the words. I am leaving. I am going to go out walking. I am leaving on a pilgrimage to find what I left behind in the jungles and by the cold campfires and in the parts of my head and my heart that I have been skirting around because I have been busy fragmenting the world in order to save it; busy believing it is mine to save. I am going to listen to the wind and see what it tells me, or whether it tells me anything at all. You see, it turns out that I have more time than I thought. I will follow the songlines and see what they sing to me and maybe, one day, I might even come back. And if I am very lucky I might bring with me a harvest of fresh tales, which I can scatter like apple seeds across this tired and angry land.

The Endless Obsession With What Might Be: My favourite non-fiction writer John Gray urges us to stop fixating on the future and learn to live in the now: “Without the faith that the future can be better than the past, many people say they could not go on. But when we look to the future to give meaning to our lives, we lose the meaning we can make for ourselves here and now.” Thanks to Euan Semple for the link.

Early Signs of Civilization’s Collapse: “This is one of the most important trends you’ll see in 2012 and beyond: Global supply lines are breaking down. The just-in-time system of deliveries on tap is deteriorating. Have you noticed how often the products or parts you need are backordered or delayed?” Thanks to Robert Volkwyn for the link.

What Love Looks Like: An interview in Orion with Tim DeChristopher, in prison for daring to disrupt the sale of oil and gas leases on public land, on non-violent resistance and having the courage to risk your freedom for what you believe. Thanks to Tree for the link and the one that follows.

How Doctors Die: Most knowledgeable doctors refuse the same aggressive end-of-live medical treatments that so many of their patients demand, and that many doctors prescribe for them.

StreetBank is “a website that allows you to see all that your neighbours are giving away or lending. It’s a giant attic, garden shed, toolkit, fancy dress chest, library and DVD collection for you and anyone living within one mile of your home.” Thanks to my neighbour Don Marshall for the link.

Who are the 1%?: Mostly doctors, lawyers, bankers, and financial and corporate executives.

Harper and His Ultra-Conservative Corporatists Wage All-Out War on Environmentalists:

Here’s an amazing and beautifully-filmed dubstep video featuring Marquese Scott dancing to a remix of the song Pumped Up Kicks (caution: disturbing lyrics). Thanks to Liz Henry for the link.

And an equally remarkable video of a crow using a bottle cap to repeatedly sled down a garage roof. Thanks to Mushin Schilling for the link, and the one that follows.

Walking backwards through time, a clever video that will make you think twice about the nature of movement, and of time.

Jonah Lehrer writes in this week’s New Yorker (full article by subscription only) that research shows non-critical brainstorming doesn’t work — debate and criticism, it turns out, stimulates rather than represses creative ideas, the best ideation groups have a good mix of people who know each other and those who do not, and the best collaborations occur face-to-face where spontaneous and unexpected meet-ups are physically likely and culturally encouraged.

A poignant essay by a once middle-class American coping with a new “first-world problem”: ever-present daily struggle and anxiety over the basic necessities of life for herself and her family. Thanks to Tree for the link and the one that follows.

How Millennial Are You?: A just-for-fun self-test. I scored 53, a typical score for someone half my age.

Seeking the Kermode Bear in the threatened BC Great Bear Rainforest, photographer Paul Nicklen had a once-in-a-lifetime experience. Thanks to Sharon Goldberg for the link.

From Wallace Stevens (thanks to Cheryl Long for the link):

From TS Eliot’s essay The Social Function of Poetry:

From philosopher Eugene Gendlin (thanks to LessWrong for this quote and the three that follow):

YOU CAN FACE REALITY

From cartoonist Tim Kreider, on being wedded to a fixed idea of the future:

Whether their motives were righteous or venal, highminded or base, noble or ig-, in retrospect the obvious verdict is that they were all morons–yes, even the distinguished fellows and visiting scholars at think tanks and deans of international studies schools. They were morons because the whole moral, political and practical purpose of their scheme depended on its going exactly according to plan. Which nothing ever does. The Latin phrase for this logical fallacy would be Duh. Some of them were halfway intelligent; some of them may even have been well-intentioned; but they lacked imagination, and this is a fatal flaw. What we learn from history is that it never turns out like it’s supposed to. And the one thing we know for sure about the future is that it won’t be like we think.

From A Softer World:

From Terry Pratchett, in the fantasy novel Making Money:

Plans can break down. You cannot plan the future. Only presumptuous fools plan. The wise man steers.

From John O’Donohue, in To Bless the Space Between Us (thanks to Chris Corrigan for the link):

FOR THE TIME OF NECESSARY DECISION

The mind of time is hard to read.
We can never predict what it will bring,
Nor even from all that is already gone
Can we say what form it finally takes;
For time gathers its moments secretly.
Often we only know it’s time to change
When a force has built inside the heart
That leaves us uneasy as we are.

Perhaps the work we do has lost its soul
Or the love where we once belonged
Calls nothing alive in us anymore.

We drift through this gray, increasing nowhere
Until we stand before a threshold we know
We have to cross to come alive once more.

May we have the courage to take the step
Into the unknown that beckons us;
Trust that a richer life awaits us there,
That we will lose nothing
But what has already died;
Feel the deeper knowing in us sure
Of all that is about to be born beyond
The pale frames where we stayed confined,
Not realizing how such vacant endurance
Was bleaching our soul’s desire.