What Makes Us Trust Someone 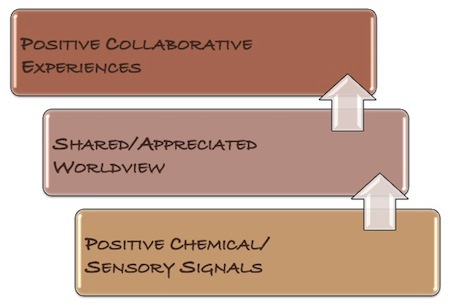 Trust is an essential requirement for an effective, functional community. Our modern, anonymous neighbourhoods provide none of the prerequisites for trust, and hence can never be true communities. In our search for community, many of us reach out instead to those outside our neighbourhoods, looking for support, or reassurance, or knowledge, or partners, or just company. But what is it that makes us trust, or distrust, someone? Is trust something that must be earned, or is it implicit, and can only be destroyed and lost?

Much has been written lately on this subject. Many would argue that trust is something that grows with mutual knowledge, openness, and sharing. I think that’s true to some extent but I believe trust is much more primal than that. It surely predated language. It is evident in non-humans who do not use language as we do, and whose social networks are not established the way ours are. Watch two dogs meeting for the first time and you’ll see what underlies the establishment and building or destruction of trust. We are, after all, much more than our minds, and our minds, I would argue, play a relatively minor role in the establishment of trust. Here’s how I think it works, based on my own observation of creatures human and non:

The destruction of trust can occur the same way, except in reverse. Have some bad collaborative experiences with someone you thought you knew and could trust, and you’ll be suspicious and disappointed, but still probably have faith that it was an aberration — after all, your instincts have told you they’re trustworthy, and you think you “know” them well enough to believe they wouldn’t normally do that. You’ll probably give them another chance, and only if you’re disappointed again will you conclude you didn’t really know them as well as you thought, and that they can’t be trusted.

Likewise, if you get into a discussion or situation that reveals that that person’s worldview — their sense of what is, and why it is that way, or their sense of what’s good or fair, is very different from what you supposed, and you’ll suspect they’re facile, or erratic, or dishonest, or even psychotic, and whatever trust you might have built between you will be destroyed.

If something should occur that changes the basic sensory or chemical signals you give off to that other person, or they send to you, then the degree of intellectual appreciation and positive shared experience you have between you can quickly become moot. You may never know what happened — it may be something that happened to you that has nothing to do with the other person, or vice versa — but somehow you just “know” that the trust you built between you is gone, and rebuilding it, through no one’s fault, will be enormously difficult.

That’s my sense of what underlies, builds and destroys trust, anyway. I tend to be more tuned in to my instincts than most people, and to trust them more than most, so perhaps my perceptions of trust are different from others’. But trust is so important, and will become much more so as we face mounting crises in the coming decades that will require us to re-create local community and to trust those in our communities. We need to know what that will entail, and the challenges building trust will present.

6 Responses to What Makes Us Trust Someone