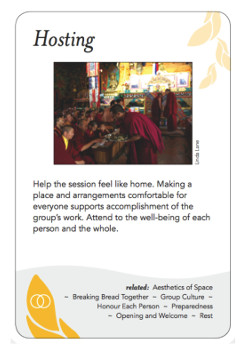 Recently, Janaia Donaldson and Robin Mallgren of Peak Moment TV, an online ‘channel’ of insightful video interviews with leading progressive, permaculture and post-collapse thinkers, interviewed me for the third time. Janaia and Robin had been staying at my house, so I got to know them well and learned to appreciate their consummate skill at interviewing, video production and editing. This time around, they interviewed me alongside fellow Bowen Islander Chris Corrigan on the subject of group process facilitation.

The first part of the interview explained The Art of Hosting, a training and collaboration program that explores and integrates a spectrum of facilitation methods, of which Chris is one of the acknowledged global leaders. The second part introduced the Group Works card deck, a facilitator’s “pattern language” that is now being used by over 2000 professionals around the world, published in 2011, which I am immensely proud to have been involved with as a co-author and co-producer.

Here’s the full 35-minute video of the interviews:

And here is a 10-minute edited version focused specifically on Group Works, that actually uses the cards, shown being “played” to a tableau, a visual ‘recording’ of patterns, by yours truly, to show which patterns were either invoked or discussed during the group process of our three-way conversation. We call this mapping of an event to the patterns invoked by it by using the cards “cardography”:

To learn more about the cards, or acquire a copy, please visit the Group Works site. And if you live in BC or Washington State and would like to attend a Vancouver workshop on improving group processes using the cards, to be held at the end of May, here’s your invitation!