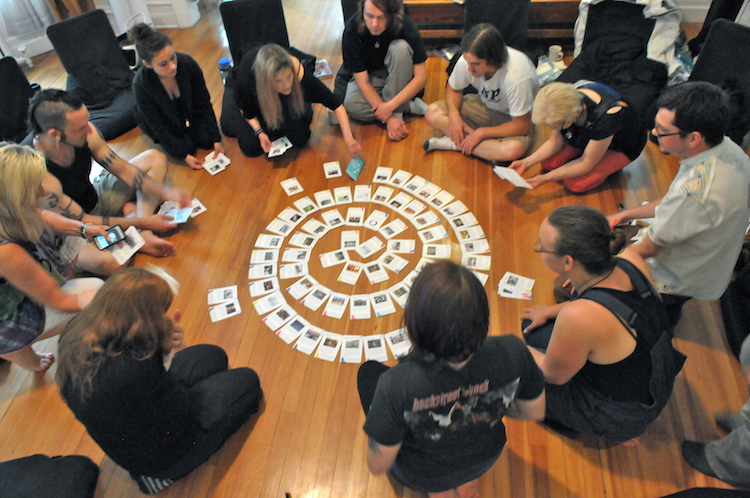 Last night I dreamed about a strange and wonderful ritual. The dream was set in my past and featured a group of about 15 close friends and family members at that time, who had gathered at someone’s house to celebrate something called “Co Day” (apparently referring to any or all of “community”, “colleagues” and “cohabitants”).

The highlight of “Co Day”, in the dream, was a ritual called an Appreciation Circle. We were sitting in a circle with candles around us and an array of cards, each depicting a positive attribute like compassion, patience, or green thumb, in front of us. Each of us took a turn being the honouree, starting with the youngest member there. Here’s how it went:

Anyone was free to decline to be honoured as their turn came up. At one point in my dream a family pet became the honouree (for steps 2-5 only)! At another point in the dream someone said they had two more Appreciation Circles to attend with different groups of friends, family and colleagues later that “Co Day”.

It was just a dream. But though I may have unwittingly embellished it in recalling it when I awoke, it seems to me that the idea of Appreciation Circles and a Co Day make a lot of sense. I’m not much of a fan of rituals, or of ‘official’ holidays, but I found this dream, and the ritual and holiday that unfolded in it, a strangely moving experience.

Maybe I’ll try it someday, when I’m next in a group of close Co’s.

image: visionary permaculture group using the Group Works  exemplary group practice pattern language cards — photo by Gene Stull; these are not the ‘positive attribute’ cards that appeared in my dream, but they would do in a pinch!