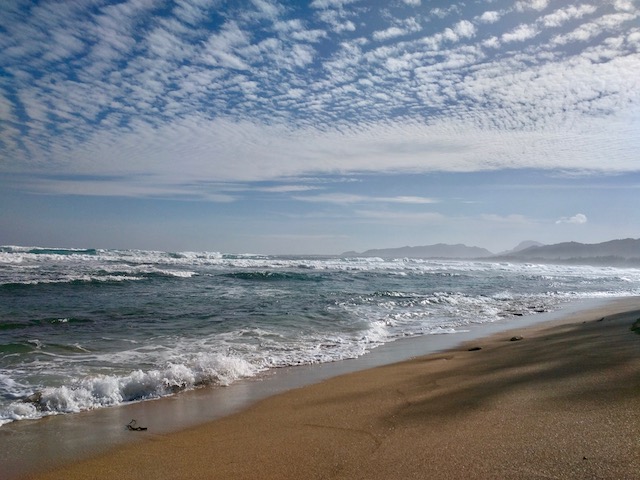 I thought about what you were saying last evening about the non-duality stuff, and about how hard it was to explain the whole thing about not really having free will, but seeming to, and after tossing it around in my head for a while I started drawing what the ‘self’ seemed to be and what ‘we’ are like without one. I decided to share my sketches with you; here’s the first one: 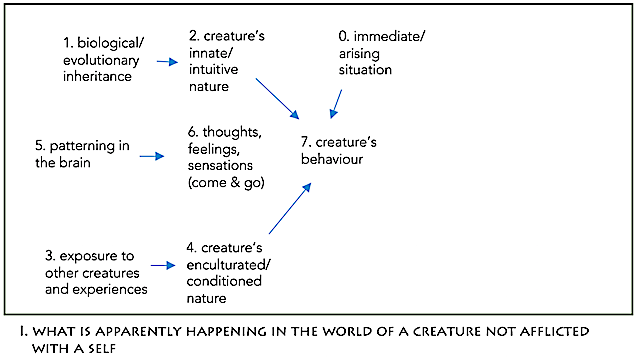 So here is the ‘natural’ apparent reality for a creature without a self — a wild creature, or a human child before the self emerges, or after it falls away. Say this creature faces a situation (0), like the apparent choice between eating two things. Its biology (1) may lead it (2) to instinctively prefer one of the things over the other. Its experiences or learnings from other creatures (3) may condition it (4) to prefer the other. There is some patterning in the brain (5) that may bring up some thoughts or feelings (6) about the two apparent ‘choices’, but ultimately the creature’s behaviour (7), apparently selecting one or the other (or both or neither), is a consequence of the creature’s nature (2 and 4) alone. The creature has no free will, no choice, no control over what happens. What happens is the eating of one thing rather than the other (or both, or neither).

Now here’s what apparently happens when a creature with a self is in the same situation: 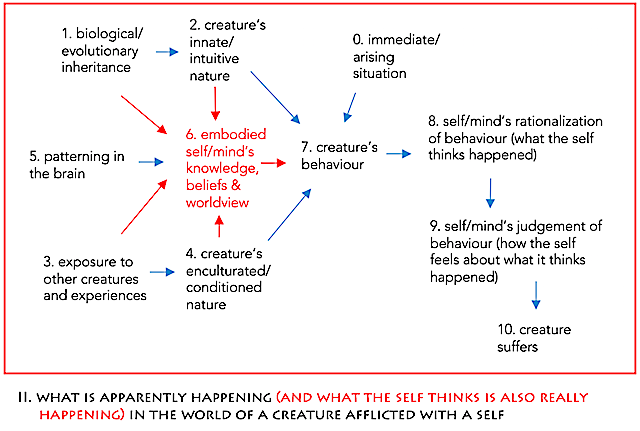 This creature faces the same situation of apparently choosing between two foods (0). Like with the unafflicted creature, its biology (1) may lead it (2) to prefer one of the things over the other. Its experiences or learnings from other creatures (3) may condition it (4) to prefer the other.

But at some point, what emerged ‘in’ this creature, possibly as an unintended consequence of us evolving large brains with excess capacity, was the embodied self/mind, the mental construction of the idea that this creature is apart from all-there-is, and this self came up with the idea (reinforced by others similarly afflicted with selves) that it had control over this creature’s actions, beliefs and decisions. So now instead of thoughts and feelings just arising and passing in this large brain, the ‘self’ was appropriating these thoughts and feelings as belonging to it (and to the creature), and reacting to them. The self is just brain-patterning on a larger, reflexive scale (5).

So now the self attempts (fruitlessly) to intervene in what is happening (6). It reasons that it, not the creature’s innate and conditioned nature, is actually making the decision ‘for’ that creature. When the creature moves to eat one of the two foods (or both, or neither) (7), the apparent decision is not actually made by the self at all — it’s still made as a result of the creature’s nature (2 and 4).

But the self has to take ownership of the decision (it’s been taught by other self-afflicted creatures that it is and must be ‘responsible’), so it rationalizes (8) the decision that has been made in such a way it can continue to believe it ‘made’ the decision. It reimagines what actually happened to conform to its central, controlling view of itself. And then, it second-guesses that decision (9), and congratulates or blames itself for that decision. Depending on the nature of the apparent decision (eg whether to give money to a homeless person), this can give rise to all kinds of guilt, shame, anger and sadness (10). And uncertainty over what might happen to the creature that the self wasn’t up to perfectly anticipating, preventing, and controlling, gives rise to chronic anxiety and fear (8,9, and 10 are what Eckhart Tolle calls the egoic mind/pain body vicious cycle).

All for no reason. The self has no control over any of it. What the creature does has nothing to do with the abstract, oversimplified model of reality that the self has concocted and attempts relentlessly to use to guide ‘its’ decisions. While the large brain enhances the creature’s capacity to intuit cleverly and to learn from its own and others’ experiences (a wonderful survival tool, and hence an evolutionary success), the self/mind (a disease that came along with the large brain) has been an evolutionary disaster, producing unimaginable suffering and destruction. It will soon suffer the end-state of all terrible evolutionary mistakes — extinction.

So it’s a tragic story. What seemed like such evolutionary genius (the large brain), is, because of the parasite that came along with it (the self), destroying our whole planet’s rich ecosystem of life.

I can see how you find all this infuriating — you seemingly have this knowledge about the true nature of reality that almost no one else can fathom (it is a pretty powerful delusion, this self), so people think you’re crazy or preoccupied with something unimportant when you should be doing something ‘useful’ (like paying attention to them and their selves’ issues).

And on top of that you know that the affliction of the self is incurable (though occasionally it goes into spontaneous remission), and that no practice makes the falling away of the self any more likely to occur.

But I still love you (aside from the fact you use the word ‘inflicted’ when you should be using ‘afflicted’). You’re almost as smart as me, and you have the handicap of being male.

As for the ‘realization’ beyond the intellectual understanding that your self is not really in charge of anything, and doesn’t really exist, when I see you stop worrying, I’ll know you finally got it.

Unrealistically yours in any case,