The Work That Seems Worth Doing Now 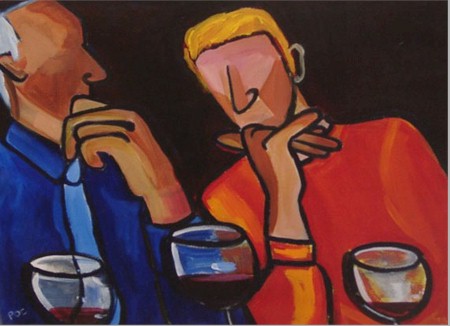 I had the pleasure of meeting Dougald and Paul a few years ago in Totnes, and then fell out of touch with both of them. I sensed they were being sucked back into useless debates about collapse (what was being said about it; what could or should be ‘done’ about it), and I was disappointed that what I’d read of the contents of their writing anthologies never approached the brilliance of their original Manifesto. But I still agree with the original Dark Mountain mandate: to simply chronicle civilization’s collapse, through whatever our media of choice may be, without prescribing what to do about it, since nothing can, or need, be done. It is enough to witness it, articulately and compassionately.

It is enough to point out what is so obvious few can see it, as Dougald does again in this essay, writing from Sweden about his co-venture called Home, which is “a gathering place and a learning community for those who are drawn to the work of re-growing a living culture”, and reminding us of Vinay Gupta’s observation that “What you people call collapse means living in the same conditions as the people who grow your coffee”.

Still, all collapsniks keep getting asked the same question What do we do now?, so I thought it was interesting that Dougald has seemingly learned to sidestep that answerless question by instead addressing the more sensible question What is the work that seems worth doing now?

Dougald, like me, has become intrigued by the Extinction Rebellion movement, which seems a much younger, more radical, more intent and less idealistic movement than the Occupy movement, somewhat more akin to the Idle No More movement. He admires their energy, their doggedness, their Direct Action work that dares to say no to a culture that no longer serves us, and predicts “there will be other movements along soon, other kinds of rupture and other kinds of work to be done”.

I’m not so sure. Dougald’s new venture of “re-growing a living culture” resonates with the mandate of Extinction Rebellion to co-create a “regenerative culture”, and that of the latest generation of food system activists to promote “regenerative agriculture”. Sustainability and resilience are dead, apparently; long live “regeneration”!

I find reading about these ‘new’ terms depressing: it’s all about “improvement”, “design”, and (etymologically) “making things over”. Whereas permaculture and complexity science teach us about observing and learning humbly from nature and adapting accordingly, “regeneration” (literally “being born again”) is about humans once again front and centre doing things a better way (than nature?) When will we ever learn?

I think part of the problem with sussing out the work that seems worth doing now is that anyone’s answer will be contingent upon their personal story of what has been, of where ‘we’ are now, and of what the future will hold. As I have argued before, stories are convenient fictions. They are what we want to believe, not what is true — no story can convey what’s really true. 45, who is now certain to be remembered in history as the most incompetent businessperson in the history of the planet, is a master story-teller, spinning tales that so many desperately want to believe to be true that it is now quite conceivable that this incoherent, clueless sociopath will actually be re-elected. How can we persuade ourselves, after looking at his example, that changing our world is as absurdly simple as “changing our story”? Damn stories.

Dougald’s answer of “negotiating the surrender of our whole way of living” is likewise laden with his story, one that many affluent progressives obviously sympathize with and relate to. It’s a poetic and lovely statement, one I wish I’d come up with. But what does it mean? To what or whom are we surrendering exactly? What does it mean to surrender when you only do it when you have no other choice?

And given the chasm between ‘our’ way of living and our coffee grower’s, is it just us, the mostly northern and western beneficiaries of this obscene and destructive culture, who should be surrendering our way of living? Most of the world’s people would love to surrender their way of living, if there only were one on offer that was easier to cope with than the precarious way they’re living now.

So, I sense that, while the new question What is the work that seems worth doing now? is at least more honest and useful than the old question What do we do now?, my answer to both questions remains the same: There is nothing to be done. What we do each moment, in the deluded belief we have some personal choice about it, is the consequence of our conditioning and the circumstances of the moment, and it’s beyond our control.

I could spend hours talking with Dougald — he’s a brilliant, imaginative, and unusually articulate guy. But I wouldn’t be interested in talking about regeneration, or about surrender, even if we could agree on what those hubris-laden terms actually mean.

What I’d rather talk about, I think, is how we might hone our capacity for paying attention, which I think underlies all great art, as unbearable as paying attention in a world in collapse can often be. I’d rather talk about how we might foster an attitude of “contemplative gratitude” — reflection, acceptance, compassion, kindness and equanimity — that might enable us to be of more use to others in these challenging times, and might allow the great ‘works’ of art that are waiting for us to get out of the way so they can be expressed through us, to emerge.

And I’d rather talk about what JA Baker in The Peregrine might have been getting at when he said, after spending a lifetime trying to see the world as a falcon saw it, “The hardest thing of all is to see what is really there.”

There would be no plan of action, no ‘work plan’. Just a conversation. Fun, actually. Play, not work at all. Play, perhaps, that seems worth doing now.

5 Responses to The Work That Seems Worth Doing Now