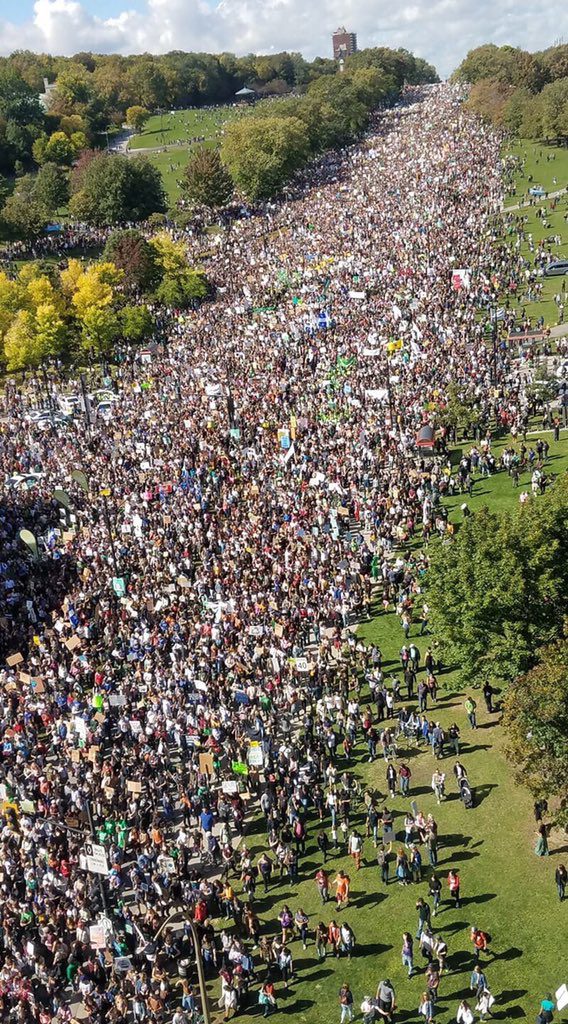 some of the half-million Montréalers who participated in yesterday’s climate march; from Greta’s twitter posts

One of the things that intrigues me about XR is that their three demands are simple, measurable and revolutionary:

The actions of XR are all about government action, because XR believes (a) that many people already know there’s a climate emergency, and those that don’t will eventually be persuaded by rapidly-occurring changes, so it’s government that has to change, not public will, (b) meeting demand 2 will dictate unbelievably rapid and radical policy changes and actions in every area of government, so no other stand-alone actions, like emission quotas, ludicrous cap-and-trade schemes, and conservation regulations will be necessary, and (c) the Citizens’ Assembly, properly constituted and empowered, lets elected officials ‘off the hook’ for the very unpopular decisions they will need to make to meet demand 2 (they can say ‘the Citizens’ Assembly forced us to do it’, much as they now blame courts and others for things they do reluctantly).

What’s more, the clever wording and structuring of these ‘simple’ demands essentially recognize the truth of what I have been calling for the past 10 years (because they seem to hold up so well as more and more evidence comes to light), Pollard’s Laws. I thought it would be useful to explain how these laws apply and how XR so brilliantly recognizes and taps into them. So here they are:

Pollard’s Law of Human Behaviour: Humans have evolved to do what’s personally urgent for them (the unavoidable imperatives of the moment), then to do what’s easy, and then to do what’s fun. There is never time left for things that are seen as merely important. Social, political and economic change happens only when the old generation dies and a new generation with different entrained beliefs and imperatives fills the power vacuum. We have evolved to be a collaborative and caring species, and we are all doing our best — we cannot do otherwise.

Until XR, Greta and others who acknowledged the existential peril of climate catastrophe came to public attention, most polls indicated that the majority of people in most countries with decent education systems and information systems, believed a climate catastrophe was a real possibility, but conceded they were unwilling to change their lifestyle to address it — other priorities were considered more important and more urgent. That has changed very quickly; recent polls (and the Swiss gnomes who rate the world’s greatest risks) have quite suddenly acknowledged the climate catastrophe as our most urgent priority. If taken to heart, that moves the issue from the #4  category (merely important) to the #1 category, which has huge ramifications for governments and public policy.

This is particularly notable because grappling with this predicament is the opposite of easy, and the opposite of fun. (Neither are the climate marches a picnic.) It remains to be seen whether the shift will continue to gain momentum or fizzle out, but the odds of the former are increasing.

This movement (perhaps like the anti-war movement of the 60s) is a youth-driven phenomenon, and its elder leaders (like Roger Hallam, who’s much like Gene McCarthy in the 60s ) draw all their energy from the young. If the young show up in significant numbers, not only in the streets but at the polls and in the legislatures, they could dramatically change party platforms, election results and key vote outcomes, especially if XR stays true to its policy of relentless but non-violent disruption, so they can’t just be ignored.

When I meet conservatives now, it is obvious that most of them are realizing that they cannot possibly look young people in the face, including their own children, and baldly deny that their actions and inactions are accelerating climate catastrophe and imperilling their and other children’s futures. Just as radicals were ostracized in the ’50s and change resisters were likewise running for cover in the ’60s, it may be that for the rest of this decade, at least, global polluters and the politicians that pander to them will be excluded and shamed. That will be, perhaps, their final legacy, and their arguments that they didn’t know any better will carry no weight, least of all to their children.

If this shift can continue (and it may not, as we learned from the progressive movements of the 60s), we may see something of a quiet revolution, as the old step aside and, at least, say “OK, here are the reins of power, see if you can do any better.”

This mindset is clearly evident in the actions of Canada’s tarnished try-to-please-everyone pseudo-progressive PM Trudeau, who marched, heckled much of the way, in yesterday’s Montréal climate strike march, along with 400,000 others, led by Greta Thunberg. He met with her, and she told him, as she’s told other world leaders, that he’s not doing nearly enough. Perhaps it’s the idealist in me, but I think he marched not because it was politically expedient (his principal rival, in the current polls at least, the arch-conservative Andrew Scheer, whose do-nothing climate plan has justifiably been dismissed as “obscene”, was a no-show), but rather because he knows that climate catastrophe has arrived, and that he in fact has done much less than “not nearly enough”. He marched, of course, with his children. Could he have not?

We are all doing our best, and despite the enormous inertia in our political, social and economic systems, and despite the staggering cost that mega-polluters, foot-draggers, denialists and self-righteous 1%ers will have to face if they lose this battle (many of their corporations, to meet demand #2, will be quickly rendered worthless and wiped out), and despite the 1%’s massive economic and political clout, it is not inconceivable that power and law could radically shift, and the next few decades become a universal all-hands-on global battle to mitigate centuries of destruction. In some places, there was such a shift (including 90% personal and corporate tax rates) in the 1930s, when the urgency of ending the Great Depression at any cost became undeniable even to those buffered from it.

I think it’s too late, and that, even with enormous and coordinated political will, system change cannot happen nearly fast enough to prevent climate collapse (and economic collapse) bringing down industrial civilization in this century. But I’m stoked to see us try. Already, over 1,000 political jurisdictions have met the first part of demand #1.

My pessimism in the face of such a possible major shift in collective will has little to do with human nature and much to do with how change happens in complex systems — including ecosystems and social systems. That’s the subject of my second ‘law’:

Pollard’s Law of Complexity: Things are the way they are for a reason. To change something, it helps to know that reason. If that reason is complex (and it frequently is), success at truly understanding and changing it is unlikely, and developing workarounds and adapting to it is probably a better strategy. Complex systems evolve to self-sustain and resist reform until they finally collapse. For that reason, the systems of global industrial civilization culture are now collapsing rapidly and inevitably, producing the sixth great extinction of life on Earth.

Civilizations that collapsed in the past certainly saw the writing on the wall, as any student of Jared Diamond or Ronald Wright can tell you. It’s not that many caught up in them didn’t want to reform them or change them or overthrow them in favour of more sustainable societies, it’s that they couldn’t.

In nature, everything is connected, and there are a trillion moving parts that evolve to keep the system in balance. Sometimes, the system gets so unbalanced that these balancing mechanisms can’t right it. When this happens, it collapses. It’s called overshoot, and in some species (mosquitos for example) it’s endemic — endless cycles of boom and bust (collapse). But nature has evolved to prevent these extremes happening in species that are essential to ecological balance, including, until recently, our own. Many larger creatures, for example, somehow self-regulate their fertility rates so that, even in the absence of many predators, their population remains in check.

Ours did the same, for a million years or so. Until the advent of civilization and its technologies (agriculture, settlement, language etc), human women almost never had children more frequently than once every four years (breast-feeding is nature’s premier contraceptive). This meant that lugging the babies around until they could walk wasn’t an ordeal for nomadic pre-civ cultures; there’d only be one per family at a time. This is the kind of elegant balance a billion years of evolution enables, as long as there is a connection, a recognition of the a-part-hood and inter-dependence of all life on Earth. We lost this with the dawn of civilized, un-natural cultures, and now, like plagues of locusts, we have quickly desolated the world we live in, and at such a scale that we’ve wrought the sixth great extinction.

I’d love to believe we could change this now, but everything I’ve learned convinces me it’s preposterous to believe so, and our only avenue now is to relearn to adapt to sudden (a generation or two) and ongoing massive ecological change. That means relearning how to live in community, and relearning the skills needed to survive in low-tech, relocalized, massively migratory and highly-collaborative societies (which includes a ton of ‘soft’ skills like consensus-building along with the technical skills like mending clothes and growing food, and does not include ‘skills’ like hoarding and killing).

That we will do, or at least try, because, as Pollard’s first law says, we will have no other choice. It will be an interesting next millennium or two, as nature struggles to restore the balance, as it did when a meteorite caused the fifth great extinction, and as we rediscover, to our astonishment, that in this struggle we are all on the same side.

I’ve done quite a few things in my life that inspired and excited me, even though I knew in my heart they would not succeed, or, if they did, their effect would not last. That’s Pollard’s first law playing out in me. I can’t not do what I do, no matter what my instincts or my heart tell me. Like everyone, I’m doing my best, and I’ll be damned if knowing its futility will get in my way.

1 Response to Pollard’s Laws and XR