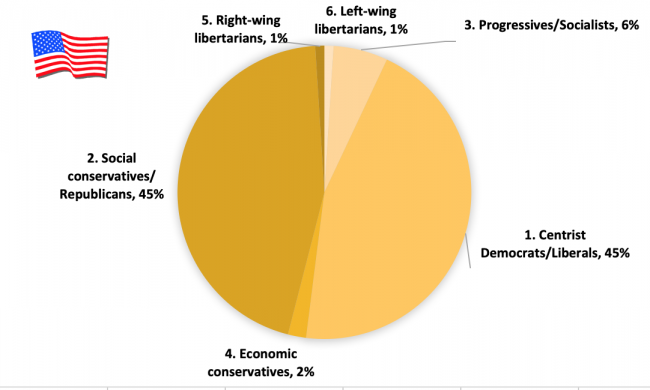 I was not surprised that the coronation of Biden went off peacefully. It was pretty clear that the gang of overpaid Trump PR people who orchestrated 98% of what happened in DC earlier this month concluded that, thanks to the 2% who stormed the Capitol and got all the headlines, it was a total PR disaster.

The Jan 6 event involved millions of dollars in promoting a protest, complete with massive stages with expensive Jumbotron TVs and even a US-Open-style Executive Tent for the Trump family and friends. And it backfired. They should have known: In progressive protests it’s never the large numbers who march peacefully that get the media attention; it’s the tiny Black Bloc type minority smashing windows and looting. Why should it be any different when conservatives protest?

After that PR disaster, the Trump PR corps just gave up, and the result was the small handfuls of protesters we’ve seen over the past few days, far more militant in their beliefs but completely disorganized, unfunded and unrepresentative of anyone but their own tiny membership.

Some recent articles, I think, drive home where America now sits, and here’s where I think that is:

This delicate balance, which I’ve tried to depict in the chart above, has been in place for nearly four decades. Some thoughts on how the balance has shifted over the years: 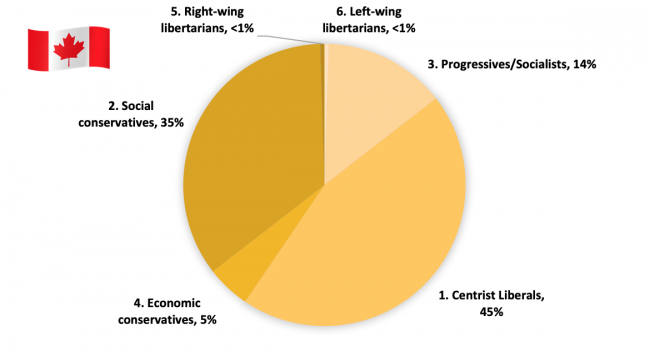 In Canada, because groups 2, 4 and 6 combined are less than 50%, they have to rely on the “first-past-the-post” system of elections that has allowed them to win close to 40% of multi-party elections over the past 4 decades with only 40% of the votes, because the centrist and progressive parties split their 60% of the votes among 3-5 different parties. My sense is that the political landscape in much of Europe and other anglophone countries is not dissimilar to Canada’s.

So I’m not terribly worried about the loss of democracy, though I agree with Adam Gopnik that we can never give up trying to make it work better, and should never assume it will last forever. (Groups 5 & 6, tiny as they are, are large enough to create havoc, especially with warfare — both military and political — becoming increasingly asymmetric).

The rally on Jan 6 supposedly attracted an estimated 25,000 people, of which about 98% were probably from group 2 (clueless, unarmed, protest “tourists” who reacted to Trump’s people’s herculean PR campaign to show up for the rally and party even though they never got invited into the tent). That’s a really poor return on the massive publicity investment — after all, Greta Thunberg attracted 20 times that number to Montréal for her climate march with much less spending. Though of course, ultimately neither event made any difference.

The media didn’t even show much of the action with the giant stages, speeches, Jumbotron displays or the Trump tent — it was more fun (and better for their ratings) to show the guy sprawled in Nancy Pelosi’s office or the antler-head playing to the cameras in the Senate chamber. Instead, some of them showed the tent video after the fact as if the attendees were celebrating the invasion of the Capitol, although the tent was only occupied during the rally where Trump had spoken two hours earlier, and then the family left for the private dining room in the Oval Office well before the ‘invasion’ of the Capitol began. But, gotta keep those ratings up.

I think the far greater problem is that, due to the above-noted distortions in the electoral systems, conservatives are justifiably worried that if the system isn’t somehow constantly rigged in their favour, they’ll never hold power. And they’re absolutely correct. So there’s a lot to be gained for conservatives in both the US and Canada to fire up “their” group 2 & 4 voters through fear-mongering.

And then, of course, there’s a lot to be gained by the centrist parties (US Democrats, Canada’s Liberals) to fear-monger that since the system is rigged, they may never hold power, so they have to turn out in extraordinary numbers (and not split the vote) to prevent the minority from always winning. And they’re absolutely correct.

It’s a completely fucked-up system. But to me, the real outrage remains the one that the media never talk about: the total control that the corporatists, who finance all the major parties in both countries, and who own the media, have over the levers of power and policy, no matter which party wins.

And we have both governments paying lip service to addressing climate change while doing nothing of substance to even slow it down. (And don’t say the Democrats just need time — they had time under Clinton and Obama and did nothing.)

Unlike authoritarian overthrow, which is a small but real risk, these outrages are happening, here and now, and the parties and the media are all complicit, conning us all. Nero would be proud.

Just in case you’re new to reading this blog — this situation cannot be fixed. This is what political, social, economic and ecological systems in collapse look like. Everyone in power knows that no one can prevent these collapses from happening, and all they’re doing is posturing, offering false reassurances (to keep people obedient, prevent widespread panic, and tamp down the numbers of the nothing-to-losers in groups 5 & 6), trying to prop it all up a little longer, and making sure they have their own personal escape and insurance plans in place. And perhaps trying to buy into their own rhetoric, to make it all seem less hopeless.

I learned a lot over the past 20 years talking candidly with climate scientists (and a few economists), with the cameras off and no media in earshot. They’ve known we’re fucked for a long time, but they dare not say so publicly, and in some ways, they don’t even dare admit it to themselves. It doesn’t matter which of the six groups you’re in — none of the forms of salvation their leaders promise has a hope of working. Might as well talk and play with the deck chairs, because on this voyage on Spaceship Earth, there are no lifeboats.

5 Responses to Not So Extreme