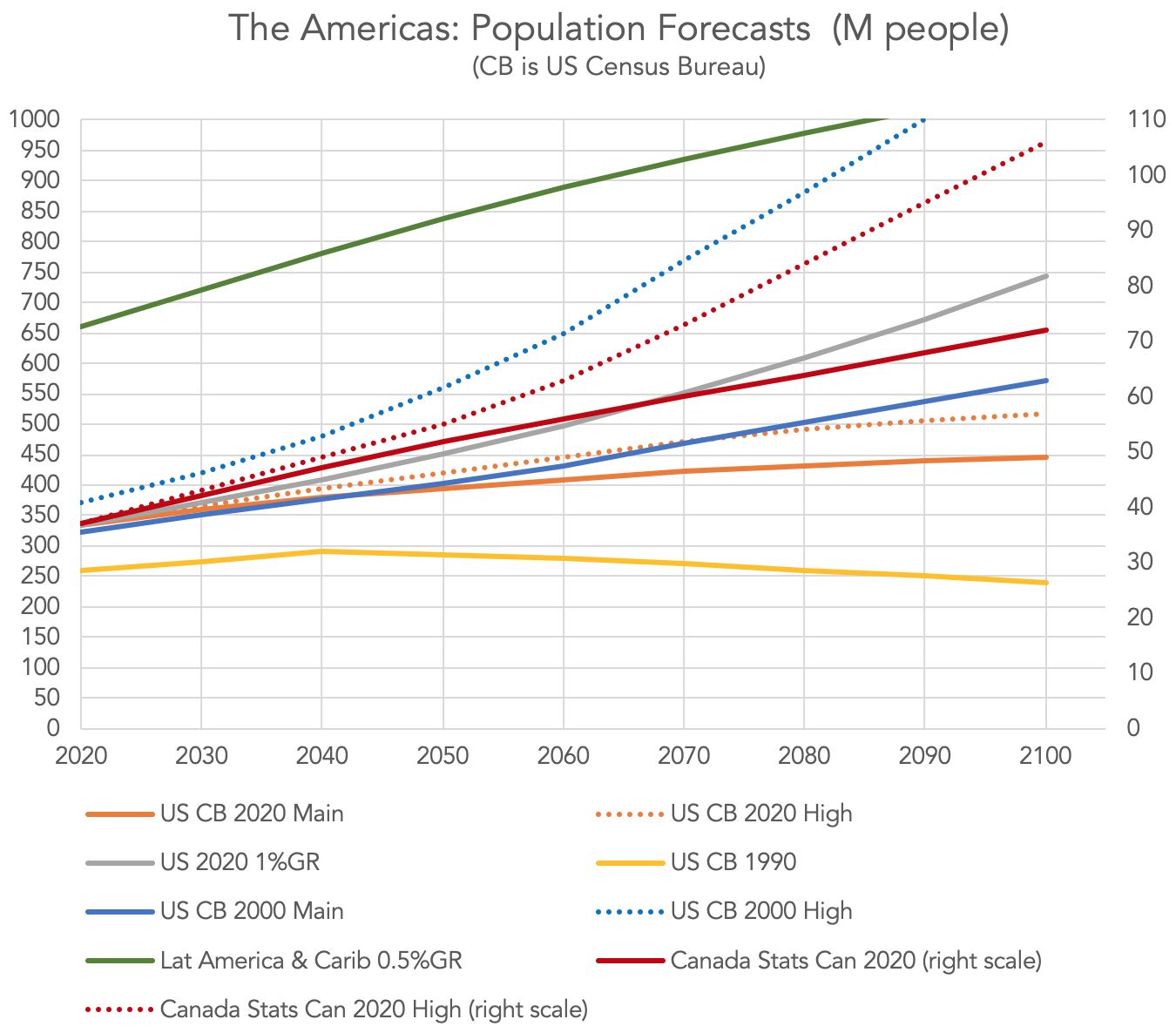 Pity the poor futurists, especially those who make population forecasts. Nothing like seeing your colossal mistakes saved in internet amber for all time, attracting the derision of those with 20-20 hindsight.

In 1990 (that’s just 30 years ago), the US Census Bureau gleefully forecast that in its “best estimate”, the US population would peak at 295 million in the year 2040, and would thereafter decline. Of course, the actual US population soared past that mark just 15 years later (even ignoring the uncounted), and shows no signs of decline in this century, even according to “low estimates”.

So in 2000, presumably aghast at how they could be so wrong, they actually looked at how migration was shaping population everywhere. By that time, next door in Canada, the entire increase in population each year was now attributable to net immigration. And, thanks to a slightly more humane immigration and refugee policy here than south of the border, Canada was admitting twice the proportion of new Canadians each year as a percentage of its population. The Canadian forecasts were likewise constantly and dramatically underestimating population increases because they assumed that people in the country on “temporary” work and student visas would go back home within a year. But the large majority of those people actually just keep re-applying for “temporary” visas until they get approved for permanent residency. Who could blame them? In many cases, they would do almost anything to avoid having to return to the ghastly, impoverished, dangerous and hopeless situation in their home country.

I am sure you are tired of my repeating this but I’m afraid I must: No one is to blame for this situation. We have desolated the planet exactly as our population and wasteful use of resources have both risen to several times our planet’s capacity to accommodate them. Poorer nations have had much of their wealth and resources stolen from them, mostly by colonial occupiers and international corporations, and saddled with unrepayable debt loads. Their countries, many of them, are environmentally ruined by pollution and reckless development, depleted of soils, minerals, trees and water.

The new president of El Salvador has courageously apologized to his people and the world for the fact his people have no choice but to make the harrowing and often deadly journey to try to reach a country that is not ruined beyond repair. His people, and those of a hundred other nations, are the first wave of what could be as many as two billion climate refugees, people whose only remaining choice is and will be to try to sneak into a safer, less destroyed nation, with their families and essential possessions, or die in the attempt.

But someone, it seems, didn’t tell the population forecasters. Or else, perhaps, the population forecasters didn’t want to ruffle the feathers of the politicians or the citizens. For whatever reason, they continue to hugely underestimate the impact of immigration, and desperation, on populations around the world. The economies and ecologies of much of Latin America, Africa and Asia are already collapsing. Where do the forecasters think they’re going to go?

It is interesting that some of the forecasters in struggling and impoverished nations are now forecasting that their populations will cease their steep increase, for two reasons. One reason is that they hope and believe that as women gain education and power in more and more human societies, they will choose to have smaller families, and their choice will be respected. But a larger part of their slower-growth forecast is the presumption that millions will leave their country for other, more affluent nations. But the forecasters in those affluent nations haven’t assumed that that massive exodus will come to their country.

Except, curiously, for the US Census Bureau forecasters in 2000. After their 1990 forecast proved catastrophically wrong, they changed their model, and in 2000 seemed to have incorporated an expectation for a continually growing number of immigrants and permanent residents into their estimates. So in 1990 they’d forecast US population to be level at 290 million in 2050 and fall to 245 million by 2100 (yellow line in chart above) — note that it’s currently 335 million and growing at just under 1%/year. But in 2000 their new “best” forecast was for US population to rise to 400 million by 2050 and 570 million by 2100 (solid blue line). And their “high” forecast said it was possible that the population could rise to 560 million by 2050 and 1.2 billion by 2100 (dotted blue line).

Clearly, their bosses weren’t happy with these numbers. The majority of Americans of both the Tweedledum and Tweedledee parties want immigration reduced, not ramped up to deal with the escalating humanitarian crisis. So last year, the forecasts went back to head-in-the-sand, falling immigration models, forecasting just 390 million Americans by 2050 and 450 million by 2100 (orange line).

In comparison, Canadian forecasters have been slightly less naive (or less in denial). Their short-term forecasts continue to be absurdly low — Canada’s population is growing at nearly 2% per year, almost all of which is net immigration, much of which is logged as “temporary”, and no amount of assuming that millions of “temporary” residents will soon pack up and return home, so their numbers will stabilize, can disguise that. But Statistics Canada is more sanguine about the longer-term projection, which is that Canada’s population could essentially double from its current 38 million to just over 70 million by 2100 (red line, right scale, drawn to scale vs US — contrast the slope of the red lines to the blue, orange and yellow lines). Or even triple to over 100 million by 2100 under the “high” forecast (red dotted line).

If you look at the current refugee crisis at the US southern border, or the huge backlog of Central Americans trying to get into Canada, you can see the early signs of a brewing catastrophe that no one wants to talk about. There are only two ways out: Bullets or opening the doors. Latin America already has far more people than it can support, perhaps twice as many as it can sustainably support, and their numbers are growing, despite lower birth rates. Most of its nations are hopelessly in debt, their resources almost entirely depleted, and the ravages of climate change just starting to take their toll. My estimate is that, before our global economic and ecological systems have completely collapsed at the end of this century, at least 300 million Latin Americans will have no choice but to flee, and they have nowhere to go but north, to the US and Canada.

If the US chooses bullets as the answer, to protect their own “homeland” as its economy and ecological systems also teeter and fall in the coming decades, it will be the bloodiest border war in the history of the planet. And for all their blather about walls, it’s a war they might well lose. And there will be similar wars on Europe’s borders, and possibly in the Far East as well.

And if the US chooses, uncharacteristically, to yield to the inevitable flood and open their borders to anyone who wants to come, it will create a strange and tense new world to a nation that has of late shown great reticence to change anything (they still haven’t adopted the metric system). I think it would, or will, be fascinating — every aspect of life will have to shift to cope with this “invasion”.

It is probably worth studying other places which have faced a complete social transformation because of overwhelming numbers of people flooding across their borders in a short time, both in the distant past and more recently. The rubbing together of cultures has always had a kind of magical (not just abrasive) impact on everyone caught up in it, as each learns new things from the other.

Conservatives are not going to be happy. And I suspect a lot of self-described progressives are going to struggle to hold to their values (and overcome their denial about the magnitude of the crisis) with so much in turmoil. CoVid-19 will pale by comparison.