Notes From the Rising Dark, Pt 1 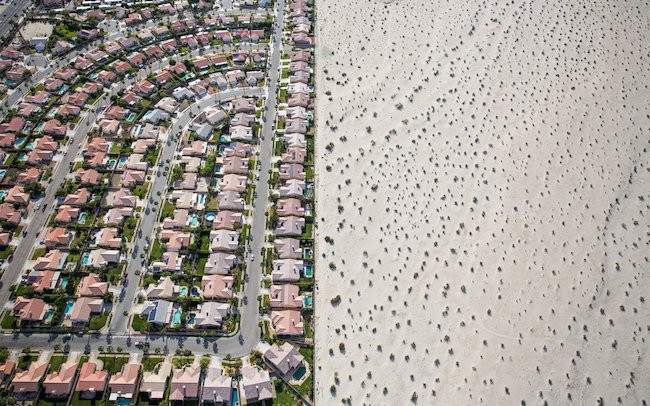 subdivision in Cathedral City CA; aerial photo by Damon Winter in the NYT

An Imagined Letter from COVID-19 to Humans (by Kristin Flyntz)

Stop. Just stop. It is no longer a request. It is a mandate. We will help you. We will bring the supersonic, high-speed merry-go-round to a halt. We will stop the planes, the trains, the schools, the malls, the meetings, the frenetic, hurried rush of illusions and “obligations” that keep you from hearing our single and shared beating heart, the way we breathe together, in unison. Our obligation is to each other, as it has always been, even if, even though, you have forgotten.

We will interrupt this broadcast, the endless cacophonous broadcast of divisions and distractions, to bring you this long-breaking news: We are not well. None of us; all of us are suffering. Last year, the firestorms that scorched the lungs of the earth did not give you pause. Nor the typhoons in Africa, China, Japan. Nor the fevered climates in Japan and India. You have not been listening.

Stop. Just stop. Be still. Listen. Ask us what we might teach you about illness and healing, about what might be required so that all may be well. We will help you, if you listen.

The restrictions under CoVid-19 have again raised issues about what legitimate authority the government (supposedly comprised of people elected to represent our collective best interest) has to overrule what many consider their personal rights and freedoms.

It’s always a balancing act, and especially so when there is no reasonable compromise between the best interests of the collective and that of private individuals, or between private individuals. Our Canadian government has prided itself on being a government of compromise, so it’s not surprising that on issues like pandemic mandates, feminism vs trans rights, and the right to die, their waffling and half measures have understandably pissed off both sides and ended up doing a great deal of harm in the process. You just can’t “both sides”, or strike a middle position, on every issue.

A major dilemma many of us are now facing, or will soon face, is when to stop adhering to mandated or “recommended” pandemic limitations (on masks, indoor activities, travel etc) once we have personally been inoculated. As has been happening throughout the past 14 months, we have all been effectively lobbying our governments, through statements and letters and up/down-voting, to impose more, or fewer, restrictions. Governments, particularly those of the gutless variety, try to walk that line (unless their lawyers advise otherwise), and will continue to do so, even though a more radical Go For Zero strategy would have been, and still would be, in everyone’s best interests.

Everything we do with others, one-on-one and in groups, is a negotiation, an agreement. That is the nature of social, political, economic and cultural relationships. These agreements are constantly in shift, being renegotiated overtly (“asking permission”) or tacitly (“begging forgiveness”). They recognize the realities of different interests, individual and collective, and also reflect the balance of power, authority and responsibility.

Isabel Wilkerson’s book Caste lays out how our societies, and our tacitly and explicitly negotiated relationships, align with the implicit castes to which we each belong. These caste distinctions are subtle and complex, and hence so are the agreements that exist within and between castes. We judge quickly and perhaps subconsciously what caste we believe others belong to.  You’ve probably heard stories where someone who’s being discriminated against or patronized, turns out to be a renowned celebrity, or someone of a different caste entirely, and the embarrassment, confusion and rationalization that follow. We don’t like having our unstated prejudices called to account.

Our caste assessments, and power dynamics in different situations, have evolved over a million years, and anthropologists tend to believe they did so primarily as a shorthand (to save us time making decisions) and as a means to discharge tension between us (“we disagree, but that ape is higher in the hierarchy than me, so I will defer to its judgment”).

There’s some evidence that before the modern industrial era, the legitimacy of hierarchy, rank and power was rarely challenged. And when it was, the challenge usually came not from the most oppressed caste, but from an educated middle class caste.

Because hierarchy in highly stressed environments can give rise to narcissism, displays of violence, and resultant trauma (remember Robert Sapolsky’s baboons), much of human history has been replete with abuse of power, and a propensity for “might makes right” thinking. It is seemingly only very recently that there has been any serious thinking about the entire notion of the fairness and equity of power. Along with this has been a cynicism about how power corrupts and therefore skepticism about whether governments and other “powerful” forces will ever have the interests of the collective, or the interests of individuals who are marginalized or oppressed, in mind when they make decisions. Even some socialists are increasingly skeptical, and want power decentralized, the opposite of the neoliberal globalization that has permeated our economies, politics and cultures for the past century at least.

The particular crisis we face right now is that everything is changing so fast, and being reassessed and challenged so profoundly, that our well-established, slow-to-change belief systems are unable to cope with the siege. This is perhaps symptomatic of any culture in its death throes. Consider how our “old stories” are dying, without compelling new ones to replace them: The myth of perpetual (if sometimes punctuated) progress is dying. The belief in the “American Dream” (that anyone can do anything if they set their mind to it) has been shown to be a lie. Our belief in democracy, in the idea of absolute moral rights and wrongs, in the idea that the collective interest outweighs that of the individual, and in the bizarre and extreme form of capitalism we have come to worship (as well as all the other -isms, especially humanism) has been rocked to the core by evidence of their abject failure. And it’s not only that these ideas and systems aren’t working now, but that they never really did. We just really badly wanted them to.

What can we believe when every belief we’ve ever had is in doubt, or no longer credible at all? How do we re-create a viable worldview when all its frames and beliefs are in tatters? What happens to a world that, having lost faith in everything it once believed, now chooses to believe only what it wants to believe, and facts and evidence be damned — since that at least helps us cope, and hope?

There have been “existential earthquakes” before in our history — notably during the regimes of Hitler, Mao and Stalin, and during our gravest pandemics and deepest depressions. But, nearly always before, there was a better future to believe in, even against all odds, and to work towards. What can we believe as we come to realize there is no future for our civilization, and no way to salvage one?

We can say we like to “challenge everything”, but there always remains some set of beliefs, some worldview, that we hold above challenge. For an increasing number of us, that stance is no longer tenable. We have seen the folly of our ways, and of the beliefs that underlay them.

And so we return to how we make decisions on what to do and how to be, when there is no bedrock of consistent, credible worldviews, hopes or beliefs on which to build them. If our civilization is ending and there is no imaginable future for our societies, why should we, for example, be fair about sharing vaccines with the poor and weak nations of the world? Like rats in an overcrowded cage, as the social fabric breaks down, each of us is left to look out for ourselves. It’s a time of unprecedented chaos, and it may take millennia before it settles out.

Is it still possible to have a worldview and a tentative belief system, one agile enough to adapt to constant revision and review?  My concern is that few of us will have the luxury time, health, skill and capacity to develop this agility, this “anti-fragility“,  in a way that will serve us acceptably well as collapse deepens.

No matter what, we will do, each of us, what we have been conditioned to do, including doing a lot of things that probably no longer serve us well either individually or collectively. This is what system collapse looks like. It has taken us a million years of evolution to plod to where we, the last generations of a brief, failed, global human experiment, are now, and there is no deus ex machina that will evolve us to where we’d have to be to endure this blink-of-an-eye catastrophic final human century in any “sensible” way.

All around us, creatures that have existed for millions and billions of years are going extinct, unable to adapt to the staggering transformation, desolation of ecosystems, and resultant accelerating climate collapse of the past two short centuries.

If we humans are to avoid extinction ourselves, it won’t be because of our ingenuity, our abstracting brains, or our technology. As Kristin’s poem at the top of this post reminds us, We are not well. If climate and civilizational collapse are like CoVid-19 writ large, we humans, stripped of our erroneous and fervent beliefs, our future, and our ancient knowledge of how to survive in a non-prosthetic world, are like the CoVid-19 patients in ICUs on life support. We might have avoided this situation, if only we’d acted sooner, if only we’d known. Our healing, and the planet’s, are now beyond our control. It’s up to the gods now.

3 Responses to Notes From the Rising Dark, Pt 1