Gaslit at Every Turn 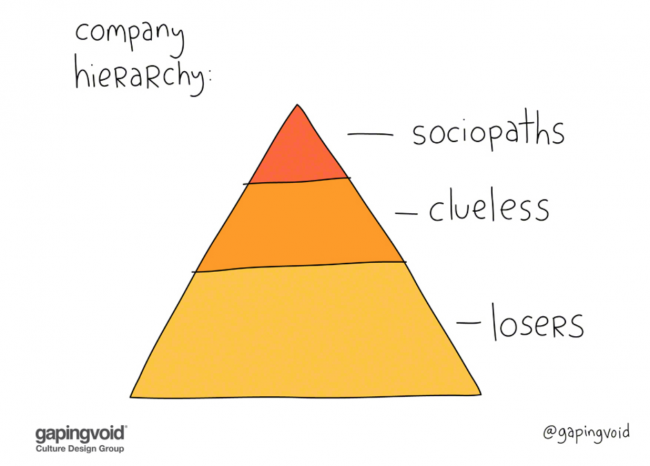 from GapingVoid.com by Hugh Macleod   In his comment on this cartoon, Venkatesh Rao wrote: “Organizations don’t suffer pathologies; they are intrinsically pathological constructs. Sociopaths, in their own best interests, knowingly promote over-performing losers into middle-management, groom under-performing losers into sociopaths, and leave the average bare-minimum-effort losers to fend for themselves.”

This week two of my favourite journalists, Zeynep Tüfekçi (writing about missteps in managing CoVid-19) and Caitlin Johnstone (writing about the media’s endless parroting of pro-war military-industrial complex propaganda and talking points) have both been riffing on the subject of gaslighting. The more I think about and witness this behaviour, the more I begin to see it as the definitive pathological behaviour of a civilization in collapse.

A key part of it is denial of wrongdoing or of a problem, on the part of the gaslighter, but accompanying that is misinformation or disinformation designed to provoke doubt (in others) that that denial is misplaced or simply wrong. So for example:

These are all forms of deeply mentally disturbed behaviour — sociopathy. And it’s behaviour that our modern culture has incited, tolerated, encouraged, reinforced and even rewarded. The biggest (and possibly most heartless) business failure in the entire history of human civilization was rewarded by being elected (and almost re-elected) president.

Let me reiterate, at the risk of being really annoying, that I don’t think anyone is to blame for this state of affairs. We do what we are genetically and culturally conditioned to do, and this has been the result. Georgia’s voter-suppressers will go on denying they’re racists. Biden will go on denying, as Obama did, that he is commander-in-chief of the most murderous government by far of this century, and is dangerously escalating the threats and violence on many fronts. Misogynist professors will keep on attracting adoring crowds of mentally disturbed young male incels while insisting their arguments are all about freedom of speech. This is what they’ve been conditioned to do.

We can become more aware of it, but we’re not going to change it. You can’t open up the minds of 7.8B people who are not well, and pour some magical healing salve on each of them, and end sociopathy. No one has that power, and the ones with the most power are the sociopaths.

And we are all sociopathic, even those of us who have been merely clueless all of our lives (doing our best “within the system”, like me), or the losers (as Hugh points out, he means ‘loser’ in the sense of having lost out on power, wealth, and opportunity their whole lives, and is not saying they’re stupid; in fact they may be smart for keeping their heads down and just doing what they’re told, without thinking too much).

The clueless and the losers are merely an order of magnitude less sociopathic than the real sociopaths who, according to their nature, have clawed their way to the top (or been anointed by their sociopathic parents or ‘leaders’), and who are responsible for a disproportionate amount of the atrocities and damage that is rapidly collapsing our civilization.

But we had no choice in the matter. We are all doing our best.

So how did this come about? Well, let’s take a look at the prototypical narcissistic sociopath, be s/he organizational leader or just garden-variety big-fish-little-pond abuser. One source says they probably have developed these personality traits:

If this sounds like someone you know, it’s probably because, to some extent or other, these are the hallmarks of what I’ve called Civilization Disease (what Deena Metzger calls Extinction Illness), that afflicts us all. We are not well. You have to be crazy to survive in this culture.

Here’s a chart showing what gaslighters do, for example, to deny, refute and undermine policies and programs based on actual science: 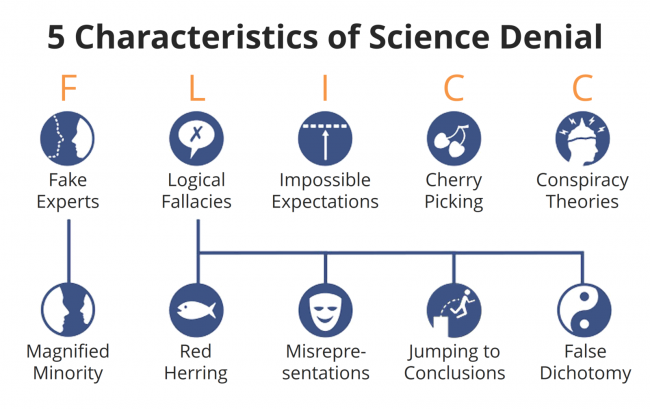 Zeynep’s article, linked above, explains how much damage has been caused by this gaslighting about what we actually knew, a year ago, about CoVid-19. That’s on top of all the challenges we’ve had to face dealing with the known and unknown unknowns. The latter are inevitable; the former have resulted in millions of additional deaths. That’s why, even though we can’t blame the gaslighters for their mental illnesses, their gaslighting is such a tragic and devastating problem.

We’re facing the same challenge, and devastation, from climate and ecological collapse deniers, and from those who deny that the Biden administration has actually ramped up the atrocities of global imperialism (notably the horrific and continuing war in Yemen, the spraying of toxic chemicals on crops in Colombia, the dangerous escalation of warmongering and deceit about China, etc). Read Caitlin’s blog for that never-ending saga.

And these are problems we can’t “fix”. The systems of our civilization will continue to engender and reward sociopathy, and they are so vast and complex that only civilization’s collapse will, eventually, bring an end to them.

So what, then? You know I offer no answers or “solutions”, since there are none. But those of us predisposed by our conditioning to at least know what is going on, may just learn how gaslighting works — with such devastating effectiveness — and make ourselves less likely to be victimized, propagandized or bamboozled by it. And perhaps become more compassionate for its victims, and maybe even its perpetrators.

I have no idea how we will then live with ourselves. When it really makes no difference who we vote for, what groups we belong to, or what we do (beyond the very local level) as activists, what is the point in becoming a little less clueless?

Perhaps there is none. But those of us conditioned to want to know, no matter what, will, at least, know a bit more. As we all become chroniclers of civilization’s collapse, that, too, is the best we can do.

Perhaps we need a little symbol we can signal or send to each other that means “We are being gaslit“, that we can send each other as an expression of caution or compassion, and that can attach to all the mis- and disinformation we encounter from all sides. Maybe something like this?:

Maybe add this to the ten symbols for the types of science denial/disinformation shown in the earlier graphic, and let us use them as emoji-type labels we can append to articles as a kind of shorthand warning. Gaslighters are pretty merciless in their methods to manipulate us; perhaps we could use this shorthand to fight back.

2 Responses to Gaslit at Every Turn