I Don’t Cook, I Forage

(This is the second of at least four ‘miniature’ posts. I’m spending most of my time these days digesting what I’ve been learning, about myself and about others, from a raft of new people I’ve met in the past month, and from the experience, for the first time in 30 years, of living alone. This isn’t giving me enough time for my usual lengthy blog articles, but I wanted to at least get these four ideas out, for your thoughts.) 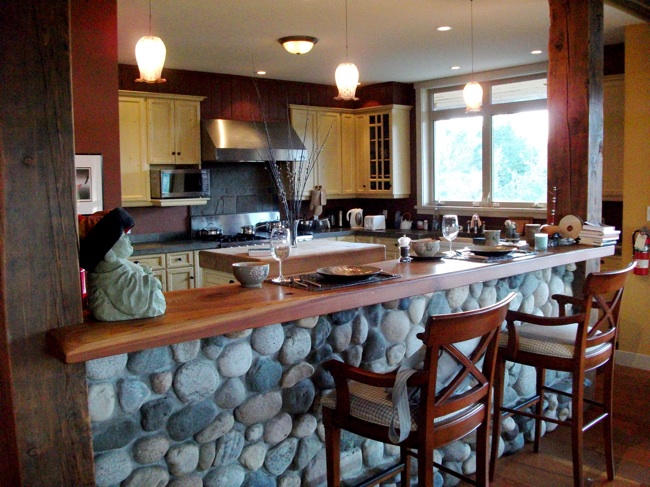 There is compelling evidence that for the first million years of human existence on Earth, we were almost entirely vegetarian, living in the trees, in rainforest. Those who lived near the sea were doubly charmed: not only was there an abundance of fruits and vegetables in easy reach, there were also sea plants and sea animals easy to catch and eat. Seafood provided us with the fatty acids necessary for brain growth, and that, combined with prehistoric climate change, allowed and/or forced us to expand our range outside the rainforest. There, plants of the type we could eat were in short supply, so we adapted and became almost entirely carnivorous, with the invention of the arrowhead and the discovery of fire. Then, perhaps thirty thousand years ago, we discovered catastrophic agriculture (the fact that certain hardy grains grew plentifully and exclusively in areas ravaged by flood or fire). We learned to exploit and perpetuate this agriculture and to process the grains to be edible, and this allowed us, finally, to settle, to have children more often than once every four years (since the little ones no longer had to be carried on long migrations), to eat an astonishing variety of foods, and to desolate the Earth with our soaring population and ravenous appetites.

That is a short history of human food, as we are coming to know it. A million years foraging easily as vegetarians, perhaps a hundred thousand as struggling hunter-gatherers, and then thirty thousand as settled omnivores. Our digestive systems have adapted remarkably well, though we never did have time to evolve the speed, agility, teeth and claws needed to chase down prey and tear raw flesh, so it’s a good thing those fatty acids gave us the brains to invent tools to do these things for us. All of this is imprinted in our DNA, indelibly. We are the product of over a million years of evolution.

Many of the people I know love to cook. One of the first bloggers I got to know when I began my Salon blog was Julie Powell, whose Jule/Julia blog, book and movie are now legendary. As I remember it, Julie’s fans were less interested in her personal life (or Julia Child’s) than in exactly how that day’s recipe on page 132 of the cookbook worked out, and how other readers’ experiences with the same recipe compared to theirs.

I was married to a woman who cooked very well, and preferred that I stay out of the kitchen where I was, she felt, just in the way. I expected that now, living alone, I would rediscover a passion for cooking, and jump into my barely-touched Veganomicon with enthusiasm and abandon.

I have not. I’ve read the book, and found it well written and entertaining, but most of the recipes seem to be, well, work. I’ve ploughed through a few recipes and they turned out OK, but much of the time I prefer to just throw together a bunch of raw foods, cut ’em up, make a salad of them, or a sandwich, or a soup, or a simple stir-fry, or just lay them out around the edge of a plate or two and eat them just as they came from the garden.

I’ve concluded that I don’t cook. I forage. Whether it’s in my kitchen with its bins of nuts and seeds and crisper drawers of vegetables and leaves and sprouts and shoots, and bowls of fruits and cupboards of breads and crackers and shelves of jams and salsas and spices, or in the local organic foodstore the Ruddy Potato or the cheaper Vancouver Whole Foods (a ferry ride and a bus ride for those like me who are now car-less),  I am the primeval gatherer. Instinct tells me what to buy, though I avoid non-vegan foods, choose local, organic and raw whenever possible, and avoid GMO and any processed foods whose ingredients aren’t natural and recognizable. But I’m not averse to buying (mostly locally) prepared foods that are not highly processed, especially when it comes to desserts or difficult or time-consuming to make foods.

I guess that makes me lazy. But I feel great kinship with our ancient ancestors. Like our cousins the (mostly vegan) bonobos, they ate an astonishing diversity of different plants, most of them as simple as bananas to obtain and eat. Eating shouldn’t have to be work. It should be easy and fast and fun, and healthy and nutritious, and it should occur when you’re hungry, not at any specified meal ‘time’. We’re natural foragers, in our kitchens and our grocery stores.

Eating is, of course, a social act, and I appreciate that there is a joy in preparing food for others to share, and in the appreciation of that gift. But still: The popularity of the ‘buffet’ shows that we still like to forage, to make personal choices, to mix things up for ourselves, to take what comes, to try stuff. That can be done with raw vegan foods too, and I can’t imagine a guest being insulted at having the choice of many fresh, well-laid-out natural foods, without the fuss and time required to actually cook anything.

I suppose I’m just too new to this cooking thing to really get it. I have at least a million years of catching up to do. What’s this desire for heat and the mingling of flavours all about, anyway? Are my taste buds missing something, or is this a cultural thing, like the desire to wear shoes?

13 Responses to I Don’t Cook, I Forage