Integrating Six Models of a Better Way to Live 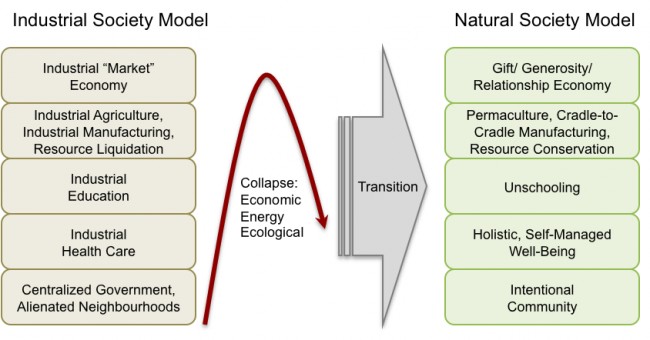 Since I’ve retired I’ve been spending more time meeting with people in, and learning more about, six movements that are proposing, and working to implement, models of a better way to live. My motivation for this is simple: I believe our industrial civilization is going to collapse (in cascading spasms) in this century, and I want my grandchildren to have the tools and knowledge to deal with the crash and, if they survive it, to create a more sustainable society in its aftermath.

The six movements are:

These movements don’t have heads, gurus, controlling organizations or centralized management. That’s why I describe them as movements. They are organic and largely self-organized. And all six movements are fundamentally community-based, and may not scale particularly well. Their practitioners share stories and practices of what has worked and what has not, and respect that each community is different and must therefore ‘realize’ the principles of the movement differently.

I’m fascinated by all six of these movements, and by the struggles each is having getting traction in our teetering industrial society. It’s heartening to see that their members are starting to talk with each other. The next meeting of the Fellowship for Intentional Communities has a session on the Transition Movement, for example, and the Village Building Convergence, an ambitious and well-established “make our city more livable” program in Portland has a whole workshop on the Transition Movement this year. (By the way, I’ll be attending both events later this month in Portland — let me know if you’re going, or if you’ll be at the Unschooling event in neighbouring Vancouver WA also taking place at the end of the month.)

It seems to me that all six of these movements offer a piece of the puzzle of how to live better than our current industrial society/civilization currently allows. I thought it might be useful to see if we could fit all six pieces of the puzzle into an integrated model.

Here’s what each of the six movements could bring to such a model:

I see the Transition Movement as the umbrella “adaptive change” movement, since I think it can and must broaden itself to accommodate adaptation to economic collapse, and with it the collapse of health care, education and other institutions. I see the Gift/Generosity/Relationship Economy Movement as the natural community-based economic model, the one that will work sustainably when trade, currencies and centralized globalized corporations collapse. I see the Intentional Communities Movement as the social and political model, the one that will show us how to live together peacefully and cooperatively once more in community, instead of under large inflexible centralized governments and the tyranny of lawyers and law-enforcers, since most governments are likely to go bankrupt and simply cease operating when civilizational collapse begins.

I’ve tried to depict this in the diagram above, but I have a number of concerns with it:

I’d welcome any thoughts on how to pull this all together and present/represent it better. Is there a better name than “Natural Society”? How might this be pitched to the hard-working people in each of the movements in a way that is constructive, inviting, and collaborative, rather than appearing to subsume or layer more responsibility onto them? Or is this attempt to integrate them a waste of time and energy — will they find ways to work together naturally when they recognize the advantages of doing so?