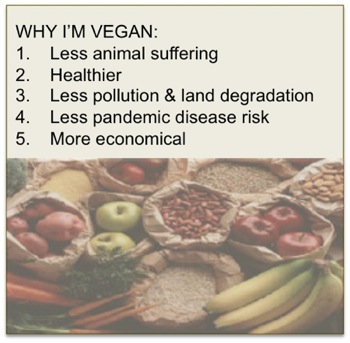 Don’t read Jonathan Safran Foer’s new book Eating Animals. You don’t want, or need, to hear the results of his extensive, hands-on research into factory farming. You don’t want to hear yet another reformed vegan tell you:

You don’t need to read the book. You know all this. There are reasons you still consume animal products, that are, inevitably, factory farmed. Eating is, after all, a social activity. It makes people really uncomfortable to tell them you’re vegan, and talking about it is hard. It’s even harder to replace all the animal products you use (especially eggs and dairy for baking and flavouring) with vegan alternatives, and to find replacements for the ‘processed’ products (sauces, desserts, breads) that you buy because it takes time to make them from scratch.

So here’s what you do. At least, here is what I’m going to do, as I take the last small step to being vegan, all the way, all the time:

Not so hard after all.