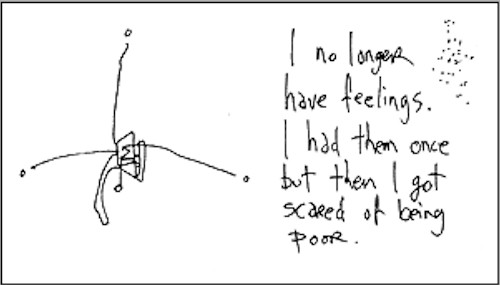 “Though we rush ahead to save our time, we are only what we feel” — Neil Young, On the Way Home

In Grade Two I learned not to feel. Until then I felt everything, with all my heart — I fell in love for the first time when I was five, and the world was perfect. In our neighbourhood we’d play tag or hide-and-seek or football or go skating or just bounce a ball against the steps to see who could catch it, until the sun went down and we could hardly see, or in the winter until the moonlight and lamplights made the new-fallen snow glisten like diamonds, and our hands and feet got numb from the cold and we’d stoke the wood fireplace in the temporary shed beside the outdoor skating rink. And we’d sing our hearts out. And cry inconsolably for hours when a tiny bird crashed against our windows and our attempts to nurse it to health with sugar water in an eyedropper didn’t work. And stories were as real as life. And we’d get so intoxicated by some moment of simple joy we’d  laugh until we fell down or threw up. And we’d race home in torrential and violent thunderstorms, fearless, drying ourselves sitting in front of the hot air radiator, with the smells of dinner coming from the kitchen.

But in Grade Two something changed. Some of the kids at school started to lie. Or to threaten to hit you or take something from you. Or they’d say things just to be mean, even the girls. Where everything had been cooperative, collaborative before, now everything was a competition, and if you weren’t smart, fast, coordinated, tall, unblemished, well, you were a loser. If you were good at school but not smart in other things you were a suck, which was worse than being stupid. And for the girls you loved, it was no longer enough to be authentic, to care, to be imaginative and playful and faithful. You had to be handsome, clever, worldly, funny in a new and impossibly complicated way. You had to be something you weren’t, and couldn’t be, and didn’t want to be.

It became dangerous to feel too much. The twisted kids who you used to feel sorry for discovered they could manipulate others, and in the anarchy of the schoolyard they suddenly had power. It was like they were inflicting the damage inside them on everyone else and no one was saying anything, as if what they were doing was normal, or impossible to stop. Kids who’d been in boarding schools or juvenile detention centres bragged about how tough they were, that they were survivors and you’d better get tough or life would get very hard for you.

So I learned to stop feeling. I withdrew into myself, and was labeled a “shy kid”, which I’d never been, and for nearly ten years I lived in a world of my own, a “daydreamer”, a disengaged and marginal student, an “underachiever”. I would let homework pile up until I was sick with dread about getting caught out, and then work like mad to get most of it done, but I’d never really get caught up. If a girl talked to me, which happened rarely, I would almost pass out from anxiety, from not knowing what to say. I was completely disconnected from the world and from myself. I couldn’t dance, or swim, or do sports. I was no fun. I just wanted the world to go back to the way it once was. Eventually I forgot what that was like; it was too hard and painful to remember. Finally I stopped feeling lonely because I couldn’t remember or imagine any other way to be. That was the last thing I stopped feeling.

I was rescued, in my last year of high school, by an Unschooling pilot program that I’ve written about elsewhere on this blog. My adult life was, until recently, plagued by bouts of deep depression and chronic anxiety, but at 18 I had broken through, become functional, learned to love again, and to believe (perhaps too much) in myself. I had become, after years detached from reality, an incorrigible idealist, and still am, for all the good that’s done me. When you live inside your head, in your imagination, every dose of hard reality is a blow, a disappointment, a fall from brief and fleeting grace. But I had learned to be clever at a few things, thanks to my peers, and that cleverness and a renewed self-confidence combined to make my adulthood one of almost uninterrupted success, at least in the ways that our society measures it — position, money, material possessions. Purpose.

I was happy with my success. I was, most of the time, numb. The one feeling I had that came up fairly often was anger, and it was ugly, so I learned to suppress it. I was good at suppressing things in myself. I’d had a lot of practice. And when crises came up I coped with them the way I always did — a mix of retreat into depression, anxiety, procrastination, and, finally, figuring out all by myself what had to be done and, when there was no other choice, doing it.

Thirty years later I woke up and realized that what I wanted in life was not the many things I’d achieved and acquired, and that in their pursuit and accomplishment I’d forgotten about the things that I once thought were most important: Ending the devastation of our planet, which was now being perpetrated by, mostly, stupid white men of my own once-idealistic generation. Stopping the suffering of animals. Bringing human population back to sustainable levels. Bringing equity and justice and dignity and opportunity to the 99% of the population who struggle all their lives against impossible and unfair odds just to survive and to be, once in a while, happy.

For the last decade, most of it chronicled in this blog, I’ve tried to understand how the world really works and why it’s so awful (at least, to an idealist), and what we could do to create better ways to live and make a living. I’ve learned a lot, and, I told myself, as soon as I retired I would put this new knowledge, and my new health (the result of overcoming a terrible illness four years ago, also well chronicled in this blog), to good use.

This year, I retired.

For the last few months I’ve lived the life most people dream of — retired comfortably from paid work, living in a paradise, debt-free, worry-free, loved, loving, open to love, very healthy, free from any onerous responsibilities or commitments, and free to do (or not do) whatever I want each day.

As some people warned me might happen, I’ve become a bit lazy (and perhaps hazy) as a result. I’ve made far too little progress on my What You Can Do (to make the world a better place) list of intentions*. So what am I doing with my time? Bottom line: I’m not spending any more time on reconnection, capacity/competency building, activism, new model creation, reflective and creative activities  than I did when I was working full-time (i.e. still three hours a day). The six hours a day (average over a seven-day week) I used to spend working I now spend in play, in cooking and housekeeping.

I tell myself I deserve to spend some extra time playing — just doing whatever I feel like doing on the spur of the moment each day — as part of the transition from paid work and as part of learning how to manage my days effectively and responsibly now that I have no external demands on my time.

But I have this gnawing feeling that, freed from anxiety, I’m actually getting ‘spacey’ — even more disconnected from the real world, and from my feelings. For example, I recently hiked around the Island to three of Bowen’s best beaches, and then played around with the photos I took of them, for hours; and I used telephoto pictures, Google maps, Google earth and triangulation tools to identify most of the mountains and houses I can see in the distance from my new house. And I’ve spent quite a bit of time meeting new people and attending various events I would never have found time for when I was working, just for fun. These are pastimes, diversions.

All of it has been somewhat disconnecting, and left me disengaged from the real world. These activities are mostly pretty superficial and emotionless. I’ve begun to wonder whether, suddenly finding myself without other people making demands on my time , telling me what I must or should be doing, and without constant feelings of time pressure and expectations — my freedom from anxiety has become freedom from feeling.

What is it I’m ‘diverting’ myself from? Why is it that I’m only really connected with my feelings:

I came to this island, this paradise, for sanctuary — protection and healing. Sanctuary from what?

In the gorgeous Reid & Shamblin song “I Can’t Make You Love Me“, made famous by Bonnie Raitt, about not having a choice when it comes to love, there’s a line:

“You can’t make your heart feel something it won’t”

What is the matter with my heart?

17 Responses to Thinking About Feeling