The Circles We Move In 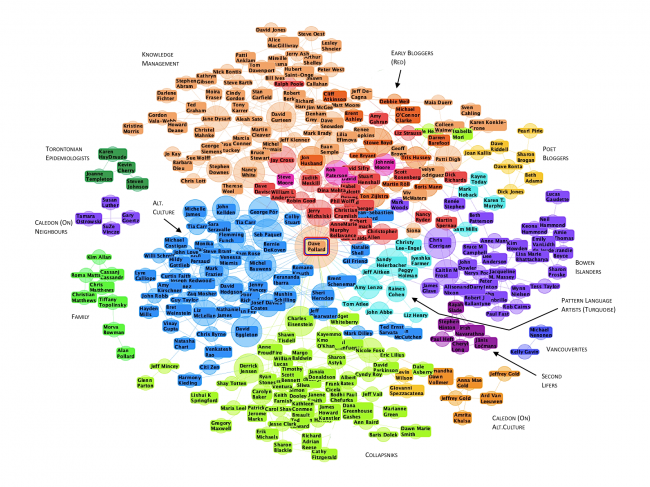 Seb Paquet put me on to a free (limited, demo) app called TouchGraph that analyzes all your ‘friends’ on Facebook, and colour-codes them depending on the number of connections they have to your other friends. Mine is shown above, with my own rough ‘labels’ for the 13 main colour ‘clusters’ the app identified added around the edges.

With those caveats, I confess I found this graph absolutely fascinating. The fact that a ‘dumb’ software program, simply by identifying how many of your friends are friends with your other friends, can identify 6-14 distinct clusters of people, whose defining commonality just leaps out at you, is amazing to me. Subconsciously I always knew I moved in these different circles, but to have them identified explicitly was astonishing. Even within clusters, I can identify further sub-clusters of friends who, in the graph, are shown together.

I was also intrigued about two qualities of these clusters: (1) the widely-varying proportion of people in each cluster who I had met face-to-face (nearly 100% in some clusters, less than 20% in some others); and (2) the widely-varying proportion of new friends in each cluster (most of my Bowen Island and Collapsnik cluster friends are new in the last two years, and had I run this software then, neither cluster would have shown up at all). And while my name is still in an orange (Knowledge Management cluster) circle, because a tiny plurality of my friends fall in that cluster, it will, if my friend mix continues to shift as it has for the last year (and/or if more of my friends in some of the other clusters join FaceBook) change to light blue (Alt Culture cluster) by next year and either purple (Bowen Islanders) or light green (Collapsniks) by the following year.

The software app allows you to click on any of the friends and see which other friends they’re friends with. This was a real eye-opener for me. Very few of my friends had friends in more than one cluster. A few of my friends have 60-70 friends in common with me, but even they were clustered close together. To some extent, of course, this is a tautology — the clustering is based on patterns of shared friendship. But I was still struck by how, for example, some of my knowledge management friends and early blogging friends and Bowen Island friends have expressed agreement with my alt-culture and even collapsnik ideas — but have no Facebook friends in those clusters.

I looked closely at Seb’s networks, for example, and discovered I am connected with a large number of his friends, including having at least one friend in 6 of his 7 largest clusters. Yet on my graph, almost all of these common friends are in a single cluster. The person on my graph who is connected to the largest number of my clusters (other than me) is Charles Eisenstein.

What does all this mean? I’m tempted to think my circle of friends is more diverse than most people’s. Part of that may be attributable to the fact that I’m comfortably retired from paid work, so I have more time than most to cultivate non-work-related friendships. Part of it may be attributable to the fact I live on a small island (and have to some extent always lived in places isolated from many like minds) and so to find meaningful friendships I have had to search online and cast a wider net.

Like most of us, I think, my circles have emerged around four things (the community types in italics below are based on Aaron Williamson’s model of community and identity):

I’ve thought about how I present myself to these 13 different circles I ‘move’ in, to see whether I might be guilty of keeping them disconnected from each other. But I don’t think I have done so. I bring the same persona to all these circles, the same one that is presented, as candidly as I dare, on my blog. And on others’ graphs I’ve seen I do seem to be a ‘connector’, despite my fussiness about who I ‘friend’.

My ten-year-old blog is, in fact, the common denominator behind all but the Knowledge Management, Caledon Neighbours and Family circles — the only three clusters to predate it (and to predate my presence on Facebook). My blog has got me the work and led me to the post-retirement activities I do (and to my book publisher). It led me to move to Bowen Island. It brought me into alternative culture and others who share my beliefs in civilization’s impending collapse. And it introduced me to other early bloggers and enticed me to try Second Life.

Or should I say my blog’s readers did these things. As the things I did, the places I lived, and my beliefs and interests shifted, so did the content and readership of my blog. Even now, much of what I have to say on Facebook is linking to my latest blog articles (and back, through my Links of the Month posts, which draw heavily on what friends have posted on my Facebook ‘newsfeed’).

The truth, I think, is that my single persona manifests itself differently in these circles, not by what I discuss with friends in these various circles, but by what I don’t discuss. We hear, and read, what we want to, and tend to disregard, to not ‘hear’, the rest, even when it comes from friends.

So, for example, while I am involved in the Transition initiative on Bowen Island, which brought Carolyn Baker (light green cluster) to Bowen recently to talk about coping emotionally with collapse, the people who showed up were, for the most part, not my Bowen Facebook friends (purple cluster). The reasons for this are complicated, but the bottom line is that none of my Bowen friends are (yet) her friends, and almost all of our 30 mutual friends are in my light green cluster — connected with each other but not with my other circles.

My Bowen friends (and my family, and my friends in most of the other circles for that matter) are not (yet) much interested in discussing or learning about collapse, so after a while I don’t talk about it — either they don’t hear it or they don’t want to. We talk instead about other things — shared activities, shared beliefs not related to collapse, shared interests, or what’s happening of consequence in our physical communities. I’m still the same person with the same beliefs, but the opportunity to ‘bridge’ my networks rarely arises. No big deal. When the opportunity to do so arises, I’ll be ready.

If you’re on Facebook, and try out the TouchGraph app, let me know what insights arise from it for you. And if you’re a student of community and networks, I’d be interested in your take on Aaron’s model of community and identity (see link above), and specifically the four things circles emerge and evolve around.

1 Response to The Circles We Move In