Why I (Still) Blog 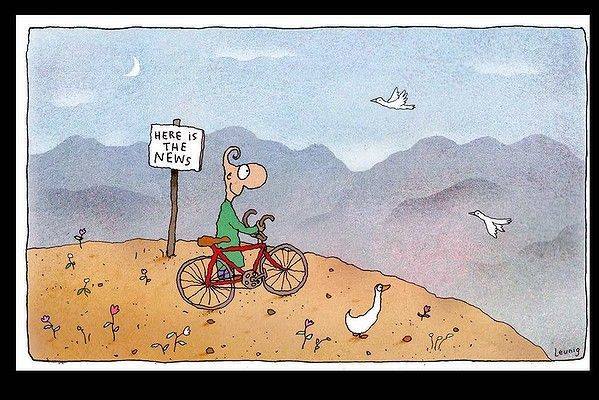 cartoon by the amazing Michael Leunig

Reminiscent of the early-blogosphere Friday Five, Marc Hudson of Manchester Climate Monthly asked me 5 brilliant questions and posted my responses on the site. I thought I would repost them here for anyone unaware of and curious about how and why this blog got its start:

1) When did you set up the blog and why did you call it “How to Save the World”? Was it a bit tongue in cheek?

I started the blog in 2003, in the early heyday of blogs. At the time, if you wanted to get attention online, in the blogosphere, you needed a catchy name, so that’s what I chose. Little did I know how many bizarre e-mails I would get from all over the world as a result of that choice! Over the years, I’ve alternated between believing that some of the things I was writing about really could ‘save the world’, and believing, as I do now, that the ‘world’ can’t be and needn’t be ‘saved’, and that civilization, which we often mistake for the ‘world’, shouldn’t be saved.

2) You no longer believe it is possible to “save” the world – was that the result of an epiphany, a sudden shock, or more a gradual unfolding awareness? What, in either case, was it that made you think “uh-oh…”?

I think what look to be epiphanies are more just a case of certain information, viewpoints, ideas or insights being presented to you at just the right time. I read John Gray’s Straw Dogs in April 2005 after someone recommended it to me and I picked it up at a bookstore near my hotel in Montréal. I was staying there in preparation for a major work assignment the next day, but I got so enthralled in the book I stayed up nearly all night reading it, pacing the floor of my room, just saying “wow!” over and over again. Gray wrote:

The mass of mankind is ruled not by its own intermittent moral sensations, still less by self-interest, but by the needs of the moment. It seems fated to wreck the balance of life on Earth — and thereby to be the agent of its own destruction. What could be more hopeless than placing the Earth in the charge of this exceptionally destructive species? It is not of becoming the planet’s wise stewards that Earth-lovers dream, but of a time when humans have ceased to matter…

Political action has come to be a surrogate for salvation; but no political project can deliver humanity from its natural condition. However radical, political programmes are expedients — modest devices for coping with recurring evils. Hegel writes that humanity will be content only when it lives in a world of its own making. In contrast, Straw Dogs argues for a shift from human solipsism [belief in our aloneness and our disconnection from everything else]. Humans cannot save the world, but this is no reason for despair. It does not need saving. Happily, humans will never live in a world of their own making…

When I woke up the next day, everything seemed different; my entire worldview had shifted. But it wasn’t because John Gray is a genius; I just found his book at a time when I was precisely ready for it. Several other books had paved the way.

3) What do you enjoy about blogging on such terrifically difficult (some would say terrifying!) subjects? What has made you keep going?

I keep blogging because I owe just about everything about my current situation to my blog. My writing and my readers’ responses have shaped and radically altered my worldview. I quit my job because of it, and found my next (and last) two jobs through it. My book publisher found me through it. I’ve fallen in love because of it, and found many of the people who have become the most important in my life through it. So I can’t not blog. it’s part of who I am. It’s my auxiliary memory, my means to think out loud and figure things out when there’s no one I can talk to in person about things. By writing these terrible realizations about the inevitability of civilization’s collapse on my blog, I was able to formulate them and generate the courage to say them out loud, unapologetically. And I found lots of people who, rather than thinking my ideas were (as one reader put it) “doomer porn”, came out and said “Yes, that’s what I think and feel and sense and intuit too! I’m not crazy! You’re not crazy!”

4) If you could give your much younger (16? year old) self some advice – about anything (you choose the topic) – what would it be?

Probably EE Cummings’ advice about the importance, if you want to be a writer, or even a fully realized human being, of having the courage to be “nobody-but-yourself, in a world which is trying its best every day to make you everybody-else”. The big problem about being “nobody-but-yourself”, of course, is that for most of us, before you can be that, you need to discover, or remember, who you really were, which takes, in my experience, a lifetime of learning about yourself, by which time most of us have forgotten who we once were before we started to become everybody-else anyway. Still, somehow, it’s good advice to try. I wouldn’t listen to any other advice if I were 16, so I usually have the good sense not to proffer any.

5) What will it take for the myths we live by – of infinite growth on a finite planet, of the ‘naturalness’ of industrial civilization – to be overthrown/rendered non-functional? Do we have much/any power to shape what comes next?

I don’t think we have any power to change anything on a large scale. Even individuals who seem to have accomplished great things only did so because they built on what came before, and were in the right place at the right time when the world was ready, and in any case I think the change was probably inevitable by the time they did their famous thing or said their famous lines — they just “named” what was already happening. We humans are very culturally malleable, and it is possible, when the aforementioned circumstances are just right, to get people to change their minds quite drastically and quite quickly. But getting people to change their behaviours is something very different. It takes much longer, when it happens at all.

What we can do, I think, is to change our own behaviours, and exemplify what we believe, to “act in accordance”. We can’t know what difference that will make to the world, but instinctively I think our own personal actions, seen by others one-on-one, can have enormous ripple effects. Not enough to save the world, but enough to make a lot of people’s lives just a little better.

As for changing myths, the problem with that is that myths are a retrospective view of truth. They only become myths in hindsight, when a lot of people collectively agree “oh, yeah, that’s what happened”. You can’t change myths any more than you can change the past. When civilization is past, and that won’t be too long now, the current myths about it will be dashed because people will say “oh, infinite growth and the belief that civilization was the best and only way to live — what preposterous ideas; how could people back then have been foolish enough to believe them?”

6) Anything else you’d like to say/wish I’d asked you?

Just a message to your readers: Thank you, everyone, who is questioning, hurting, grieving, struggling, trying to understand, trying to make things better. Thank you for caring, and for what you do. Whether our collective resistance makes a difference or not in easing the pain and damage of civilization’s collapse, people millennia hence will at least know that there was resistance. To the extent we shape the myth of civilization as it’s understood by our distant descendants, we just might help them avoid repeating our mistake, and that I think would be the greatest gift we could ever hope to give to this world.

4 Responses to Why I (Still) Blog