The Patterns of Effective Conversation 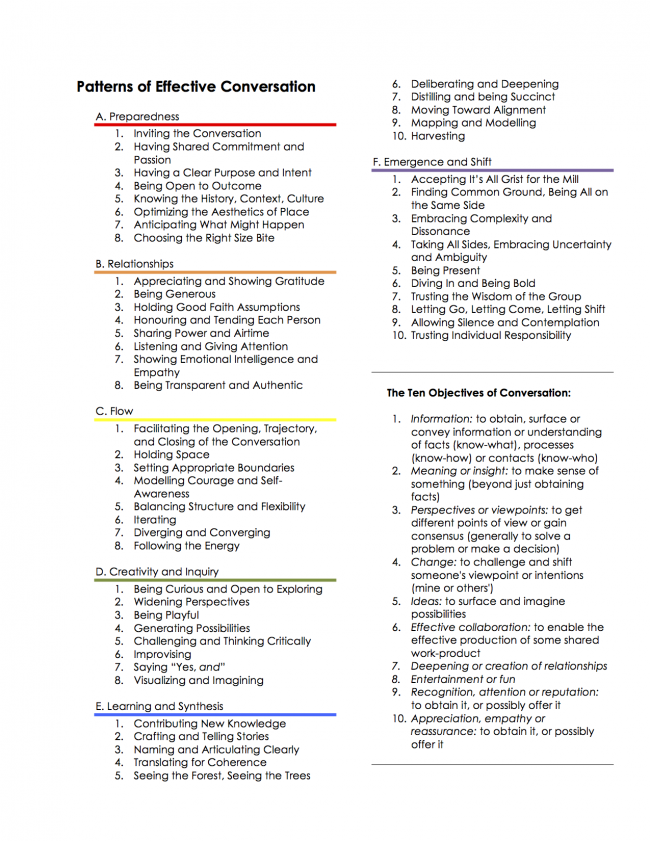 A week ago, at the Next Edge Festival in Montréal, I made a point of paying attention to the many conversations I had, or witnessed, in both small and large groups. It was an eye-opening experience. What I learned was:

In chatting about this with a friend, the excellent writer and excellent conversationalist Paul Heft, he posed the question to me “What do you want from conversation?” My answer was, of course, that it depends on the subject, the context and the participants. What I might be looking for in any particular conversation could be one or more of the following:

What I observed was that people seem to have varying biases among these objectives. Males generally seem to seek #9 more than #10, and women the opposite (with some notable and interesting exceptions). Narcissists seem to want both #9 and #10 (and are very clever at hijacking conversations to get what they want). Learning style appears to strongly influence conversational objectives: People who learn by debating tend to like objective #4, for example, while others who learn by contrasting different perspectives more passively seem to prefer objective #3.

I also learned that when the objectives of the participants in the conversation are not aligned, the conversation can be like a tug of war, almost comical (in a tragic way), and in most cases with very unsatisfactory results for all.

What was more distressing was to notice how often participants are clearly not aware of what their real objectives are at all; they seem to somehow expect other participants to figure it out and satisfy them nevertheless. From my observation, this expectation is usually not met.

In the ‘conversation’ between a writer and his/her audience, any reasonably coherent author is generally explicit about what the objectives of the writing are, and the reader/listener can choose to read/listen or not (and they will generally choose to read/listen only when the author’s explicit objectives and theirs are aligned). Not so in oral conversations, where you can see on the faces of people that they thought a conversation was going to achieve one of their objectives, and now feel trapped helping other participants achieve very different objectives.

Thinking back to my many years in business, the majority of the conversations seemed to have very narrow and explicit objectives (most often #1, and especially requests for “know-who” (“Who do you know who knows about…?”). Yet these conversations also clearly had a lot of unvoiced, unacknowledged and unrecognized objectives, what we call hidden agendas.

Social conversations, on the other hand, often seem to have no explicit objectives, which is perhaps why so many people are shy about them, and why these conversations are often awkward. Family conversations frequently appear even more so, and can also have hidden agendas. Easier to bury your face in your gadget and ‘converse’ online with people whose objectives are more overt and aligned with your own.

I have noticed that many young people have learned to cope with the ambiguity of written conversational text and with the general inarticulateness of the current age. Their rule seems to be: Don’t judge what you’ve just read until you get the context and clarification of what was really meant, which could be several dozen “I mean…” texts down the road. Someone has dubbed this “the successive approximation method of communication”.

Since I have been dabbling in pattern languages, I thought it might be interesting to see if it were possible to identify the patterns of effective conversation. Since conversation is a special type of “group process”, it seemed logical to start this inquiry with the pattern language for group process (“Group Works”), which I played a small part in bringing into the world. I reviewed some of the best and worst conversations I’ve experienced, and was able to cull the 91 Group Works patterns down to a more manageable 52 patterns of effective conversation. The result is shown in the diagram above. Please note that it’s just my own thinking, a “straw man” for discussion, and hasn’t gone through the rigorous validation process that Group Works has.

The best conversationalists I know are extremely adept at invoking many or most of these patterns subtly and at opportune times during a conversation. If you read them through I’m guessing you know people who are particularly skillful at employing many of these patterns in conversations, with noticeable results. You probably know people who are particularly inept at invoking them (e.g. C3. Setting Appropriate Boundaries) with infuriating consequences — they can derail a conversation completely.

Note that these are patterns of good conversations, not techniques or practices. Some can be invoked but others just emerge (or fail to emerge) and need to be dealt with through an appropriate intervention in the moment. The skill is as much in noticing and learning the presence or absence of these patterns as in trying to employ them consciously. They are attributes of conversations more than instruments.

I’ve started keeping a copy of this list in front of me now during conversations (when I can do so unobtrusively), just to notice how I and the other participants in our conversations fare. I’m discovering specific patterns I need to work on more, and am starting to learn why the best conversationalists are so good at it. Feel free to download this PDF of the draft pattern list and tell me what you think — what’s missing, and where am I missing the point?

Now if only there were some way of improving the coherence and articulateness of conversationalists! I’m too old and impatient to learn the successive approximation method. So I’m learning that, for me, the patterns in Category F (Emergence and Shift) are essential to conversations with people who have very different conversational styles and worldviews from mine, and might save me from becoming even more of an impatient, misanthropic and curmudgeonly conversationalist than I already am.

Do you know the etymological origin of the word conversation, what it meant until the 16th century? Take a guess and then check it out — it might make you think differently about what a conversation really is.

2 Responses to The Patterns of Effective Conversation