What Are You Going to Do When the Internet’s Gone? 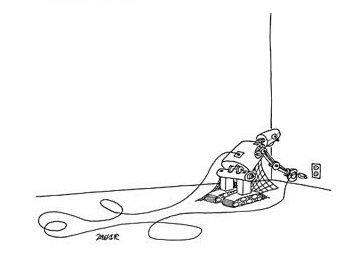 Cartoon by Jack Ziegler in the New Yorker. You can buy his stuff here.

What are you going to do when the Internet’s gone? That is the question that no one dares ask. I’m not talking about Net Neutrality and the takeover of the web by corporate interests. I’m talking about its simple disappearance, as infrastructure that’s simply unaffordable and unsustainable in a world of economic, energy and ecological collapse, stops working and falls apart.

The technophiles, the “bright greens” will tolerate no such talk, of course. They believe with a religious passion that technology will solve all the world’s problems (and let us live forever to enjoy the resultant eternal bliss of allknowingness). But the “dark greens” — the post-civs who see our society collapsing (“all civilizations do”) probably in this century — want to believe too. They want the Internet to help them organize resistance to the corporatists and globalists who are exacerbating the crises driving us off the edge of the cliff, if not in time to stop it, at least enough to be able to piece together some alternative models of how to live sustainably that the survivors (our grandchildren) will be able to use.

So asking this question generally raises a lot of scowls from all sides. Even the corporatists have become utterly dependent on it for the information and communication systems of their dysfunctional and plundering empires. A world without the Internet is simply…unthinkable.

Until you think about it. Consider that:

Just as in the last Great Depression, the collapse of essential information and communication infrastructure won’t happen all it once. It will be a gradual decline. The first signs, I think, will be the loss of the generosity economy features that have made the Internet so ubiquitous — the free software and free services that advertisers and ‘free-mium’ service buyers and enthused volunteer labour funded. There are already some disturbing signs of this happening: Gaia.com, a large blog platform, has folded; Friendfeed has been bought out by Facebook (which, despite its immense popularity and reach, has surprisingly small revenues and must be operating on razor-thin margins); Yahoo has been closing many of its services and is rumoured to be in difficulty. And all the wonderful stuff we have from Google comes thanks to advertising revenues, even though there is almost no evidence that such advertising is effective.

So what you’ll see, I think, is a lot of consolidation, disappearance of free services (Ning recently announced it is abandoning all its ‘free’ services, and their customers) and an annoying increase in fees (the giant global right-wing news empire News Corp is again planning to start charging for its content). “The end of free” will drive millions of Internet readers (and writers) away. Advertisers will then flee. What will be left will be tons of people using ‘free’ bandwidth to try to download huge amounts of ‘free’ music and video, and ISPs will then find relatively little resistance to them bringing in huge increases in bandwidth fees (and the end of fixed rates). If you’ve ever dealt with the outrage of ‘roaming’ charges for data, imagine such charges for all use.

The next wave of the Internet’s decline will be when the next long Depression begins, probably in a decade or two. When communication and electrical service becomes intermittent as utilities cut back, Internet service, having been marginalized by the events described above, will be considered a non-essential service, and regularly shut down in favour of more critical uses of these services. And then, as PCs become less ubiquitous and people get used to finding alternative ways to get their information and entertainment, and as the availability of components and materials falls and their cost increases, computers will start to become community resources rather than personal ones, and you’ll have to go to the library or the neighbourhood school to find one in working order. And eventually even these will break down, and people will, as they always do, find workarounds.

I’m sure most readers of this article are shaking their heads, saying this will never happen. And I’m sure that most readers who are also students of history are probably nodding their heads, saying they can imagine this, and perhaps it wouldn’t be so terrible. True innovation blossoms when there is a real human need that is not being met, and the need for information and communication and entertainment is eternal. How to evolve and adapt to the end of the Internet? Maybe like this:

And in the meantime, don’t take the Internet and all its ‘free’ offerings for granted. It’s a rare window of incredible opportunity, and it won’t last forever. Like everything else in our overwrought civilization, it’s unsustainable.

22 Responses to What Are You Going to Do When the Internet’s Gone?