Colonization, from Without and from Within 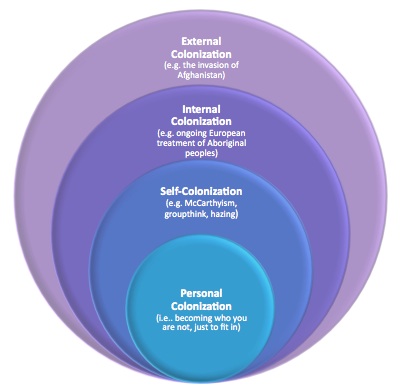 “And where will we hide, when it comes from inside?” — James Taylor

Colonization is a loaded word, depending on whether you are the colonizer or the colonized. Throughout the history of our civilization, colonizers (imperialists, conquistadors, missionaries and, most recently, globalization corporatists) have asserted that colonized people were “savages” who needed external rule imposed on them “for their own good”. It matters little whether such assertions were honest, well-intentioned and misguided, or blatant excuses for theft, murder and oppression. The whole world is now substantially a single homogeneous colony, a single culture imposed and enforced by political and media propaganda, economic coercion, and of course, brute force.

The world “colonize” is from the Latin (whose speakers were accomplished at it) meaning “to inhabit, settle, farm and cultivate”. This definition carries no pretense of doing anything for the benefit of the “colonized” peoples. It just means taking over the land and resources, with or without violence and displacement. The words “culture” and “cultivate” also referred strictly to farming activities until, a mere two centuries ago, their meaning was expanded to include the intellectual, political, economic and social activities of civilization.

Such is the malleability of the human mind and conscience, that colonization occurs, to a greater or lesser extent, at four different levels, and the fact that the more interior forms of colonization are less obvious and often sub-conscious merely makes them, and their effect, more insidious. The four levels, depicted in the chart above, are, reading from the outside-in:

External colonization historically occurred when there was insufficient land to sustain a group. Boundaries were tested, and, in Darwinian fashion, the conflict was resolved in favour of the “fittest” — not the strongest, necessarily, but the group that could best “fit” themselves to the types of food and the carrying capacity of the disputed land. Most such conflicts were won by the incumbents, since they “knew” the land better, and since an easier solution for the invading group would be to manage their own numbers to adapt to the carrying capacity of the land they already were familiar with. The same is true for most wild species — it is in the best interests of all-life-on-Earth to avoid massive conflicts and instability, while introducing new variations that, in some cases, will improve “fitness” and resilience, even though they may create a temporary disequilibrium. Resilience is optimized by diversity, which is why, in the absence of catastrophe, evolution tends towards greater complexity and variety of life forms and “cultures”.

Sometimes, however, there are major natural catastrophes that produce sudden changes and extinctions, that may take a long time to find equilibrium again. The fifth great extinction, 65 million years ago, was the result of a massive meteor collision with Earth, which extinguished most of the life-forms on our planet and made possible the emergence of our weak and ill-equipped (relative to the dinosaurs) species. Then, some other unknown event about a million or so years ago knocked the Earth slightly off its axis and precipitated the Ice Ages. Our species’ (brilliant) response to this catastrophe was to invent hunting tools (the invention of the arrowhead and spear marked the dawn of the sixth great extinction), agriculture and civilization. And with these inventions came explosive population growth and the need for colonization. This colonization was assisted (and made more violent) by the discovery that our hunting tools could also be used as weapons against our own species. As our numbers continued to explode beyond sustainable limits, violent land conflicts accelerated. And as our inventions allowed us to move much faster much more easily and learn about life elsewhere, we discovered the need for “preemptive” colonization to prevent the peoples who might resent our invasion of them, or covet our wealth, from attempting to attack us. We also learned that we could colonize without physically occupying the land of the colonized — we could colonize economically or (with nukes or drones) militarily.

With the growth of civilization, colonization became the major economic activity of our species, and it has remained so ever since. But now that we’ve run out of new places to colonize (and space will, despite the dreams of the technophiles, never be colonized by our species, though the bacteria are likely to succeed at it). And, while we continue to recolonize areas that refuse to accept the dominant culture, we are now struggling with the challenge of dealing with the colonized survivors who cannot or will not “fit” into our culture. A popular solution to this challenge has been to exterminate them, and the number of languages disappearing every year on our planet attests to our success at this solution. Physically non-violent attempts at internal colonization, however, have been less successful. As convenient as it may be to blame indigenous peoples for the high rates of suicide, substance addiction, violent crime and unemployment in many of their internal communities and in our cities, these are all artifacts of internal colonization, the failed attempt to force people to adapt to a culture that is not, and can never be, theirs.

The way in which our civilization culture maintains internal order is through the exploitation of self-colonization. With the advent of language, and hence the ability to propagandize through control of the education systems and media, we can effectively allow groups to colonize themselves, to force their members to conform or be socially, politically, legally and/or economically ostracized. At this level it is no longer land that is the battleground of colonization, it is the real estate of the mind.

Despite my liberal upbringing, and being encouraged to think for myself, I was co-opted early (though uneasily) into participating as part of the political, social, legal, educational, technological, business and economic systems of my colony of civilization. It was not “the government” that co-opted me, not some conspiratorial clique or elite. It was the people all around me, the people in the groups I was born into and accepted myself as part of. I really believed that we had to work “within the system” to bring about change. I really believed that the forces that are leading our world to economic, energy and ecological collapse, could be reformed, changed, fixed, and that “together we could do anything”. I really believed that I, as a part of some imaginary “we”, could save the world. Everyone told me so. Everyone told me, when I was overcome by the darkness of depression, that I needed to pull myself out of it and get back to my responsibility to my communities, my society. There was a clear though tacit communication that if I were too radical, if I did not conform, or if I did not live up to my responsibilities, and let down the groups to which I accepted I belonged to, there would be dire consequences.

For the most part, this relentless peer pressure “to be part of the solution”, to accept responsibility, to work hard, to perpetrate all the nonsense about how this was the only viable way to live, was and is well-intentioned. My family and friends and co-workers and neighbours and the other people in my communities genuinely wanted me to succeed, to be happy, to be a part of them. I just needed to accept the terms of doing so. Self-colonization. Seven billion of us, all believing and doing what we’re told. Not by The Man. By the people we love, and trust. For our own good. Trust us, we know what’s best for you. You’ll never be able to get along with people, or get anything useful accomplished, if you think/talk/act like that. Get with the program.

So as I have had the opportunity to become more radical, as I have moved further and further to the edge, I have had to fight self-colonization every step of the way. When I acknowledged on this blog, after reading John Gray’s Straw Dogs, that I no longer believed it was possible to save our civilization, and that I now believed that civilization would collapse in this century, the fallout was enormous. I was labeled a “doomer” and much worse. Many readers assailed me for having “let us all down”. My readership is a fraction of what it was when I was spouting forth about the importance of knowledge management and the process of innovation and extolling happy green ideas. Each move further to the edge has been harder, and led to more push-back, expressions of anger and disappointment, pleas to “come to my senses”, and even threats. Poly, veganism, doing nothing. How dare I? Such sacrilegious talk is too radical, defeatist, “anti-social”. Even harder to take, my arguments are assailed as intellectually flawed, idealistic babble, positions that “wouldn’t survive logical scrutiny”. I was condemned as “unhelpful”. I was told what I was saying was just wrong. Dangerous to the integrity, energy and productivity of the group.  I must be tempered, brought back into the fold, or shunned.

This is where the Borg metaphor fails. The most powerful and persuasive propaganda, the most debilitating constraint, the most compelling and dangerous instruction — comes not from the top or the centre. It comes from our peers.

And finally there is personal colonization, that works integrally with the other three forms. It is the most insidious of all, because it is entirely within us. It is a part of who we are. It is the accumulation of gunk that we have acquired over a lifetime of accepting what we’ve been told, and wanted to believe. It is the self-inflicted propaganda of our own stories about who we are, about our place, about our popularity and loveability and where we belong. It is the terrible fear of being alone. It is the little voice that says “If so many people believe X, and I seemingly alone believe Y, how could I possibly be right?” Of course this is the same voice that allowed Germans to do nothing to stop Hitler’s atrocities. It is the same voice that allowed Stalin to kill 80 million and Mao 60 million. But it is a voice with power.

The four forms of colonization have made our civilization culture, for better and for worse, what it is. They have made it possible, and unsustainable.

And, until it blows apart, unstoppable.

13 Responses to Colonization, from Without and from Within