Climbing a Dark Mountain, and Thoughts on a New Culture 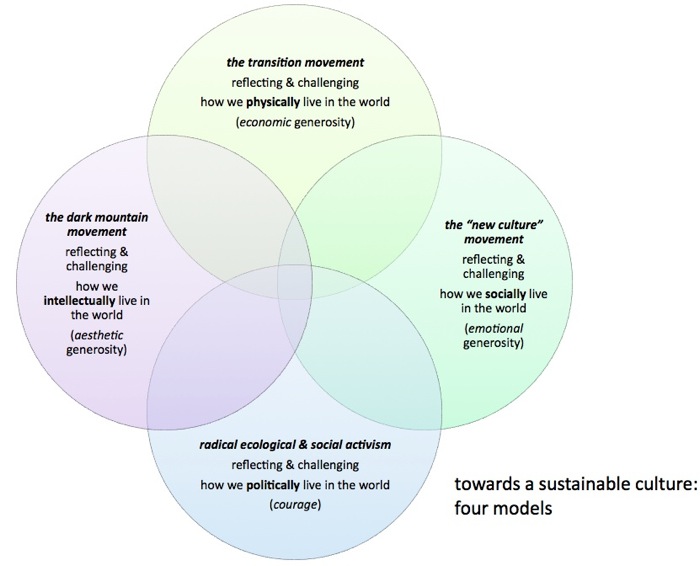 I‘ve recently finished reading Dark Mountain issue 1, the first publication of the global artists’ collective of the same name, of which I am a member. It’s an astonishing collection (work of 37 different authors) of appreciation and reflection on our civilization’s beginning collapse, and I recommend it without hesitation to anyone who has reached the point of understanding that our unsustainable civilization culture can’t be saved, and is trying to cope with that terrible knowledge. I am working on a submission (a work of fiction, I think) for issue 2.

And if you haven’t yet read the Dark Mountain Manifesto, which started the whole project, please, please do so.

The book begins with a wonderful poem by Rob Lewis that explains the purpose of the whole project: To encourage and enable artists to add their perspective and voice to the scientists and activists and transitioners and new-culture pioneers proclaiming our civilization mad, unsustainable and suicidal, and looking for a better way. “Meanwhile, poor scientist holds extinction | in a palm full of numbers | with nothing but data to howl with.” The artist’s role, indeed responsibility, we assert, is not only to speak out, but to do no work that does not either (a) hold a mirror to our crumbling civilization and show it as it really is (not as the corporatists, technophiles and media portray it), or (b) help us imagine a better culture, a better way to live, now or after civilization’s fall. This work is what founders and editors Paul Kingsnorth and Dougald Hine call “finding the new stories.”

John Michael Greer’s submission to the book is a remarkable review of Robinson Jeffers’ prescient poetry and a re-cap of the environmental ‘movements’ three stages: from recreational through sentimental to apocalyptic environmentalism, all of which have fallen victim to our propensity for anthropocentrism and seeing ourselves as apart from “the environment.” Whereas climate change is a narrative on human power, he explains, peak oil is a narrative on human limitation, and hence is embarrassing to us and gets much less attention in the media, even though it will, along with economic collapse due to “peak debt”, almost certainly stagger our civilization culture well before climate change delivers the final blows.

Louis Jenkins’ lovely poem Wrong Turn begins “You missed your turn two miles back because you weren’t paying attention, daydreaming, so now you have decided to turn here, on the wrong road”, and ends “You are going to have to follow this road to whatever nowhere it leads to.” A great example of the work of holding the mirror to our civilization culture that Dark Mountain is all about.

Paul Kingsnorth’s essay confesses “I don’t have any answers, if by answers we mean political systems, better machines, means of engineering some grand shift in consciousness… What am I to do with feelings like this? Useless feelings in a world in which everything must be made useful… Feelings like this provide no “solutions”… But this is fine; the dismissal, the platitudes, the brusque moving-on of the grown-ups. It’s all fine. I withdraw, you see… I withdraw from the arguing and the talked-up necessity and all of the false assumptions. I withdraw from the words. I am leaving.” The job of the artist is not debate, but truth and imagination. There are others better suited to the debating. If there is still any purpose to debating at all.

The book includes an illuminating discussion that Anthony McCann had with Derrick Jensen, in which Jensen explains the need for a culture of resistance that recognizes that we cannot battle civilization culture on its terms (i.e. through voting, choices of consumption etc.) but rather on our own — what do we really want and how do we get there, who is the enemy, what do we have to do, and what’s stopping us?

Ran Prieur chimes in with a review of the history of previous civilizations, a refutation of the “noble savage” myth, and this insightful statement: “I think the root of civilization, and a major source of human ‘evil’, is simply that we became clever enough to extend our power beyond our empathy.” Our brains evolved, fortunately, to give us the ingenuity to adapt to and survive the ice ages, but such brains are also capable of inventing technologies, and hence weapons, prisons, and empires (all hallmarks of civilizations). This is the point John Gray makes in Straw Dogs. We cannot be other than who we are. Evolution is slow, and the sixth great extinction, which we have unwittingly unleashed, is proceeding at lightning speed.

There is much more, including a beautifully-crafted essay on the history of colonialism by Jay Griffiths, but this will give you an idea of what the book is about.

The non-fictional works in the book succeed, I think (and perhaps necessarily so at this early stage) more than most of the poetry, graphic art, and fictional works. I am impatient for issue 2 of Dark Mountain, which I hope will be much braver, more creative and edgier, without losing the coherence of the essential messages: Pay attention. This is how the world really is, right now. Learn. Prepare yourself and help prepare those you love, especially the young. Become resilient. Be generous. Imagine a better way to live, and experiment now with such imaginings, so that when civilization falls the survivors will have some useful models to go on with.

Last month I spent nine days at a “new culture” event, which I will tell you much more about in an upcoming post. The event was focused on personal growth and healing in community, self-sufficiently. It got me thinking about how different ‘movements’ are developing different models to cope with the beginnings of civilization’s collapse, but doing so in a completely uncoordinated and largely disconnected manner. I sketched out the diagram I’ve shown above of four such movements and the models they are pursuing:

I’ve drawn these four movements/models as overlapping because, obviously, they are connected: The Gift Economy and Joanna Macy’s Work That Reconnects, for example, are rooted in the New Culture Movement but focus as well on what we can do as activists, and aspects of both Gift Economy and Work That Reconnects are taught as part of Transition Movement training programs. All four movements are also essentially community-based, bottom-up, focused on the local, the land and people and ecosystems of the specific place we love.

What is disconcerting is that there is relatively little awareness among those in the four movements of what the others are doing, and the possible synergies between the models. At the recent New Culture event I attended, for example, almost no one had even heard of the Transition Movement, and none had heard of Dark Mountain. Although most of us will be better suited to work in one or two of these Movements than the others, I believe it’s essential to build better bridges and connections between them, so that we can help and learn from each other.

Since I’ve read and written about Straw Dogs, and acknowledged that I believe very strongly that our civilization is in its final century, I often get asked why I still bother to write about these movements and models, or about anything at all for that matter. How, people ask me, can I live, and go on, knowing and believing that a horrific collapse is imminent (at least within my grandchildren’s lifetimes) and inevitable?

I guess my answer is that I can’t do anything else but go on. It is in my nature as a human being to do what I must, to focus on the needs (mine and of those I love) of the moment, to do what I do well, what I care about, and what I believe needs to be done. This is what all creatures, I think, do, even when they know, in their hearts, and deep in the calcium of their bones, that it will all, sooner or later, be undone. Life is joyful, and I feel a deep responsibility to future generations and to all-life-on-Earth to do what I can to learn and tell the truth, to mitigate the growing desolation of the Earth that, by my actions and inaction, I am complicit in, and to imagine and convey, as best as I can, how we might have done better, and how we might do better in the future, if we are blessed with the chance.

I think that’s best done cooperatively, collaboratively. That’s why I’m part of the Dark Mountain collective and the Transition Movement. That’s who I am, I guess, now; and what I do.

13 Responses to Climbing a Dark Mountain, and Thoughts on a New Culture