Too Smart For Our Own Good 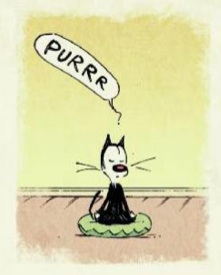 Last month I linked to an excellent CBC video summarizing the life, work and philosophy of uber-celebrity Eckhart Tolle. Tolle doesn’t really say anything new in his books — I think Richard Moss’ Mandala of Being delivers the same “learn to be Present” message more effectively, and the bookstore shelves are crammed with meditation, spirituality and self-help books claiming to be able to teach you how to do this.

I confess that none of these books ‘works’ for me, though I continue to strive, through a variety of daily practices, to learn to be Present.

What intrigued me about Tolle’s horribly-named A New Earth is that in it he hints at how we humans came to be so un-Present and why it seems so hard for most of us to re-learn Presence.

In both his best-sellers, he tells the story of two ducks:

“After two ducks get into a fight, which never lasts long, they will separate and float off in opposite directions. Then each duck will flap its wings vigorously a few times, thus releasing the surplus energy that built up during the fight. After they flap their wings, they float along peacefully, as if nothing had ever happened. If the duck had a human mind, it would keep the fight alive, by thinking, by story-making…[even] years later… [Imagine] how problematic the duck’s life would be if it had a human mind. But this is how most humans live all the time.”

Tolle, unlike most writers on Presence, seems willing to credit most non-human animals with the “intelligence” to live (almost always) in the Present, in the Now, except for brief moments of stress. In the model below, which I have developed to attempt to illustrate Tolle’s thesis, wild creatures and human beings who have re-learned presence live the conscious, integral life shown on the right side. For such creatures, the triggers that cause suffering for most humans just bounce off; they fail to have any enduring impact. The spirit remains integral, unruffled and unpolluted. 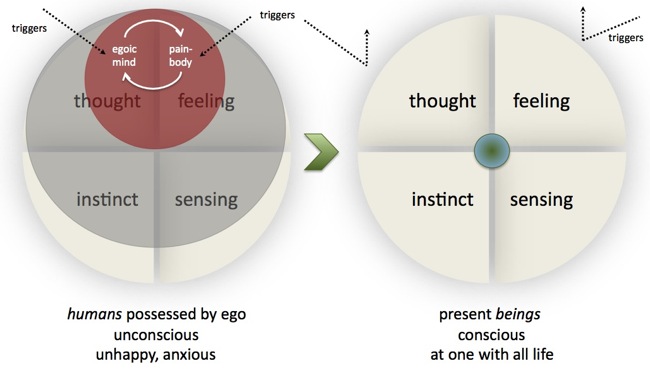 By contrast, most humans live in the unhappy, anxious state shown in the left side. For them, triggers produce a vicious cycle of negative thoughts and “stories” (the “egoic mind”) and negative emotions (the “pain-body”). The stories we tell ourselves about the past, the future, ourselves and others are fictions, but our insatiable human egos grab onto them, and these thoughts trigger emotions like anger, fear, jealousy, hatred, self-hatred, shame, and anxiety, which fester in us and cause our egoic minds to invent even more stories to justify and perpetuate the pain-body negative emotions. Both the egoic mind and the pain-body are easily triggered by negative events (real or imagined) — in fact Tolle thinks they are addicted to them. The ego even casts a shadow over our sensory and instinctive lives, which the egoic mind cannot control and therefore does not trust. We therefore become “possessed” by our egos, which are not us. Our egos would have us believe that our thoughts and beliefs and feelings are “us”, when in fact all along we are really the consciousness that lies behind those thoughts, beliefs and feelings. Presence, then, is developing the capacity to push out and free ourselves from our egos and the negative thoughts and emotions that “normally” possess us, that we “normally” identify with.

Implicit in this model is the intriguing idea that, at some point in our evolution (and perhaps also in the evolution of other large-brained creatures like chimps, whales, elephants and ravens), we became too smart for our own good. Our brains, which were evolved by our bodily organs as a feature-detection, non-urgent decision-making and navigation system for their benefit, at some point passed the tipping point at which they developed ego. This is not the same as consciousness — indeed there is a mountain of evidence now that most creatures possess consciousness. Ego would appear to be an unintended and unfortunate consequence of the development of the brain to the point where it began to mistake its processing of thought and feelings for our consciousness, and we have been in a fight with our egos ever since. Whereas most Present creatures handle stress instinctively, and let it go quickly like the ducks in Tolle’s story, we “too smart for our own good” creatures have become consumed by, perhaps even addicted to, stress, and our egos, ever ready to cycle viciously through negative thoughts and stories and feelings whenever stress hits us, absolutely feed on it, to the point they possess us and we become unconscious of what is real, traumatized and trapped in and by our minds and feelings.

In this hellish unconsciousness, we crave attention and appreciation and adrenaline, anything that will give us temporary respite from our egos’ stories and the wrenching emotions that feed them and feed off them. This drives most human behaviours, which is why our species has become, through its inventions of civilization, dysfunctional, disconnected, massively destructive, and unsustainable.

Having explained this, Tolle then takes us through a variety of practices to relearn Presence. Most of them are familiar and, for most of us, I suspect, inaccessible and unhelpful:

All easier said than done, and mostly said better by others. I was intrigued that this list resonated quite strongly with my recently published list of Six Principles (be generous; value your time and its passage; live naturally; self-accept; practice being present; let go of stories). I suspect this might have something to do with the fact that Tolle and I have both spent much of our lives oppressed by anxiety and depression.

None of this is particularly new advice, either: The ancient Upanishad wisdom reiterated in Eliot’s Four Quartets put it more succinctly — datta, dayadhvam, damyata — give, empathize, exercise self-control.

Tolle seems to dismiss the human propensity for daydreaming and fantasizing (including, I would presume, activities in virtual worlds like Second Life), and even “falling in love” as forms of unhealthy, “compulsive”, addictive behaviour. He prescribes breathing and other “awareness” exercises as a means to learn to stop such behaviour from “tricking” you into continuing your compulsion, and learning to stop trying to justify it. This seems outrageously dismissive to me: artists, writers, players, lovers, creators, and other imaginers of possibilities may be “addicted” to their (our) recreations, but I see this as no more harmful or “unconscious” than our addiction to eating or sleeping. And a world of Presence without imagination would be, I think, a poorer one.

In the latter parts of A New Earth Tolle becomes, I think, a little carried away with the power of Presence. He appears to claim it can cure depression, anxiety disorders, addictions and lifelong traumas. While I’d acknowledge that stress (which is everywhere in our modern society, and that is no ‘story’) is only the trigger for many of our modern illnesses, not the cause, I think it’s arrogant and even cruel to encourage people to believe that these illnesses can be extinguished by what is in essence a mental trick.

Tolle also believes that millions of people are now re-learning to be Present and potentially ushering in a new era of global consciousness (hence the title of the book); I think this is a hyperbolic delusion, and the type of magical thinking that is the last thing we need as we begin to cope with the collapse of our civilization.

But the idea that we have become, as an accident of evolution, too smart for our own good is an intriguing one. If only the remedy for that — thinking less and being more — did not require more intelligence than most of us may ever hope to possess.

(Cartoon by Patrick McDonnell of ‘Mutts’ fame, from Guardians of Being, co-written with Tolle)

12 Responses to Too Smart For Our Own Good