An Existential Approach to Bringing About Change 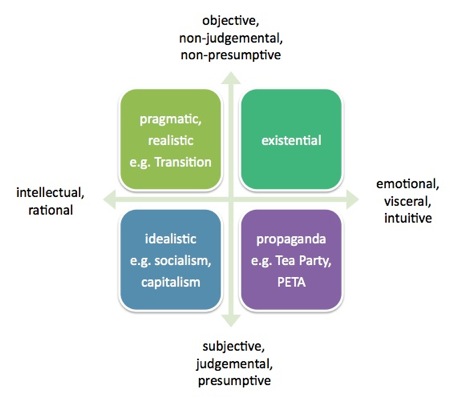 I have recently been talking with fellow Bowen Islander John Dumbrille about the various change initiatives being supported on Bowen, such as Bowen in Transition and its Visioning exercise, the launch of Belterra, the first co-housing and intentional community initiative on Bowen, and the recent proposal to convert half of the island into a special kind of National Park.

I spent most of my adult life working on various programs that were intended to bring about some kind of desired change: more effective work, more successful organizations, self-improvement of one form or another, increased knowledge, understanding, skill or capacity, a more sustainable world. In retrospect, I don’t believe any of them accomplished much. As I noted in a recent post, the six dominant trends of the past forty years have all been negative and all occurred despite massive amounts of energy, effort and enthusiasm to achieve the opposite objectives.

I have been focusing much of my energy and writing of late on the Transition, Unschooling and Communities movements, because I believe what they stand for. Rather than being change initiatives, all three of these are alternative movements; they represent a walking away from the traditional way of doing things (and an attempt to create a new way of doing them) rather than an attempt to reform current processes and institutions. All three of them embrace all three of the Dana Meadows’ top three ways to intervene in a system. For example, unschooling suggests that the way to optimize learning is by enabling people to learn what they want when they need it in the real world, rather than “teaching” them a standard curriculum in a separated institution. Transition’s objective isn’t to make the current culture sustainable, but rather to transition to a very different culture. And intentional communities are local, self-organized and self-managed, and operate on consensus, the antithesis of the top-down, competitive, “representative”, “we’ll do it for you” political systems most of us live with and try in vain to make better.

So it seemed to me such movements should have the right “stuff” to succeed, if Meadows was right. Yet my instincts tell me that the struggle these movements are having to gain traction beyond a small, informed and eager group of people, is an indication that something is wrong with them. At first I thought this was just that it would take people time to appreciate these alternative models of a better way to live. And that perhaps they would not get the momentum to scale up to widespread popularity and implementation until crises got bad enough that people had no choice but to look for better alternatives — that there is as yet no “burning platform”, as businesspeople put it.

But even before speaking with John I had this nagging sense that these movements were flawed in some other way I couldn’t quite fathom. What accounts for the success of a few large-scale change movements (ending slavery, improving the status of women, reducing tobacco addiction and drunk driving) and the failure of almost all others?

John had a suggestion for how to approach the movements I cared about, that also provided an explanation for the success and failure of other movements. His suggestion was to appeal to potential converts at an existential (visceral and emotional) level, rather than a pragmatic and rational one. So to appeal to potential Transition movement members, for example, instead of asking people the practical question “How can we make the transition to a post-cheap-oil, post-stable-climate, post-industrial-economy society?” we should perhaps be asking the existential question “What does it mean to live a good life?”

Asking such questions in a way that is non-presumptive and non-judgemental is, in my experience, almost unheard-of, except perhaps in Buddhist circles. Many movements attempt to prey on human emotions (the US Tea Party being a stellar example, but  many anti-poverty and animal welfare movements use similar tactics). But what movement has ever stepped back from judgement and ideology and attempted to recruit people by appealing to their ability to ask themselves questions about what it means to be human and to be of use, and to be an integral part of all-life-on-Earth?

I’ve tried to illustrate this in the diagram above. The traditional idealistic approaches that political movements have used for centuries (lower left) have fallen victim to the same failings as all ideologies — they are too inflexible in their thinking (“the market will solve all our problems”) and too blind to complex realities to accommodate how the world really works. There have been two reactions to this failure: employing propaganda (“if they won’t buy the logic of our argument, prey on their emotions instead”) (lower right), and its opposite, pragmatic realism (like what the Transition movement has done to transcend ideology by focusing on disaster-preparation and resilience-building, without playing the blame game)(upper left quadrant).

What almost no one seems to have tried is the existential approach (upper right quadrant) — neither ideological nor dispassionate, but politically transcendent, appealing neither to the emotionally-neutral intellect nor to thought-driven emotions like fear, anger and hatred, but instead to the higher emotions — our feelings of connection and belonging to something greater than all of us.

The reason this hasn’t been tried, I suspect, is that it’s too hard — it’s much easier to appeal to ideology, idealism, pragmatism, or raw emotion.

So how might it work? Let’s stick with the Transition movement as an example. At the moment, a lot of people have never heard of this movement, or say they don’t “get” it. It has successfully transcended politics in its pragmatism, and has attempted to deal with the grief of many people about the damage we have done to our environment (it has an integral “heart and soul” component) but it now appears to be stalled. There are lots of working groups in communities around the world that have done visioning exercises and developed local plans for renewable energy, transportation that is not oil-dependent, conservation, disaster preparation, local currencies and other worthy projects. But now what? Until some of the dominoes fall and there is a great sense of urgency, or no alternative, the conditions do not seem right (and human nature is not currently disposed) to implement these ideas.

If Transition were to take an existential approach, it would begin with an existential question such as “What does it mean to live a good life?” and help each individual to become informed about what is really happening in the world (issues like peak oil, climate change and the economic crisis), not for the purposes of planning how to cope with these issues, but for the purpose of deciding how one should holistically respond to this knowledge, from the perspective of increasing the well-being and health of all-life-on-Earth now and indefinitely into the future.

This is less an intellectual exercise than an emotional, physical, sensual and intuitive one. It is not about responding to facts with rational plans, but instead responding to emergent understanding with appreciation and a connected holistic “knowing” (intellectual, emotional, physical, chemical, sensory, and intuitive knowledge, integrated) of what is, what is needed, and what must be done. When Derrick Jensen writes (to many, cryptically) “Stand still and listen to the land, and in time you will know just what to do”, he is, I think, speaking of this kind of holistic “knowing”.

What is needed to allow such an existential approach to work, however, is a rebuilding of our personal capacity for such “knowing”. That entails relearning how to listen to and trust our instincts, how to become present and to silence our egos (which are busy telling us fictional stories and whipping up our baser emotions until we become mentally incapacitated), and how, as groups, to collect and share information, ideas, and perspectives non-judgementally and process this into holistic and collective knowledge. This rebuilt capacity may then let us “know just what to do”, and move us to pursue consequent collaborative effort that is joyous, sustained, heart-felt, and inexhaustible.

In short, we need to become more functional, healthy, connected individuals first, before we can hope to be part of any viable and sustainable change process.

So how do we do that?

I think self-directed learning programs that combine capacity-building with useful information would be a useful strategy. I’m not a fan of training programs because they’re one-size-fits-all when one size fits none. But we don’t have a framework for self-directed learning the way we have for formal education. From the work that’s been done by unschoolers, we might guess what such a framework might look like:

In my case, what I think I need to learn to be able to contribute effectively and usefully to making this world a better place is (a) generosity (including empathy and active listening), (b) living naturally, (c) self-acceptance, (d) presence, and (e) letting go. These are capacities more than skills, but acquiring these capacities requires practice as much as acquiring skills does. This is all I think I would need to be able to bring an existential appreciation to the issues and projects I care about, to know, in consort with others with comparable capacities, “just what to do”.

There is of course lots of knowledge I will probably need to actually do what I discover I must do, but I think I have the knowledge of how the world really works to be able to obtain the appreciation of “what to do”. Many people, I believe, need to acquire more knowledge of how the economic system works (and what happens when it doesn’t), and what the possible effects of peak oil and climate change will be. Acquiring that additional knowledge should be part of their personal self-directed learning program, their preparedness for knowing “just what to do”.

The way to launch such an approach, I think, is to start by inviting people to come together (perhaps in Open Space) to:

This will not be an easy invitation to craft. It asks a lot of people.

When these people are brought together it should be with the intention of reconvening them when they self-assess that they have acquired what they need. So it should include an open invitation: Tell us (all of us — this is a self-organized program) when you’re ready.

And then, when they’re (we’re) ready, we can reconvene and start to ask the existential questions together about what makes a good life, what does if mean to be human, to be of use, and to be an integral part of all-life-on-Earth, and, together, what do we now “know” we must do. We won’t need to assign tasks or set up working groups. It will be, individually and collectively, obvious what the answers to these existential questions are and what that means we must do, as individuals and collectively.

I have no idea whether these “things we must do” will be showing people working models of different ways to live, or blowing things up, or healing suffering, or just waiting in a way that does minimal harm and conveys a deep and genrous love. But we will know just what to do. Right now, most of us do not.

And that is why, I think, all the well-intentioned things we are doing now are not working. It’s not that the world is not ready, that things aren’t “bad enough”. We are not ready. We have much to learn before we will be.

Given that this existential approach is so much more difficult than other approaches, can there possibly be enough of us to make a difference using this approach? That’s another great existential question. When we’re ready, we’ll know.

(thanks to John, and to Paul Heft, for helping me think this post through)

32 Responses to An Existential Approach to Bringing About Change