Why the Metamovement Will Ultimately Fail 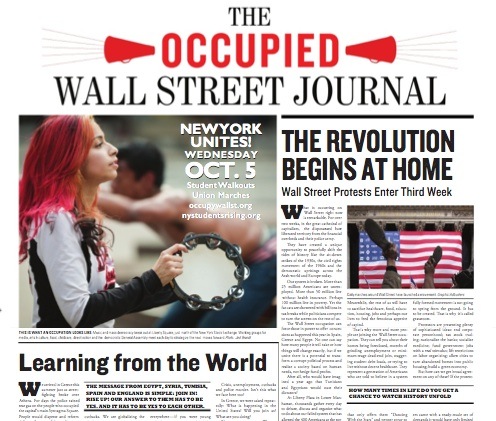 There have been, belatedly, attempts to connect the “We Are the 99%” Occupy Wall Street protests with the protests in the Mideast against anti-democratic regimes and in Europe against unemployment, austerity and government inaction. What is unique about the newest US protests (at least since the ill-fated anti-globalization protests of a decade ago), and perhaps the reason why it took so long for them to get media and public traction, is that they are anti-corporate more than anti-government.

Umair Haque, an economics writer (best known for his explanation of the phenomenon of Peer Production) I have written about on this blog over the years, and now a writer for HBR, has recently labelled these protests with the collective term the Metamovement. In his essay he says:

The common thread behind each and every movement in the Metamovement… [is] a sense of grievous injustice, not merely at rich getting richer, but at the loss of human agency and sovereignty over their own fates that is the deeper human price. In other words, it’s not just about inequality–but the deeper failure of institutions…

The deeper thread that runs through [these protests is] one not merely of loss of financial prosperity, but of the paring back of dignity, of the evisceration of agency, of the disappearance of that which might be said to be essential to the experience of being human…

Not every revolt ends in revolution–but every revolution begins in revolt. And make no mistake–this is revolt; insurrection against a monstrous, barbaric status quo that’s failed too many, too deserving, for too long–while serving too few, too undeserving, far too well. It is not in the nature of man or beast to stay yoked to the gleaming machines of their own economic, social, and moral annihilation.

The Metamovement is in essence a revolt against disempowerment, and, while government is the favourite whipping-boy, there is a growing awareness that globalization has led to corpocracy — concentration of power in the hands of the wealthy multinational business owners, who buy and sell politicians at will and hence control the laws, the regulations, law enforcement and other political decisions including when and with whom we go to war. Loathing government has always been popular and acceptable in North America (which is why most elections are about which party is hated more). Loathing big corrupt anti-democratic corporations is new, and unsettling to the corporatists and the mainstream media they own. It’s OK to howl at the puppets, but not at the puppet-masters.

As Jeff Wells explains, there is an overwhelming and global sense that the rest of us don’t matter any more in our globalized industrialized society, except as passive consumers of products. We are not needed or wanted any more for our ideas, for our viewpoints, for our knowledge and skills, for our approval at the voting booth, or even for our physical labour; the corpocracy would prefer that we just borrow more and spend more, endlessly, quietly, and uncritically, until we die.

The metamovement is short on coherence of demands (and hence was and still is dismissed as aimless and anarchic by media and politicians alike) because there is a growing sense that what is needed is not for those in power to do something different, but for those in power to cede that power back to individuals and community, and leave it up to those individuals and communities to decide on what, in their particular situations, should be done with that power.

And, as consultant-philosopher Charles Handy has pointed out in a warning to political, economic and social idealists, nobody gives up power voluntarily. This is the greatest challenge to the Metamovement, as the people of Syria, Libya and Yemen know all too well.

What makes the situation even more complex is that there is no coherent consensus among the various facets of the Metamovement on who should be ceding power, or how. In the Mideast the target is corrupt totalitarian governments, but who their power should pass to is far from unanimous, and that makes a lot of people nervous, especially those who’ve seen who has risen to fill the power vacuum in other countries.

Neither the target nor the goal of the Metamovement is clear in North America or much of Europe. To some extent the protesters are not for anything — their solidarity is in opposition, not in intention. The left-libertarians of Occupy Wall Street are opposed to global corporatism, and want it dismantled to re-empower individuals and communities (as one writer put it “We don’t want to overthrow the government, we just want it back.”). The right-libertarians of the Tea Party are opposed to government and government regulations (including regulation of corporatists), and want government dismantled through deregulation in order to — you guessed it — re-empower individuals and communities. Both believe the other is fraudulent, misguided and dangerous, but both are expressing, from their worldview and with the knowledge available to them, anger and outrage over our growing loss of dignity, disempowerment and even irrelevance to the global monoculture corporatist society in which we all live.

Meanwhile a large part of the populace, especially many young people, have pretty well given up on the possibility of any power shift occurring. Some of them think the Metamovement is ridiculous; most of them, I suspect, don’t know and/or don’t care about it. The billions around the world who have opted out of all active engagement with the political and economic system (other than continuing to support it with their purchases, their passivity and their resignation), are the real 99%.

So where is this Metamovement going? When there are no cohesive goals, demands, or measures of success, can the Metamovement ‘succeed’?

The real purpose of the Metamovement, at least in North America and perhaps Europe, is not to get the corrupt political and economic corporatist 1% to cede power, or to reform itself, or to compel political leaders to dismantle it or tax it fairly or reform it on threat of replacing them with leaders who will. Only the hapless Tea Party faction of the Metamovement is naive enough to believe that can or will happen.

The real purpose of the Metamovement, I would argue, is to re-engage the 99%, from the bottom up, community by community around the world, first to learn how things really work and what is really going on, and then to decide what actions need to be taken in response. In every nation and community the situation is different and the response that is needed will inevitably be different.

The purpose of the Metamovement is education and then organization. That means countering the official propaganda and refusing to support, with complacency, with tax dollars, with consumer dollars, with obedient wage-slave labour, or with the acceptance of crushing debt, the existing political and economic systems that are currently run for the benefit of the corporatists. It means curing the epidemic of anomie that has infected so many of us, everywhere. It’s a hugely ambitious goal.

In much of the Mideast that means for the moment deposing despots, and then struggling to avoid allowing either other ideologues or global corporatists to fill the power void. In North America and Europe that probably means both starving the system (by refusing to support it politically or economically), and smartly and strategically sabotaging it (where it is weakest) — blocking it, breaking it, or taking it at every turn, without causing suffering and without getting caught (at least until we are far enough along as a popular movement that the enforcement authorities will refuse to arrest us, and will instead join us).

This is and always has been the dream of revolutionaries. It has succeeded, sometimes, in the past, and it may succeed again, in some places and situations at least, for a while.

But look at where we stand now, the larger picture. Real democracy is, for all our efforts, rare in the world, and power inequality is staggering, growing by leaps and bounds, and almost unprecedented in human history. And we are headed towards a series of catastrophic and cascading energy, ecological and economic crises and no one is in control — no one, not the 99%, not the 1%, has the power to avert them. We have unleashed the sixth great extinction of life on Earth and it’s been accelerating unimpeded for thirty thousand years. We have created a political and economic industrial growth civilization monoculture that is unsustainable, out of control and unstoppable.

This is part of the learning that the Metamovement will have to internalize, relate to the local situation in every community, and decide how to act upon. So, of course we need a Metamovement to work to restore the balance of power in our political and economic systems, and to restore dignity and purpose to our lives. But such a movement will take a long time, will be fiercely opposed by powerful interests, will entail huge risks, and will have to play out across a backdrop of growing crises, the imminent train wreck of our global industrial growth civilization, for which we must all share the blame.

My sense is that, in the short run, the situation is simply not bad enough in most of the affluent nations of the world to engage sufficiently large numbers of people to learn and commit to what is needed and stick with it long enough to achieve the power change the Metamovement will discover is required to achieve their ends.

And every failure, like the recent failure of the anti-pipeline demonstrations in Washington DC (despite evidence of unethical and possibly illegal activities by both US and Canadian governments and regulators working with Big Oil), will only serve to demoralize the Metamovement and sap its energy.

And in the longer run, I believe that the massive and chronic crises we will all be facing will consume so much of our time and attention that the Metamovement will fall by the wayside.

In the meantime, I applaud the Metamovement and its hard-working members, especially those who are informed and not naive about what is really going on. I hope they succeed. I fear they cannot.

24 Responses to Why the Metamovement Will Ultimately Fail