Who ‘We’ Are, Part Three: Our Behaviours Drive Our Beliefs 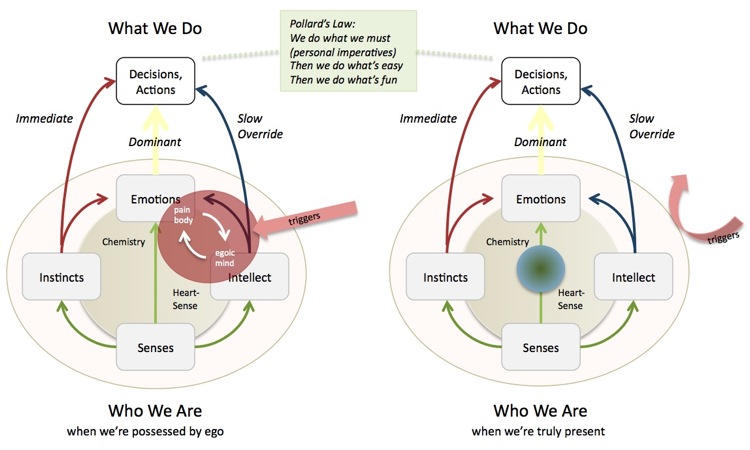 A quick re-cap of the hypothesis I laid out in parts one and two of Who ‘We’ Are:

As I concluded in part two, now that our civilization culture has (as an unintended consequence of its evolution) desolated the Earth, and has begun to collapse, we are left to wonder what will be left of ‘us’, and some of us who believe that culture cannot be ‘saved’ have started to try to liberate ourselves from civilization culture, and our dependence on it, now. I wrote:

This does not mean moving to neo-survival mode, but rather moving away from civilization culture’s broken, desperate, coercive survival mode. Moving from a society whose worldview is one of scarcity, competition, obedience and sacrifice, to one whose worldview is one of abundance, cooperation, independence and generosity. Moving forward to a natural society. One that trusts the wisdom of each individual’s cells, organs, instincts, senses, emotions, intellect, biophilia, to know just what to do, and to act on that holistic wisdom. One that through its connection to all-life-on-Earth intuitively and collectively and wordlessly manages its numbers and behaviour (as most complex natural species do) to contribute to, not destroy, the complexity and diversity of life on our planet. In our cells, in our organs, in our DNA, this is who we are, and who we always have been, except for a few desperate millennia, when we forgot.

In my postscript I mentioned that we can use music and other sensuous stimuli, and love, and perhaps ‘mind-full’ activities such as meditation, gardening etc., to at least temporarily cut through the egoic mind and pain-body that has made us all mentally ill and begin again to function as natural creatures, aware and relaxed, present and at peace, as in the diagram in the upper right. There are many other things we can do as well to liberate ourselves from our crumbling civilization culture:

A new thought: The two diagrams above both imply that it is our ‘beliefs’ (what we know or think we know) that drive our behaviours, our actions. I’m now in the process of reading David McRaney’s You Are Not So Smart, and in this book he argues that it is the opposite: our actions and behaviours inform and determine our beliefs.

What actually happens in our minds, he writes, is that we act first, and then rationalize and self-justify our actions. Our minds don’t ‘decide’ at all. The decision is made for us by our cells and organs, or by our culture, whichever has the upper hand in the moment (or perhaps a mix of both, which can make our behaviour confusing and inconsistent). Whichever has the upper hand is determined by how susceptible we are to (or skeptical we are of) the messages of our culture, and how we understand those messages; by how powerful and clear and trusted the messages our senses and intuition send us are; by how much information we have and how unambiguous that information is; and most of all by which has most influence over the chemicals that are rushing through our bodies in the moment: our cells and organs or the pain-body our culture is triggering in us. ‘We’ have nothing to do with it.

This does not require that the arrows in the models depicted above need to be reversed. Who ‘we’ are is not our beliefs or our worldviews. What the models need, to reflect that our behaviours and actions drive our beliefs, is an additional ‘feedback’ arrow from the Decisions and Actions box back to the Intellect box. On the right side, this might be called ‘learning and modelling of reality’. On the left side, it is these things too, but also ‘rationalization and justification’, because when we’re afflicted with egoic mind and pain-body, without rationalization and justification for actions that otherwise make no sense, we cannot live with our ‘selves’.

Why is it important (at least to me) to have some kind of explanation for who ‘we’ are, some model that makes sense of how and what we think and feel and believe and do? I believe self-knowledge is one of the most important and difficult to achieve of the essential capacities we need to acquire to be ready to cope with the challenges we face in the years ahead. I believe our civilization’s collapse has already begun, that it is irreversible and will bring with it an enormous amount of suffering (not that our world isn’t already filled with suffering). How can we hope to be able to deal with the cascading crises of economic, energy and ecological crises likely to roll over us in the Long Emergency decades of this century, if we don’t know ourselves, and our motivations, and if we’re not sufficiently self-aware and present and at peace with ourselves to competently self-manage, deal with crisis, and create healthy, sustainable communities in the aftermath of civilization’s collapse?

I hope this is a useful, or at least interesting, model of ‘self’ for you to think about as you work on building your personal capacities for resilience and your own projects to find better ways to live, now and for the generations to come.