How Many Circles Does it Take to Make a Community? Last evening I spent a couple of hours with three of my Bowen In Transition colleagues — Don Marshall, Rob Cairns and Robert Ballantyne — discussing what, if anything, we might do to start preparing our community (Bowen Island, off Vancouver BC, population 3800, area 20 sq. mi.) for the economic, energy and ecological crises — and perhaps even collapse — we expect to see in the coming decades.

Bowen in Transition, like many global Transition Initiative communities, is already doing several short-term small-step activities — learning about and (at a personal level) applying permaculture principles, obtaining and acting upon home energy audits, compiling a list of local experts in sustainable food, energy, building etc., holding awareness events etc. But as I noted in my recent Preparing for the Unimaginable post, I am concerned that we need to start thinking about longer-term, larger-scale, community-wide changes if we want to have a community sufficiently competent, self-sufficient and resilient enough to sustain ourselves through major and enduring crises.

I have read some of the “energy descent plans” of some of the leading Transition communities, and they strike me as being long on ideals and objectives and short on credible strategy — how to get there from here. And while my original thought was to draft a “Transition and Resilience Plan” that would include current-state data, scenarios, impact analyses and detailed action plans by community segment (food, energy etc.), I have come to realize that our future is so “unimaginable” that strategic planning is impossible — we cannot begin to know what we must plan for, and if we guess, we will be almost certainly so wrong that our plan will prove mostly useless.

Instead, I wondered if it made sense to have what Don, Rob and Robert called a “Working Towards” plan — specific ideas for helping us (1) build community and increase collaboration and sharing, (2) reduce dependence on imports and centralized systems and increase self-sufficiency, and (3) prepare psychologically and increase resilience for whatever the future holds. The idea was to start doing this within our 40-person Bowen in Transition group, and then engage others, until a majority of Bowen Islanders have acquired this knowledge and these capacities, and Bowen has become a real community. “Working Towards” these three objectives — community, self-sufficiency and psychological resilience — seemed to be something we could all agree on regardless of our ideology.

The more I thought about this ambitious goal, the more skeptical I became. Even if we could get our 40 Transition-savvy members to collectively model this behaviour (when we can’t get most of them to even show up for meetings), how could we possibly scale this up to a couple of thousand people?

As we talked, it was clear that each of us was sufficiently passionate about Transition to stay involved in it to some extent, focused mostly on short-term payback actions in the areas each of us cares about — for Don that includes water, waste management and well-being, for Rob it includes renewable energy, conservation and sustainable technology, for Robert it includes learning and education, and for me it includes livelihoods, transportation, ecological sustainability and self-governance. But as Rob pointed out, most Bowen Islanders are so busy (and stressed) looking after (and out for) family, homes and careers they have no cycles left to do more than vote, sign petitions, and attend occasional information meetings. Transition, even for the aware, is mostly in the “important but not urgent” category.

How do we make Transition urgent, or, if not urgent, at least easy or fun to be involved in in some meaningful way? Robert talked about the value of stories in getting people to a common understanding, which might be a way to create a sense of urgency. He said most Bowen Islanders came here from elsewhere, and their story is mostly about why they came here and what they consciously gave up to do so. 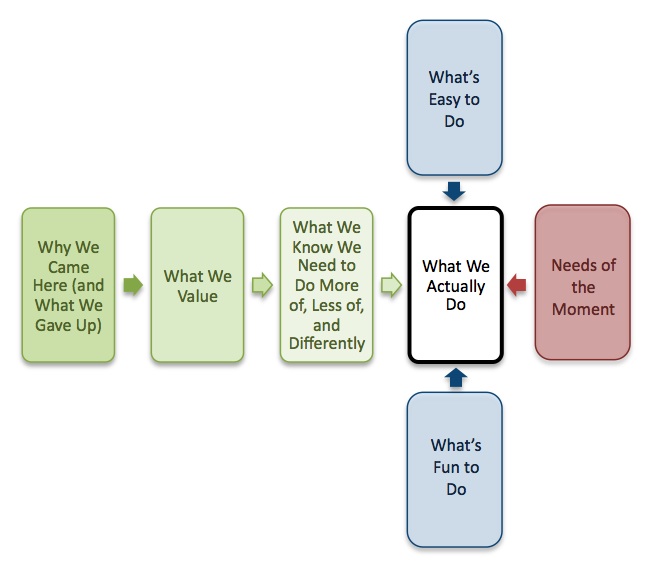 Our story, he explained, reflects and drives our values, and those in turn determine what we think is important to do in the world. Combine that with Pollard’s Law (we do what we must — looking after personal imperatives and addressing the needs of the moment; then we do what’s easy; and then we do what’s fun — what we love doing) and you get something like the graphic above. It explains (left side) why 40 Bowen Islanders gave up a day of their time without much convincing to take our crash course in Transition; it also explains why it’s so difficult to get them/us to do much more.

I talked a bit about Resilience Circles — the new movement that Tree told me about and that Transition US is working with. A resilience circle is:

A small group of 10 – 20 people that comes together to increase personal security during these challenging times. Circles have three purposes: learning, mutual aid, and social action. The economy is going through a deep transition, and economic security is eroding for millions of people. We’re worried about our financial security and about the future we are creating for our children. Many of us aren’t part of communities where we can talk openly about these challenges and fears.

Tree’s group in South Eugene, Oregon, that I mentioned in my post on Building Local Social Capital, exemplifies resilience circles (although it does not call itself that and did not follow the Resilience Circle process). Could such circles be the model that might allow us to bootstrap community to a community-wide scale? One presenter to Transition US suggested that a converging of the Transition and Resilience Circle “methodologies” might allow us to do just that.

The challenge with doing this is that I don’t think you can just go about setting up resilience circles in a coherent and organized way. These are substantially self-organized groups. And unlike Transition groups (which tend to have local champions that coordinate and hold them together), resilience circles appear to be more collectively-managed, with no one particularly in charge or depended upon for their continuance.

The four of us discussed the “magic” of such small “sticky” groups that keep going without a leader or end objective. We each had some experience of such groups — mine was (is) a group that meets monthly for breakfast in Toronto, that I co-founded and which is still going strong without me more than a decade later. It has no leader, and sending out reminders is unprompted and self-organized. It has often had guests, who occasionally join the group, and has had a few larger-group and longer events, but it has generally had about eight members at any one time, of whom usually 5-7 show up each month. Is there something magic about this number, we wondered, as Christopher Allen has suggested (his research suggests ideal size of a working group is 5-7 people and ideal size of a “community” is about 50 people)?

If he’s right, then perhaps instead of trying to create and sustain an Island-wide Transition group we should be looking to create Resilience Circles in each immediate neighbourhood in which one or more of our 40 Bowen in Transition members lives. What would happen if each of us were to call up, out of the blue, our immediate neighbours (whether we know them or not), invite them to a “block party”, and gauge whether there is sufficient interest among them to self-organize a Resilience Circle? This kind of “cellular organization” has worked well for others.

Then, instead of the primary role of Bowen in Transition being Island-wide awareness-building and member recruitment as it is now, it might evolve into a much simpler role of visiting on a rotating basis the 20 or 30 Resilience Circles on the Island, during their get-togethers, suggesting Transition-related activities to them  and sharing “success” stories between/among the different circles. If we could link and network, say, 25 Resilience Circles of a dozen people each, that would be 300 people in the Bowen in Transition network, instead of 40.

The question is whether such a network of circles could evolve into a true model “community”. That raises the question What exactly is a “community” anyway? If we mean it in the sense that we need to “build local community” to be able to take on additional responsibilities when local crises hit and central authorities are no longer able to respond, and to be able to collaborate and share and make decisions in our collective interest, and support each other, then I would say a community is a group of people (around 50 if Christopher is right) who collectively have these attributes:

So today 50 people in an area of 500 people could constitute a community, if it was not too far-flung. And then if and when we find ourselves in a world of multiple crises or total social collapse, these 500 people could re-form into ten communities of 50 people each, with 5 people in each of the new communities having already learned how to live in community, and hence able to show and teach the other 45. They would make natural community “federations” of 500 people, and these federations might, as with indigenous confederations, be granted responsibility and resources from the individual communities for doing certain things that are impractical for a group of only 50 to do.

How many circles, then, does it take to make a community? If a circle is 5-7, it would take 7-10. If a circle is 15 (as in the Resilient Circles model) it would only take 3-4. We can’t prescribe it — it needs to evolve to suit the needs and culture of the people and place, and will probably vary.

But I’m intrigued about the possibility of creating a viable, self-sustaining and intimate Resilience Community from neighbourhood cells up instead of from municipality down. And I’m intrigued about the idea of “Working Toward” Transition not by compiling a plan, but organically by developing commitment, compassion, capacities and a sense of urgency in small federated groups, and allowing their collective wisdom to percolate across, until, in our collective wisdom, we are ready for whatever we, and coming generations, must face in the years and decades ahead.

16 Responses to How Many Circles Does it Take to Make a Community?