The Cause of Our Disease 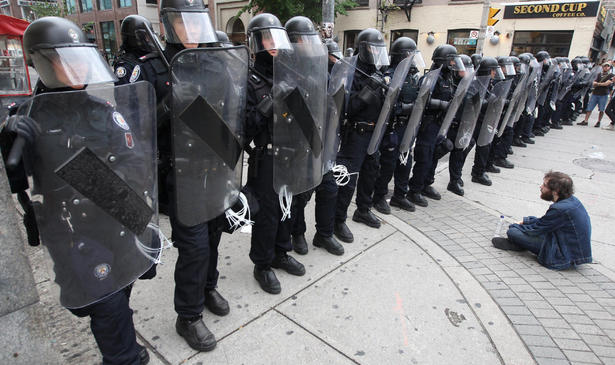 (image: from the toronto star, taken during the 2010 G20 protests, via state of collapse)

You poisoned my sweet water. You cut down my green trees. The food you fed my children was the cause of their disease.
My world is slowly fallin’ down and the air’s not good to breathe. And those of us who care enough, we have to do something.

I work in your factories. I study in your schools. I fill your penitentiaries, and your military too.
And I feel the future trembling, as the word is passed around: “If you stand up for what you do believe, be prepared to be shot down.”

Your newspapers, they just put you on. They never tell you the whole story.
They just put your young ideas down. I was wonderin’: Could this be the end of their pride and glory?

And I feel like a stranger in the land where I was born. And I live like an outlaw. I’m always on the run.
I’m always getting busted, and I’ve got to take a stand. I believe the revolution must be mighty close at hand.

I smoke marijuana, but I can’t get behind your wars. And most of what I do believe is against most of your laws.
I’m a fugitive from injustice but I’m goin’ to be free. ‘Cause your rules and regulations they don’t do nothing for me.

And though you may be stronger now, my time will come around. You keep adding to our numbers, when you shoot my people down.

— Quicksilver Messenger Service, What About Me (1970)

Esteemed evolutionary biologist Richard Lewontin, author of the award-winning Biology as Ideology, which attempted in 1990 to dismantle the illusion of near-perfect knowledge of much of modern science and the arrogance of much of its establishment, more recently wrote a book called The Triple Helix, which brings complexity theory to the interrelationship between genes, organisms, and environments. The thesis of this book is that most of our thinking about all three phenomena is dangerously oversimplified and wrongheaded because it is so difficult to get our minds (even scientists’) around the inextricable connection between them: each creates and is created by the other two, so any attempt to isolate, study and effectively intervene in any one will inevitably result in unexpected results because of impacts from, and on, the other two.

It’s a short but challenging read, and full of interesting information that, with hindsight, appears obvious but when revealed to us seems somehow astonishing. Take for example the idea of the “wind chill”, the effect of high winds on our perception of temperature. Meteorologists use a measure called “feels like” to inform us, for example that a temperature of 0F (-18C) with a wind of 25mph (40 km/h) “feels like” -24F (-31C). Our skin will suffer frostbite proportionally faster. But Lewontin tells us that actually it is only when the wind is high that the temperature “feels like” what it really is. That’s because we constantly walk around within a small self-made envelope or “environment” of heated air, due to our respiration and the higher ambient temperature of our (in cold weather) heat-radiating bodies. So it always “feels like” closer to our body’s normal internal temperature than it really is — except when a harsh wind blows away that envelope of illusory warmth and exposes us to the true temperature around us. This is just one example of this gene/organism/environment complexity. What we call the “environment” is substantially a co-creation of the organisms (including, recently, humans) that have co-evolved within it and which are constantly evolving it in turn.

The most provocative argument in the book, however, is in the chapter on causality, where Lewontin deconstructs some of the simplistic cause-and-effect arguments that underlie much scientific and political “understanding” and decision-making. He writes:

The distinction between causes and agencies can have important effects on the actions that are taken to intervene in human affairs. In the nineteenth century in Europe the chief “causes” of mortality were not cardiovascular disease or cancer, but infectious diseases. The mortality statistics show that the most important killers were diphtheria, smallpox, tuberculosis, bronchitis, pneumonia, and, in children, measles. At the time of the first systematic recording of these sources of mortality in the 1830’s, the death rates from all of these diseases were decreasing, and 90 percent of the decrease had already occurred by the time of the First World War. What was the reason for this dramatic change? It was not the discovery of the pathogens, because there was no observable effect on these death rates after the germ theory of disease was announced by Robert Koch in 1876. It was not the introduction of modern drug treatments, because from 90 to 95 percent of the reduction in death rates from these “causes” had already occurred when antibiotics were introduced after the Second World War. It was not improvements on sanitation, since all these principal killers were airborne, not waterborne, diseases. Nor could the change have been entirely caused by measures designed to prevent diseases from spreading. Measles was the principal fatal disease of children in the nineteenth century, but when I was a child no one died of measles, although every child contracted it.

The most plausible explanation we have is that during the nineteenth century there was a general trend of increase in the real wage, an increase in the state of nutrition of European populations, and a decrease in the number of hours worked. As people were better nourished and better clothed and had more rest time to recover from taxing labor, their bodies, being in a less stressed physiological state, were better able to recover from the further severe stress of infection. So, although they may still have fallen sick, they survived. Infectious diseases were not the causes of death, but only the agencies. The causes of death in Europe in earlier times were what they still are in the Third World: overwork and undernourishment. The conclusion to be drawn from this account is that the level of mortality in Africa does not depend chiefly on the state of medicine but on the state of international production and exchange, although it would be absurd to say that medical care is irrelevant.

The same distinction between causes and agencies is relevant to problems of pollution and the management of waste. When popular and legal action is successful in preventing a particular industrial process that poisons workers or destroys resources or accumulates non-degradable wastes, industry switches to a different process in which other poisons or wastes are produced and other resources consumed. Paper consumes trees and puts sulfites into the water and air. Its replacement by plastic consumes petroleum and creates a non-degradable end product. Miners no longer die of black lung from coal mines as coal is replaced by petroleum. Instead they die of cancer induced by the products of refineries. Sulfites, deforested mountainsides, non-degradable waste dumps are not the causes of degradation of the conditions of human life, they are only its agencies. The cause is the narrow rationality of an anarchic scheme of production that was developed by industrial capitalism and adopted by industrial socialism. In this, as in all else, the confusion between agencies and causes prevents a realistic confrontation with the conditions of human life.

What does this mean for our response, as citizens and healers and caregivers in the modern world? If our attempts to improve the health of those in struggling nations by improving sanitation and access to medicines are misguided, since they’re focused on ever-changing agents of the problem instead of the real cause of the problem (overwork and malnourishment), what should we do instead?

Likewise, if our attempts to improve the “environment” by enacting laws to reduce pollutant emissions and waste are misguided, since they’re focused on ever-changing agents of the problem instead of the real cause of the problem (industrial capitalism/socialism), what should we do instead?

A number of recent research studies have surfaced some distressing and perplexing data about “the conditions of human life” since this book was published:

If Lewontin is right, we should instead be attacking the real causes of these things: Overwork (exhaustion and chronic stress), malnourishment (not to be confused with simple hunger), and industrial capitalism/socialism (and their associated industrial systems, which we’re trying to “re-form” to be what they inherently cannot be). Stress in the poor has been attributed to lack of autonomy (power), manufactured scarcity, and lack of self-sufficiency. Poverty per se doesn’t seem to be a factor, though inequality does. But we are discovering that these causes of horrific environmental and social “dis-ease” are essential, even integral, to the industrial systems we have (mostly with good intentions) created and now utterly depend on.

Perhaps taking refuge in his authority only as a biologist, Lewontin doesn’t proffer ideas on how we might undermine and/or cope with these ‘real’ causes. In the passages above, he doesn’t talk about solutions, but rather about “a realistic confrontation with the conditions of human life.”

He is known to be a Marxist, but Lewontin refuses to allow political ideology to trump his scientific (or logical) judgement. In a 2001 article in the New York Times Book Review, he dismisses the grounds for opposition to GMO crops used by most critics as scientifically indefensible, and is scathing in his review of shoddy anti-GMO research. What he rails against instead is the entire system of industrial agriculture, which he accuses of having reduced the farmer to a life of corporatist servitude. He doesn’t differentiate between the capitalist and socialist regimes that practice this type of agriculture.

If he has any ideas on how his sociopolitical ideology might guide us to assess what could actually be done, today, to rid the world of overwork, malnourishment, the lack of autonomy and self-sufficiency, manufactured scarcity and other chronic social stressors, and industrial capitalism and socialism (and their industrial support systems), he isn’t saying what they are. He’s written scathing critiques of the concepts of social/cultural evolution, which he portrays as pseudo-science, and it is clear that he doesn’t believe that cultures “progress” any more than they “evolve”. Perhaps he’s a believer in revolution. Or perhaps he’s just waiting, with a scientist’s detachment, for civilization to collapse once more, to see what emerges from its ashes.

3 Responses to The Cause of Our Disease