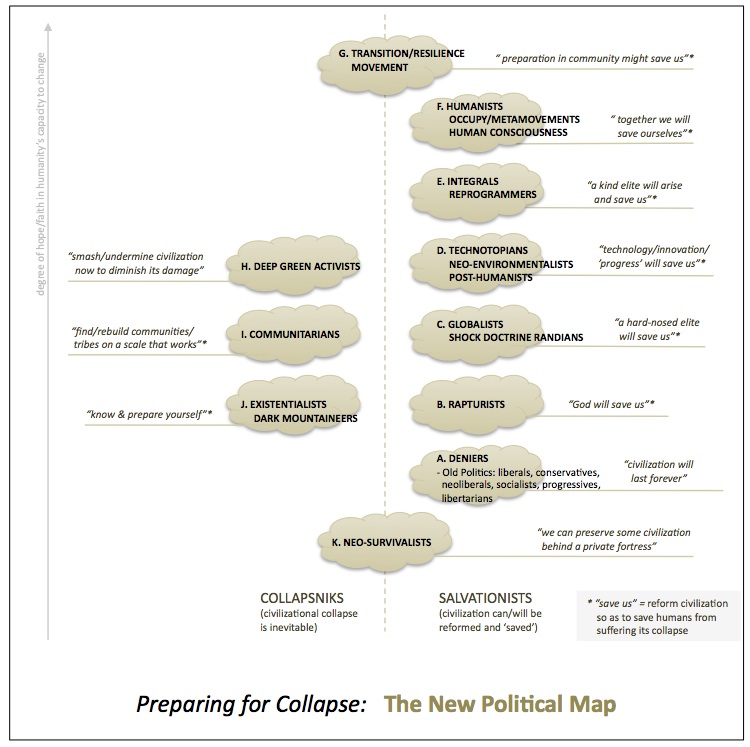 Couldn’t sleep last night. Perhaps it’s my meditation practice — my mind is fighting back against my attempts to quiet it. At any rate I finally gave up, got up, and sketched what was going through my mind. This is it. I think it’s self-explanatory.

In 2008 I was, I think, in camp F, because I believed in the power of the people, unchained.

In 2009 I was, I think, in camp G, because I’d begun to believe collapse was already too far along.

In 2011 I was, I think, in camp I, because I realized the Jevons Paradox effect will negate the effects of any activism, and because I was afraid of being hurt or imprisoned as an activist.

In 2012 I was, I think, in camp J, because I realize that people will start to build real communities only when they have no other choice. The late great Joe Bageant rightly said: Community is born of necessity.

But I haven’t abandoned camp F, because I really want to believe, and really admire Charles Eisenstein, and because fellow phenomenologist David Abram is there.

And I haven’t abandoned camp G, because I really like Transition’s pragmatism, and really admire Rob Hopkins.

And I haven’t abandoned camp H, because my instincts tell me we have to fight, and because I really admire Derrick Jensen.

And I haven’t abandoned camp I, because we’ll have to do this work eventually, and because I’m always trying to get ahead of the game.

But as long as the media and many/most of the people I know are still in camp A, this map gives me some comfort that I’m not crazy, and some sense of where I’ve come from. Hope you find it useful, or at least fun.

35 Responses to Preparing for Collapse: The New Political Map