Falling Off the Edge 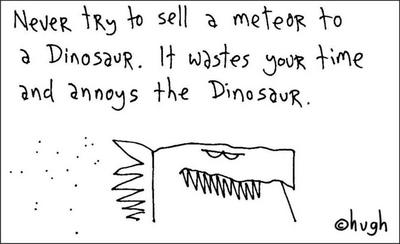 drawing by hugh macleod at gapingvoid

How do you deal with a level of cognitive dissonance so profound that it casts a veil over all your interactions with other people, and makes these interactions seem somehow unreal?

What do you do when you dare not speak honestly about the things you know, the things you believe and care about, for fear the people you’re speaking with will just tune out or turn away? For fear they’ll put some distance between you and them, because they don’t want to talk about it, or even think about it. Because they’re not ready. Or because they just don’t care — or more accurately perhaps they just can’t care.

That may sound arrogant, but it’s not meant to. I don’t claim to have any answers, or a monopoly on understanding how the world really works or what, if anything, we should do about it. I’ve just had the luxury of time, access to resources and a sense of curiosity to find out what most people haven’t been able or willing to explore. It would be nice to talk with people about it. But I can’t.

The mass of mankind is ruled not by its own intermittent moral sensations, still less by self-interest, but by the needs of the moment. It seems fated to wreck the balance of life on Earth — and thereby to be the agent of its own destruction. What could be more hopeless than placing the Earth in the charge of this exceptionally destructive species? It is not of becoming the planet’s wise stewards that Earth-lovers dream, but of a time when humans have ceased to matter.

Science has been used to support the conceit that humans are unlike all other animals in their ability to understand the world. In fact, its supreme value may be in showing that the world humans are programmed to perceive is a chimera.

Humans use what they know to meet their most urgent needs — even if the result is ruin. When times are desperate they act to protect their offspring, to revenge themselves on enemies, or simply to give vent to their feelings. These are not flaws that can be remedied. Science cannot be used to reshape humankind in a more rational mould.

I appreciate that we’re all doing our best. We’re all busy looking after “the needs of the moment” — urgent family matters, work priorities, chores that cannot be put off, trying to cope with our internal demons and the traumas that our culture has inflicted on all of us. As I describe it in Pollard’s Law of Human Behaviour, things considered urgent will always get done before things that are merely important, and merely important things will never get done because once the urgent work is done, we are too exhausted to do more than what is easy and fun. I get that. That was my reality for decades, and I’m not ashamed of what I did, and didn’t do, during that time.

It’s not so much that people are unwilling to acknowledge “inconvenient truths” as much as that people are so caught up in the moment-to-moment crises occurring in their immediate circles, and within themselves, that they simply can’t. They are overwhelmed already, and if they had the intellectual and emotional bandwidth to entertain something more, a discussion of the existential crisis facing our planet (one that we can likely take no action to ameliorate) would not be their first choice. Nor would a discussion of what it means to be human.

When I do find people interested in talking about the matters I usually dare not talk about — civilization’s already-beginning collapse and the accelerating and inevitable sixth great extinction of life on Earth, or the non-existence of self and time — these are generally people who gain needed reassurance about their personal worldviews by debating with others; their objective is to satisfy themselves that you are wrong. They are not interested in listening, or exploring possibilities. And, generally, I am not interested in debating. I just want to share truths as I understand them, not as an evangelist but because it’s through informed and open-minded conversation that we come to really learn and understand, and make sense of things. 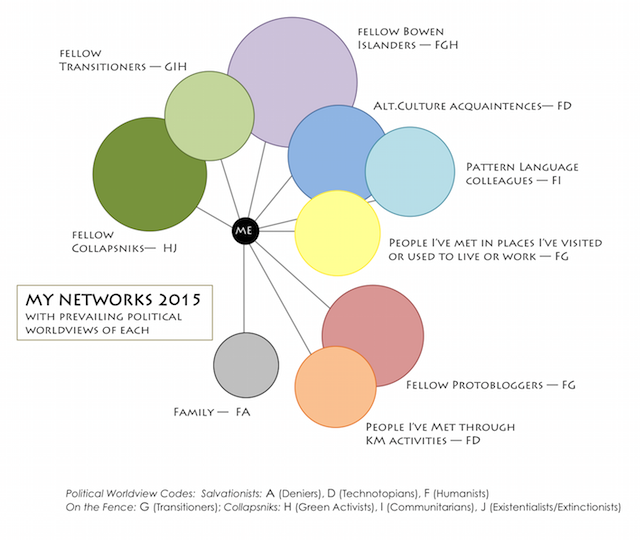 (Worldview codes are from The New Political Map.)

So I talk, with most of those in my circles — the 200-or-so people whose company I keep, face-to-face or virtually, because I enjoy that company (now that I’m retired I rarely have to converse with people whose company I don’t enjoy) — about things that matter to them, about things they are ready and interested in conversing about. I just shut up about the things that are, these days, most important to me. It’s just more trouble than it’s worth.

The metaphor of trying to sell a meteor to a dinosaur, shown in the cartoon at the top of this post, is precisely apt.

And hence the cognitive dissonances. Hence the veil of unreality that pervades my connections with people.

We are social creatures, we humans. We do most of our ‘making sense of the world’ through collaboration and conversation with people we trust and love, with people who share our worldviews. What happens to you when you can no longer have such collaborations and conversations, because your worldview has diverged too far from almost everyone else’s?

In my experience, you give up and accept that your worldview must be wrong, because solipsism is a very fragile philosophy. (That’s especially ironic for me when one of the subjects I long to talk about is the complete illusion of the self. I’d make a lousy solopsist.)

The alternative, of just dwelling alone (at least among humans) with this too-far-ahead (or completely insane) worldview, is probably unhealthy. I feel sometimes as if I’m becoming invisible, or going mad. As if I’m falling off the Edge I began living on a dozen years ago when I started to explore the subjects of this blog. I feel incredible frustration struggling to come to grips with an intellectual understanding that is at once mind-blowing and seemingly impossible to grasp experientially, when there is no one to really share it with.

What I long to do is to move past a discussion of the inevitability of civilizational collapse and the sixth great extinction, and the illusion of self and time, and discuss what does it mean?. Not what can we do about it, but what does it mean?

What does it mean to live in the final generations of a two-millennium long civilization that has grown global and monolithic, substantially eradicating all alternative cultures in its wake? What does it mean to witness the culmination of a thirty-millennium long (not very long in Earth terms) rapidly-accelerating extinction event, the first in 65 million years, that will transform the face of the planet?

What does it mean to be a self-perceiving human ‘individual’ and realize that one’s ‘self’, one’s sense of separateness and self-control from the rest of life on Earth, is a useful and convenient illusion that doesn’t really exist? What does it mean to appreciate that the qualities that most distinguish humans from other creatures — this sense of self, of ‘mind’, of separateness, of ‘consciousness’, and the sense of discrete, linear time — are massively-simplified constructions of the human brain that are not only unreal, they actually create a separateness and an incapacity to realize what is actually real, an incapacity to just be in the world that ‘less intelligent’ creatures aren’t hampered by?

Of course, what these things mean ultimately doesn’t matter. The more-than-human world is indifferent to our struggle to make sense of things, to appreciate their implications. An appreciation of these things won’t change the course of events, won’t change anything in fact.

Or maybe, for us poor too-smart-for-our-own-good creatures, it could change everything. Perhaps an appreciation of these things could allow us to rejoin the community of all-life-on-Earth, transcend our self-inflicted misery and suffering, and re-learn to just be, presently and joyfully as a part of it all.

Maybe. I don’t know. There’s only so much you can figure out talking to yourself.

17 Responses to Falling Off the Edge