The Paradoxes of Presence 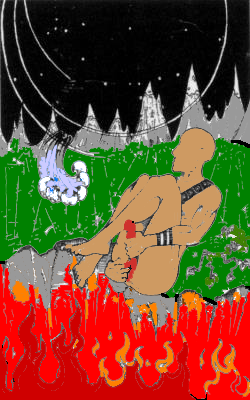 “The Fool” tarot card in Ylva Trollstierna’s “erotica” deck depicts a hermaphrodite “fool” on a precipice somewhat different from that shown in most tarot decks;
I’ve colourized the image

One year after beginning a personal Presence practice, what is most apparent to me are the paradoxes of striving to realize it:

Mooji discusses these paradoxes with a metaphoric story: We are at the door/gateway to realization, to awakening, but just outside there is a large, noisy market with hundreds of people trying to sell us things, enticing us with delicious smells and wonderful promises, so we hold back, keep looking at these offerings here, on the known side, the comfortable side, the unconscious side. We decide we are not quite ready to go through, to see what is on the other side.

So we stay, promising ourselves that soon, tomorrow, next week, next year, we will be ready, we will go then.

And there are so many of us here! And some of them claim to have awakened, to be enlightened, to be teachers; so why are they still here?

The transition from that to, at first, the occasional arising of something else — that heightened alertness or aliveness that replaces thinking (in which thinking can still take place but is no longer compulsive). It’s a space where really thinking is unnecessary. You have risen above thinking. That is the awakening.

8 Responses to The Paradoxes of Presence