Goodbye Dave: Letting Go of the Story of Me 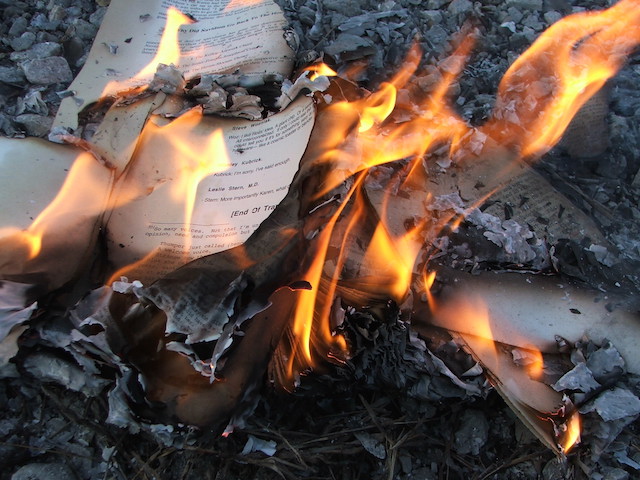 image from wikipedia, creative commons CC-BY-2.0
Relax, no, I’m not suffering from a terminal illness, or contemplating suicide, or stopping blogging. What I’m doing is looking critically at the Story of Me, and acknowledging that it is just that — a story, a creative fiction, an invention.

I’m doing so because I realize that over the decades I’ve become pretty attached to, and pretty invested in, this story. I tell it in my bio, I tell it to new people I meet (often in the hopes they’ll be impressed), and I tell it to myself. I’ve realized that I am not my ‘self’, my identity, and it’s time to let go of the story that keeps me clinging to it.

Here are the major elements of this story, in roughly chronological order, and my debunking of them:

It’s an interesting, heartfelt story, but I really have no idea if any of it is really true. It is likely just an invention in hindsight to try to fit the facts and make ‘me’ look valiant. I remember some times, mostly in early childhood, that seemed serenely happy, and being unhappy and often depressed much of my school life and work life. But no more than most others, I suspect. Triggers are supposed to stem from childhood trauma and I’ve had my share of bad moments, but I don’t remember much, really, and have no idea if I was really traumatized. Mostly I was just bewildered, unable to make sense of anything, muddling my way through, and quite fearful and socially anxious as a result.

This story is pretty heavily embellished. In retrospect my work career, like those of just about everyone I know, was pretty much a waste of everyone’s time. I was not a particularly competent spouse or parent. I got lucky a lot. Same synopsis: Mostly I was just bewildered, unable to make sense of anything, muddling my way through, and quite fearful and socially anxious as a result. My illness caused me to wake up somewhat to my obliviousness to life. My blog has been an enjoyable hobby, but it if was all suddenly lost, I really wouldn’t, now, be too upset. I’ve written nothing outstanding or particularly important, novel or insightful. My book was likewise fun to write but, in the end, unsuccessful, full of good ideas that are really hard to implement.

This story is overly precise, significantly exaggerated and unduly self-congratulatory. It is written, as I suspect most of our stories are, to create the impression of having made some progress. Lots of furious effort trying to make sense and meaning of the world and of myself, but really nothing to show for it all. I lack the qualities of emotional intelligence and empathy needed to be a good lover or friend, and though my new loves seem willing to settle for consistency and generosity from me, I wouldn’t (and don’t) blame them for looking for something better in a relationship. I’ve had some interesting insights, ‘ahas’, but lack the capacity to express them articulately and practically in ways that can be of use to anyone. I have fancied myself ‘too far ahead’ of most others to be able to explain my ideas to them, but the truth is I’ve just been immensely fortunate to have had the time and resources to think about things, and for all that I’m not particularly good at doing so.

This story is the most preposterous of all, a pure fantasy. Like all future-state stories it is an invention, a dream. We can’t predict or control what our future will hold. It doesn’t follow from our past story, which in any case is also a fiction.

This isn’t meant to be self-pitying or false modesty. It’s just an honest realization that my life doesn’t add up to much, and isn’t ever likely to. I think everyone’s life story, the story that people (especially ‘leaders’ and celebrities) tell of what they’ve done and who they are, is absurdly self-aggrandizing, redacted, and mostly wishful thinking. What we think and what we say and what we do don’t really make any lasting difference, and I sense it’s hubris to believe otherwise.

My story, and I would guess everyone’s story, is ultimately utterly insignificant. A more modest Story of Me might be:

My whole life I have been bewildered, unable to really make sense of anything, just muddling my way through, and I have often  been quite fearful and socially anxious as a result. I have put great effort into many things but have nothing much to show for it. I’ve had some interesting insights, but nothing that’s of much practical use to anyone. I have been generous, but only when I could easily afford to be. I’ve been very lucky. I have become more joyful and fun-loving, but more pessimistic, more curious, and more skeptical about everything, even whether we as separate ‘selves’ actually exist.

In other words, a life of mostly selfish, fruitless, directionless struggle. Sounds about right. Doesn’t seem to be a story that should be hard to let go of, does it? And yet even this more ‘modest’ Story of Me is just a story. It is just the mind’s desperate pattern-finding, meaning-making, a connecting of events and an association of this series of events with a person. Unreal.

What then, would I put in my bio? What would I offer as my history and credentials to potential project teammates or employers? What amusing personal tales would I tell to people I’d like to impress? What would I tell myself in deciding what I should do next?

Some non-dualists refuse to offer a bio at all, claiming that to do so would contradict their message that the separate self is an illusion. But that usually comes across as kind of a smokescreen for not having any credentials to back up their message. More often, they offer a somewhat apologetic bio for the separate self that they now realize and admit does not really exist. People want to know their ‘teaching’ credentials, and also want to hear the story of how they seemingly achieved that realization, even when they accept that there is no real path to it, that it just happens. They are not particularly interested in their messengers’ modest, ‘utterly insignificant’ story.

Why do we want to hear each other’s stories? Partly it seems it’s how we relate to people, to discover what commonalities our stories have. If I let go of the Story of Me, will no one want to relate to me anymore? Will I be unable, without this story, to relate to anyone? If I am speaking with people and assert or reply that I have no story because there is no ‘me’ and that I have no aspirations because time does not exist and that it’s pointless to care or worry about anything because there’s no free will and everything is already perfect, it’s likely to be a short, useless and unpleasant conversation (especially if I insist on putting every pronoun, and the subject and object of every sentence, in quotation marks).

It is not condescending or dishonest, I would say, to speak with people in a shared ‘dualistic’ language, even if you think some of its premises are suspect.

I was invited to write a proposal for a presentation this fall on the role of stories(!) and other techniques to elicit genuine change in people’s beliefs and behaviours. A credible bio would have been part of the proposal. It’s a subject that interests me greatly. I am torn about whether to try, but if I do both the bio and the presentation will be, almost certainly, inauthentic, full of the Story of Me. And if I don’t try, I will be troubled about whether in my obsession with non-duality I am disengaging from people and ideas that are at least fun, even if they are probably not really useful. What’s the harm in play, even if it’s a bit disingenuous?

Likewise I have recently met some people whose company I really enjoyed, and to engage with them I told the Story of Me in all its practiced and thickly-varnished glory, still half-believing it myself. In so doing I passed off things that I have come to tenuously believe (things such as Pollard’s Laws*) as things that I have learned, as truths, as personal wisdom. These people clearly liked my stories, and they liked my self-assurance in telling them. What if the next time I meet someone like that, someone I’m intuitively drawn to, I refuse to tell the fictitious Story of Me? What if I just take them on interesting walks, listen to their story, ask them questions, sidestep questions about myself and refuse to offer any credentials, any advice, any personal ‘wisdom’? What if I ‘depersonalized’ my beliefs, my truths, by reframing them as just interesting observations, removing them from the Story of Me?

Without the Story of Me, would I come across as mysterious and interesting, or as evasive, a suspiciously blank slate? Would people like the more authentic, more modest, less talkative not-‘me’ as much as they like the richly storied ‘me’, enough to forge enjoyable new relationships? And what about the people who already know ‘me’? Without the Story of Me, will they still know ‘me’? Will they find the story-less not-‘me’ as lovable? Will they fear that the more authentic not-‘me’ might no longer love them?

And ultimately, perhaps, without the Story of Me, what if anything will be left of ‘me’? Will what is left do anything differently, make different decisions? My sense is that the answer to all these questions is that nothing of consequence will appear to have changed, because beyond the story, the fiction, there never was anyone here to change to begin with.

Or at least that’s my story.

11 Responses to Goodbye Dave: Letting Go of the Story of Me