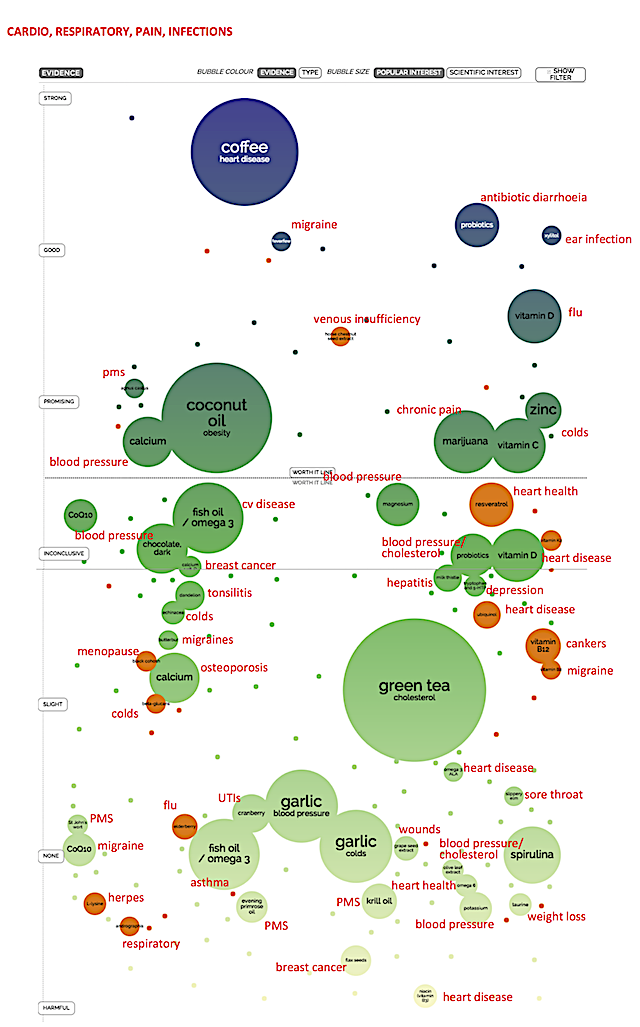 Screen capture of part of the interactive Information is Beautiful visualization “Snake Oil Supplements”. The static image above shows only the results for tests related to cardiovascular and respiratory diseases, pain and infections. The disease or condition for which the supplement was evaluated is shown beneath the name of the supplement in the circle; where the visualization did not have space to identify the condition, I have added it beside the supplement name in red. Please click on the circle on the original visualization for details of the precise conditions evaluated, and links to the specific tests/trials/studies that the evaluation is based on.

David McCandless regularly updates his “Snake Oil Supplements” data visualization, that shows graphically the results of many double-blind clinical trials and other tests of the efficacy of many supplements — herbs, plant extracts, vitamins, minerals, hormones and other commercial products, most of which are not regulated or inspected by the US Food & Drug Administration. It’s a stunning piece of work worth admiring in its own right (as is much of the other work on the Information Is Beautiful site).

The credits for this visualization are:

A whole bunch of caveats (some theirs, mostly mine) to consider before anyone should put stock in this data:

I’m a believer that the best way to stay healthy is to take the primary role in the self-management of your own health. That means carefully monitoring what works for you, and researching and double-checking anything a health professional (or commercial vendor!) tells you. It means focusing on staying healthy, rather than scrambling for treatments when you fall ill. It means tracking your whole-body health (physical and emotional), eating well, exercising regularly, and doing other things that humans did to look after their health for the million years before the industrial health care system emerged. Although human health is likely better now on average than at any time since civilization (and disaster agriculture) began some thirty millennia ago, there is evidence we’re still much sicker than “prehistoric” humans.

When I contracted ulcerative colitis in 2006, self-management was critical to my recovery, and it has been largely responsible for my complete remission since then. I tried over two dozen suggested medicines and supplements during my recovery, and used regression analysis to determine that only two of them (mesalamine, a non-steroidal anti-inflammatory related to aspirin but with a lower bleeding risk in long-term use, and low-dose iron) actually improved (or prevented worsening of) my health. The regression analysis likewise indicated the value of regular weekly (10km running and/or 6 hrs fast walking) aerobic exercise, additional core/upper body exercise, good sleep, a healthy whole-plant-based diet (vegetarian, and vegan since 2010), and other stress-busting activities.

Most of the supplements I tried provided no clear benefit (I eliminated them one by one, and then added them back one by one as a double check on their efficacy). This is consistent with the findings in the visualization — that most supplements are ineffective for most people. This is likely true for a complex set of reasons: Nothing works for everyone, many people get what they need from their diets and don’t need (sometimes absurdly expensive) supplements, and many people are ill because of poor diet and poor lifestyle dating back decades, and are unlikely to benefit dramatically from changes this late in the game.

Our bodies evolved over a million years to be optimally healthy just from eating what was available locally. Why would we imagine that exotic substances ingested now would somehow improve on what nature and evolution have given us?

In my last post I mentioned Nutrition Facts, physician Michael Greger’s non-profit volunteer-driven organization whose aim is to encourage more research into how healthy nutrition can prevent or delay almost all of the diseases that kill and sicken us in affluent nations. His speeches are well-researched, immensely insightful, evidence-based, and entertaining — well worth your time to explore (and most of his videos have transcripts, so you can choose to watch or read, whichever you prefer).

A few of the things I’ve learned from his research:

It’s becoming increasingly clear that none of the health care systems in affluent nations is sustainable. The American system is by far the worst, for reasons I’ve talked about before, and headed for collapse, no matter which party is in power. The Canadian system, which now covers only the costs of physicians, hospital care and surgeons (not alternative medicine, not prescriptions, not physiotherapy, not dental care, not eye care, not psychological therapy — ie less than half of most citizens’ total health costs) is not far behind, squeezed by out-of-control increases in drug costs, antiquated infrastructure, and, yes — over-dependence by patients.

The self-management process I follow is rare. Doctors I’ve spoken to say that if every patient followed my example the system would be fine, but few have the time, research skill, and practice looking after their own health, even jointly with their doctors, to do so. Some are completely (and deliberately) dependent on expensive medications for chronic, lifelong diseases (exactly as Big Pharma wants us).

The health systems as we know and depend on them are going down. They’re bloated, exploited by greedy pharmaceutical companies, burdened with obsolete infrastructure, fragmented rather than holistic in patient care, preoccupied with expensive cures for diseases of the very rich, and with the “war on drugs” (forcing doctors to try to solve the social problem of prescription painkillers appropriated by citizens struggling with untreated mental health issues and inadequate social support systems), unbalanced in its generalist/specialist mix, overextended (Canadian GPs can only bill the medical system for 10 minutes for each patient they see), demoralized, over-regulated in some places (thanks to lawyers and insurance companies terrifying health practitioners with opportunistic malpractice suits), under-regulated in other places (eg unscrupulous doctors trying to build their reputations by using clueless patients as guinea pigs for potentially dangerous ‘novel’ procedures), adulterated by fear-mongering hucksters of worthless-to-dangerous ‘alternative’ potions and treatments to vulnerable, ignorant customers, and utterly inflexible. It’s beyond reform.

When, like the rest of our civilization’s unsustainable industrial systems, our health care systems come apart, and are just abandoned by bankrupt governments and insolvent insurance companies and HMOs, leaving us to our own devices, if we aren’t prepared to take care of ourselves and others in our communities, we’re in for a rude shock. In health matters as in everything vulnerable to collapse, resilience starts with personal self-management, and then moves to community-based self-sufficiency. We have a very long way to go.