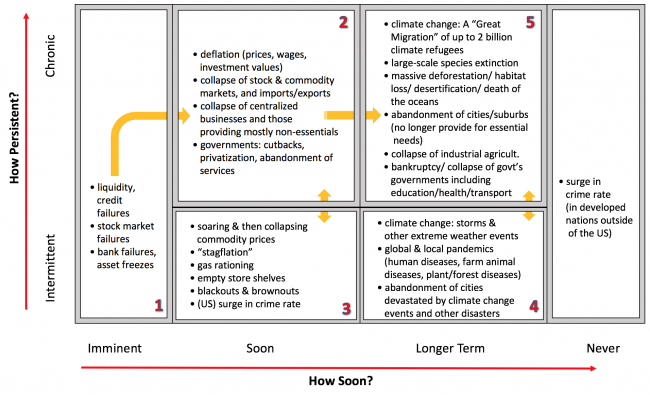 It’s been a while since I posted about the collapse of our industrial civilization. Background is here if you’re interested in my take on how it will occur, due to the interconnection between our global economic and energy systems and the planet’s vulnerable ecology.

My reason for posting this update is a number of conversations I’ve had with fellow “collapsniks” about whether or not the (IMO insane) gun culture of the US will mean that collapse will unfold differently there than it does in the rest of the world. My current guess is that, yes, sporadically for a while there are likely to be surges in gun-facilitated crime in the US that the rest of us won’t see, but in the long run it’s unlikely to make much difference. When everyone’s boat is sinking, stealing someone else’s at gunpoint doesn’t help you.

In recent months politicians, government agencies, corporations and mainstream media have been furiously working to persuade the poor dumbed-down, exhausted populace that our industrial growth-dependent economy is “healthy” and “vibrant”, that debt levels are “manageable”, that “the myth of peak oil is dead”, and that climate change either isn’t a problem, or everything possible is being done to avert it. This is all self-serving nonsense of course: the true statistics on the economy are really scary, debt levels of both governments and consumers are utterly unsustainable, inequality continues to soar, along with all the social and political risks that entails, the looming end of affordable energy remains critical and substantially unaddressed, and climate change continues to accelerate on its runaway course.

We are living on borrowed time. “Borrowed” from the banks, “borrowed” from struggling nations, “borrowed” from future generations, “borrowed” from exhausted land, soils and seas, “borrowed” from all the species we are rendering extinct, and “borrowed” from the disenfranchised poor, sick, gullible and uneducated. Our economy is based on the presumption of endless double-digit growth in production and income to repay today’s lenders and investors (without which neither stocks nor bonds have any real value). Since it began, every bit, 100%, of our global industrial culture’s “growth” is attributable to ever-accelerating use of cheap, readily available energy. The Ponzi scheme that is our global industrial economy is way overdue for collapse. For a while longer — a year, a decade perhaps — those investing in this economy will continue to believe the impossible story that the value of their investments can not only be repaid, but repaid with profit. Or that, at least, someone else will be willing to take their position when their doubts get too great, and will keep the scheme going a while longer.

What is important to note, however, is that this collapse will not be an overnight global phenomenon that will produce a Hollywood dystopia — it will occur slowly and sporadically, in fits and starts, over the coming decades. And this time there will be no “recovery”. Financial collapse will precipitate a long and slow and finally permanent emergency: economic, political, technological, educational, health and ultimately social collapse. It will be the collapse of our now-global civilization. The collapse will take decades, but it will be without hope of recovery: rebuilding new human societies and cultures from its ashes will take millennia, and transpire based on a much smaller, relocalized and diverse human population. This is nothing new, of course; it is the story of every human civilization that has ever arisen on our planet.

I wanted to try to present an alternative portrait of collapse to the sensationalist, simplistic, Mad Max, dystopian story that those who haven’t lived through an economic collapse imagine will happen — they imagine the sudden, sensational, violent end of what most now think of as the only way to live (ie industrial growth capitalism), and degeneration into chaos, brutality and (we should be so lucky) “anarchy”. There is a far more likely scenario, based on what has happened when previous civilizations have fallen — not overnight, but rather slowly, unevenly, and mostly peacefully, as the edifice built on an unsustainable foundation gradually but inexorably grinds to a halt. The chart above summarizes that portrait. I will walk you through what it portrays. But first, I want to introduce a thought exercise to support some of my predictions.

Suppose I asked you to play a game. There’s a very large jar with an unknown number of marbles in it, covered with a cloth, with a spigot at the bottom that dispenses the marbles. The object of the game is to ensure every player has at least one marble at all times, and the “winner” of the game is the one with the most marbles when the game ends — ie when the jar runs out. You have no idea how full of marbles the jar is. On your turn you have two choices: to stick with the marbles you have, or to “invest” one or more marbles (putting them in the top of the jar), and then turn the spigot that many times, and collect the marbles it dispenses. The number dispensed varies from zero to several. Seems simple enough, right?

But now let’s add a wrinkle. Every second turn a certain percentage of your marbles are “depreciated” — they lose their value and are taken away from you and placed in a second jar of the same very large size, called “waste”. And when you run out of marbles, you’re out of the game. And there’s a second wrinkle: Every round, another player is added, and collectively the players have some responsibility to ensure there are always enough marbles for everyone (after all, that’s the objective of the game, which is now somewhat at odds with who is the “winner” of the game).

To make this game a little less depressing, we’ll add a third wrinkle: the game-master (who is not a player in the game) uses a random number table to determine how many marbles (from a secret stash no one else can see) to add back to the jar after each round; that could range from zero to enough marbles to fully replenish the jar, but none of the other players can see what is added. Can you feel the stress building, and the seemingly optimal strategy shifting?

Now you have some players saying there are so many marbles that the focus should be on getting lots of marbles out of the jar — after all, those with lots of marbles could “donate” some to those running out. The secret stash could be infinite, right? So let’s keep that spigot turning! But others point to the quickly filling “waste” jar and say that no stash is infinite, and that rather than giving every individual a choice each turn, there should be a collective decision on who gets to turn the spigot that round, and how the total number of marbles received by the collective should be distributed. Suddenly the game evolves into two separate games — one group whose members are free to make their own “selfish” decisions, aiming to “win”, and another group agreeing to be bound by their collective decision, aiming to keep the game going so that everyone “wins”.

Let’s add one final wrinkle — the fuller the “waste” jar is with marbles, the fewer new marbles the game-master adds proportionally each round (using a mysterious algorithm only the game-master knows). Once the “waste” jar is full, no more marbles are added! At the same time, each round a certain (but quite small) percentage of the marbles in the waste jar are “restored” (removed) by the game-master, and possibly they are added back to the secret stash (that’s up to the discretion of the unfathomable and indifferent game-master, who always “bats last” after all the players have had their turn).

Now you’ve got players running simulations and models to tell the others whether to turn the spigot or not on each turn (guess what we call them?), though of course these models make all kinds of assumptions, and few people understand or pay attention to them. And there are players trying to get the game to reach a “steady state” where the “waste” jar never gets quite full and the game goes on forever, but few players pay attention to them either, and it gets harder and harder each round as another player is added.

You get the idea. Now let me walk you through the 5 boxes in the chart above, which the marble game is a highly-imperfect but useful model of. Gotta love metaphors.

I offer no solutions to this predicament — I don’t think it’s in our power to change it, for a whole series of reasons I’ve written about ad nauseam elsewhere. If we were to play the marble game I think we’d see the same scenario playing out, and learn that, despite how fascinating and engaging the game is, it can ultimately have no winners.