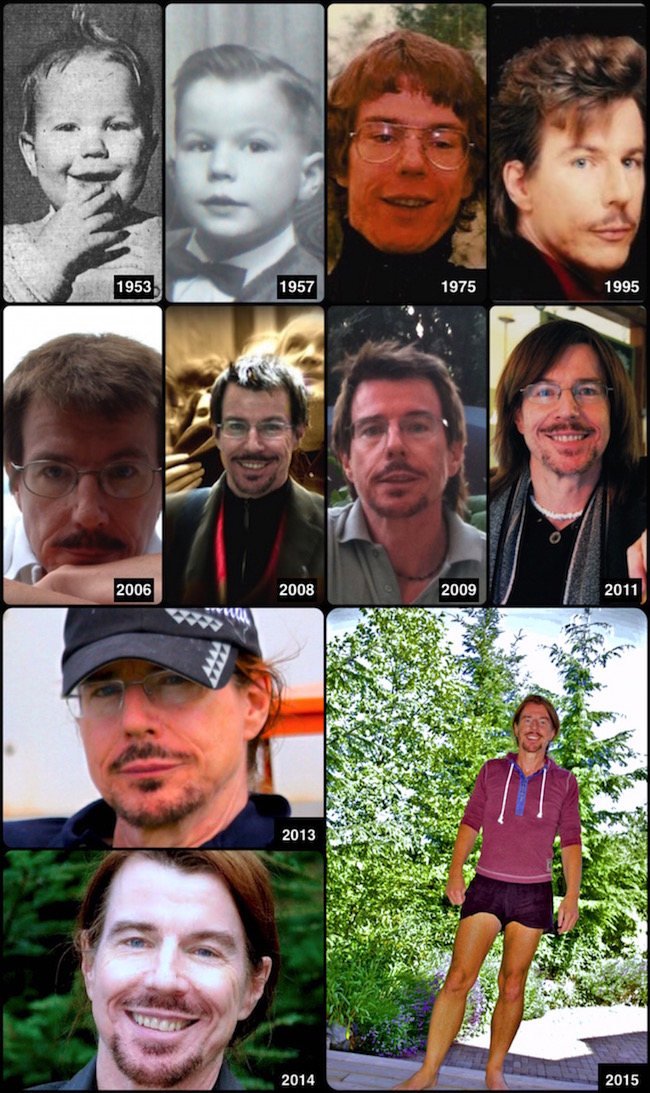 Today I turn 64. In many ways I have come full circle: I feel closer to the not-quite-2 year-old in the first picture above than I have ever felt since. I have been unimaginably blessed — by the fortune of my birth, by the people and events and opportunities that have come into my life at just the right moment, and by my good health.

I have been tracking my fitness, my weight, my overall health, and my level of happiness for over 40 years, since about the time of the third picture above. I’ve always loved collecting and playing with statistics (the mathematical mind’s way of patterning, I suppose), and since I began running 10k/week seriously in the early 1970s I guess I’ve just kept at it. You can ‘age-adjust’ your running performance using ‘WMA’ tables (stands for World Masters Athletics, the group that compiles this data), which tell me that over the past 40 years my speeds for 5k and 10k runs have varied between a low of 42% (while recovering from colitis in 2006) and a high of 60% (which I’ve achieved often, on and off over the years) of the speed of the world record holder for my age.

That may not sound spectacular, but it puts me in the top third of people my age doing regular competitive running. Metabolically I’ve always been a sprinter, and have always been able to run competitive-level speeds over 100m and 200m, so I’m quite content to stay at 50% or more of age-adjusted world record speed over long distances. When I fall below that, I know I’m unwell. Yesterday my WMA score for the 10k was 58%.

When I think back on my life so far, there have been 5 major turning points:

And here I am, in 2015, feeling on the edge of a sixth great turning in my life. I have no idea what it’s about, just an intuition. I don’t expect my personal relationships to change, nor do I expect any of the kind of life-changing events I experienced in 2010. The change, this time, is likely to be an inner one. I thought it would be a shift to a state of greater equanimity, calmness and reflection, that would make me more useful to the world than I fear I have been so far, and more personally content.

But I’m not so sure. The most joyful times of my life have not been the most contented, calm or peaceful. I’m most alive when I’m on the edge, as much as that state terrifies me. I do know that whatever happens next will be what was inevitable, and totally beyond my control. I’m the happiest and healthiest I’ve ever been, so I think I’m ready. Bring it on, world.

The title of this post comes from my soul song, Neil Young’s Will to Love.